Everything I Know About Politics, I Learned From Watching the TV Sitcom "Benson" 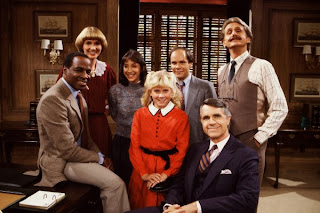 Everything I learned about politics, I learned from TV. Specifically sitcoms. Fucking Hollywood, always trying to brainwash American children. So I grokked everything I know about politics from a sitcom called Benson, which aired on ABC from 1979-1986. It was a spin-off of Soap, where Robert Guillaume played a butler employed by the crazy Tate family. Guillaume fell into a stereotype role of the "wise-cracking black guy."

In Benson, the show was centered around Robert Guillaume, who is no longer a butler and instead he works in the governor's mansion with some random title. The Governor is a bumbling goofball who can barely tie his shoes, let alone run New York. I assumed he was the Governor of New York, because that's where I grew up, which meant that Benson lived in Albany at the Governor's mansion.

The real reason I watched Benson was because of a budding infatuation with the Governor's daughter (played by Missy Gold, the older sister of Tracy from Growing Pains). I had a semi-crush on her, so I got sucked in by the blonde. But along the way, I learned about how politics worked then and still works to this day.

In every episode, there was some sort of crisis because the inept governor was incapable of getting the job done. It was obvious that he was an airhead, or puppet propped up by the machine (or big business). Whenever the shit hit the fan, it wasn't the smarmy and sketchy governor's aides in cheap suits who solved the problem. Most of the time, they were the problem. Week after week, Benson would swoop in during the third act and save the day. Benson was a deus ex machina and "mythical magical negro" combined in the same character.

Here's a random episode from Season 1 which touched on Cold War relations between the U.S. and Russia...


Sitcoms were created as low hanging fruit and catered to the the lowest common denominator, but regardless of the corniness or simplicity, sitcoms are a sure-fire way to tap into America's consciousness. Regardless of the outcome, Obama needs to thank Benson for helping pave the way for a black man to hold a a high-profile elected position.

So what did I learn from watching Benson?


1. I always had a thing for blondes.

2. Politicians are dumb as fuck old white guys who can't even make a sandwich, let alone run a state.

4. The savvy black man saves the day. Always. Yet the "Man" always gets the credit.

For more about Hollywood's infatuation with mythical negro, check out my half-baked thoughts on Bagger Vance.
by Pauly at 9/26/2013 04:20:00 PM