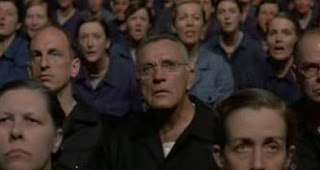 Seinfeld joked about uniforms in the near/far future. How all the sci-fi books and movies envisioned post-dystopian humans clad in a drab jumpsuit or some sort of other bleh uniform. Like out of 1984, or something that makes everyone look like a mechanic at Pep Boys.

The way the job market is going in America, by the time the "Roaring 20s" roll around there will be zero media jobs available (news anchors will be replaced a naked pornstars reading Tweets). So we'll all end up a slave to the Man and stuck in the service field humping a horrible min-wage McJobs at McDonald's or Starbucks or IKEA. Unless you want to work the oil fields in the Dakotas, you're shit out of luck and stuck asking shithead customers if they want to supersize their order or add whipped cream. At those McJobs (pick any fast food joint or big biz coffee chain like Starbucks or Coffee Bean), the "uniform" includes some sort of polo shirt with a big-ass logo to make you feel like a loser and to remind you who is the real boss. Oh, and how could we forget about the humiliating name tag? Just in case the laughable pay and the never-ending line of surly customers and the awkward-looking clothing did not drag  you down to the lowest rung on the self-esteem ladder, they have a giant name tag to finish off the job. The name tag is to confirm the fact that you really are a cashier at Starbucks which some of the more successful classmates and kids you grew up with has suspected but wasn't 100% sure because you ignored their FRIEND request on Facebook.

Whenever I see someone with a name tag, I have this weird compulsion to use their real name as quickly as possible during the interaction. Part of me wants to humanize the transaction, instead of it being impersonal and ice cold. There's a percentage of workers who appreciate the fact that someone in the real world is recognizing them as a person instead of a min-wage flunkie. At the same time, I'm sure I pissed off an even greater number of service workers who went apeshit bananas whenever someone tried to call them by their name from the name tag. Sure, they might be polite and shine it on, but underneath it all they are cursing you under their breath and secretly plotting how they can drop a couple of boogers into your Iced Mocha.

The universal uniform could be cool in the future because it eliminates the difficult decision-making process of trying tof igure out what to wear. The older I get the more paranoid I get that I'm going to lose my edge in the fashion department and that my clothing style and wardrobe will stop evolving and become frozen in time for the rest of my life. It happens to everyone old guy, which is why old dude in Florida are wearing Leisure suits and Members Only jackets. The grey jumpsuit will eliminate a daily struggle that I have... what will I wear? This is problematic as a freelancer who does not have to get dressed up to work in an office-like setting. For me business casual is putting on cargo shorts instead of free balling it. 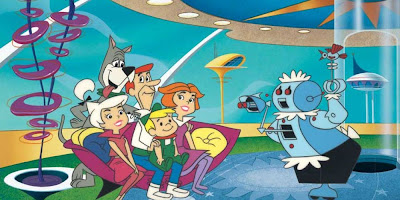 Since I'm on a Seinfeld sci-fi tangent, I'm waiting for every household to get its own robot. Sort of like Rosie from The Jetsons or Twinkie from Buck Rodgers or CP30 in Star Wars. Except I would program mine to crunch spreadsheets and sports stats so I could have a live-in sportsbetting guru, who runs a million simulations a second. I already have a special spreadsheet that spits out a projected outcome for almost every major pro sport, but that is like using counting blocks for 3 year olds compared to a computer system on board a  NASA rocket.