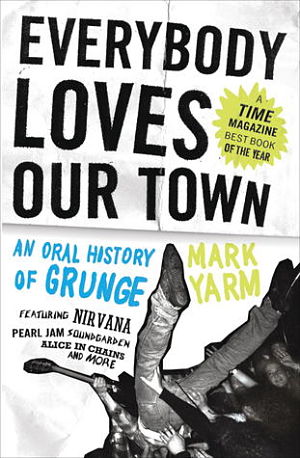 I could not put down Everybody Loves Our Town: An Oral History of Grunge by Mark Yarm.

The locals and musicians involved in the Pacific Northwest's music scene hated the word "grunge" but that's what stuck. Two decades later, survivors sat down to talk to Mark Yarm to deliver the oral history of the raging scene from the Pacific Northwest 80s and 90s, which blended punk and heavy metal into something bong-shattering and loud as fuck.

The suits (e.g. record execs, MTV, and radio big-wig) overused the buzz word "grunge" to describe the fuzzy, distorted hard rock scene that seemed to have its epicenter in Seattle (specifically around the Sub Pop label). When the money people from Hollyweird and NYC got wind of Seattle, they invaded the town, threw a ton of cash around, gobbled up bands, and got the fuck outta dodge. In a flash, that malestrom was all over.

Members from the biggest bands (Pearl Jam, Nirvana) were quoted, but they do not get as much coverage, which is cool because there's plenty of material out there about both bands. The major emphasis is on the scene as a whole... not the bands who "made it big."

A significant amount of the book was dedicated toward the second-tiered bands like Mudhoney, Screaming Trees, TAD, and L7. Those were some of the most compelling stories because those bands were constantly struggling with addiction, creative issues with their labels, and the rigors of constant touring.

There was a fair amount of discussion about Soundgarden and Alice in Chains, but it had more to do with the formation/breakup of Soundgarden and Layne Staley's addiction issues.

The book also went deep into the Seattle scene and talked about Green River, Mother Love Bone, The Melvins, U-Men, and Skinyard. The tragic story of Andy Wood, the Mother Love Bone singer who OD'd, is one of the main storylines in the first half of book. Other bands getting some love... The Gits, Supersuckers, and Cat Butt.

Hundreds of little nuggets spread throughout the book. Random things I learned from Everybody Loves Our Town...

- Duff McKagan from Guns N Roses left Seattle for LA because he wanted to be in a heavy metal band, but he was also scared because heroin had engulfed the music scene and he didn't want to become a junkie.

- There's the unfortunate tale of Candlebox, who drew the brunt of the backlash against "corporatized grunge rock."

- The Screaming Trees got jumped outside a bar in Asbury Park, NJ the night before their first-ever spot on Letterman. Even with make-up, their lead singer has visible and obvious black eye.

Everybody Loves Our Town is a perfect companion piece to the HYPE! documentary.