I Used to be Sneezy, Now I'm Doc

The weekend came and went without a ray of sunlight in the big city. It rained most of Friday and all of Saturday before taperng off to a grey, gloomy, and chilly Sunday. I was bogged down writing as much as I can before I return to Las Vegas in one week for a two week trip that will include a week of work at the Bellagio and a week of playing poker and attending some kick ass concerts for Vegoose. I sacrificed sleep to write and worked on several freelance articles (two player profiles and a revew of a popular online poker site), my current blog project (content proposal), and my untitled Las Vegas book. I also edited a couple of Truckin' stories for the upcoming issue. I wrote a small update about Vegoose along with something about UNLV football.

I woke up super early today to write a post for my poker blog called The Tao of Risk. I was pumped when I was able to drop in "Opportunistic Flexibility in Adapting Strategies and Tactics to Situations."

I must say that I am pleased with my writing output and the qaulity of my writing over the past two or so weeks. Obviosuly, I wish I had more time to write more, but the words seem to be flowing freely and I'm usually my own harshest critic. Right now I'm in the middle of a nice binge and I want to close out the week with some of my best stuff to date.

This weekend marked an ugly day for my fantasy leagues. Uncle Jodd's Band suffered it's second consecutive losing week in the Lamont Jordan Fantasy Football League. Sure the week is not techincally over, but it appears that we'll slip to 3-2 after a stellar 3-0 start. Ouch. My team Split Open & Melt managed to win team of the week in the Pauly's Pub College Football Pool. So that was cool.

I played a little poker this weekend and dropped $120 one night. I also played in a tournament that got cancelled mid-way when Party Poker had server troubles. I got my money back and a few bucks on top of that. I was hoping to improve upon a decent finish in a similar tournament I played in on Thursday when I finished in 71st out of 1615 and made the money. If I can get all my writing done early today, I'd like to sneak on and play some more. 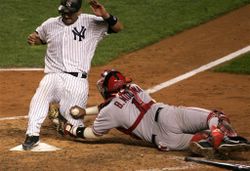 On Sunday, the NY Jets surprised a lot of folks with a 14-12 victory over Tampa Bay and the best defense in the NFL. Vinny Testerverde is like 50 years old and he managed to get the job done as the Jets picked up a big win. Curtis Martin scored two TDs depsite only have 59 yards rushing.

On Sunday night, the Yankees even the series with the LA Angels at 2-2 with a huge 3-2 come from behind win at Yankee Stadium. The game on Saturday was rained out and after last night's game both teams flew across the country to get ready for tonight's decisive Game 5. During the first five innings, we were treated to an old fashioned pitchers duel. Shawn Chacon and John Lackey kept both teams in check until the Angels hit back-to-back RBI doubles against Chacon in the top of the 6th.

The Yankees rallied back for a run in the bottom of the inning on an RBI single from Gary Sheffield, but waited until the bottom of the seventh that the Yankees tied the game and eventually took the lead on a bang-bang play at home plate when Jorge Posada sneaked underneath the tag from Benji Molina. Mo Rivera came out and picthed the 8th and 9th innings to seal the victory and force a Game 5 in California. It all comes down to Mike Mussina against Bartolo Colon tonight.

The game also marked the possibilty of Yankees fans seeing Benrie Williams in pinstripes for the last time.