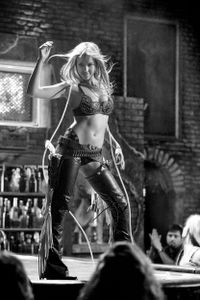 I'm OK. Really. Thanks for everyone's support yesterday. I'm much much better today. I was even in a good mood when I wrote Tuesday's post called "Monday Tilt." Usually if I'm writing about something, then that's the last process of me getting over something. I'm very good at letting things go.

I apologize if I brought anyone down. I know Iggy said he was a little bummed out after reading my post and Joanne said she was very sad too. Sorry about that folks. I even played a MTT on Noble Poker last night and there was a reader at my table. He even asked me if I was still on tilt!

Anyway, since I got back home to New York City, I've been watching a ton of movies in an effort to spend time away from the computer. I caught a sneak preview of Sin City with Briana when it first came out several months ago and I rented it again. Damn, I'd give up poker completely if Jessica Alba tied me up for six straight hours and tickled me with her flowing hair. Her scenes have given me months and months of future spank material.

Speaking of masturbation, did I ever tell you about one of my former roommates who was a complulsive masturbator? OK, I know... we're all compulsive wankers. But some of us actually show a little discretion in how and when we pleasure ourselves. Not this guy. We'll call him Mr. J. I caught the infamous Mr. J dozens of times a month and plenty of my friends in college did too. It became a running joke that your day wasn't complete until you caught Mr. J in the act, with his schlong in one hand, a magazine in the other, and his pants around his ankles. It never really bothered me until I discovered that he was jerking off to International Male magazines. That's when it got a little uncomfortable.

I know what you are thinking... how the hell is Pauly going to segue this into some sort of poker lesson?

Online poker is just like mastubartion. We are getting satisfaction and instant gratification by ourselves. Playing online poker is an isolationist activity and to most people, it's not as cool of a hobby as hang gliding or running with the bulls in Pamplona. In the end, we're all just playing a video game while bitching out donkeys who suck out two outers on the river against us.

"Way to go, Mr. Online Poker Star, I haven't seen anyone wank their pud like that since Johnny Chan won back to back WSOP titles in the late 1980s." 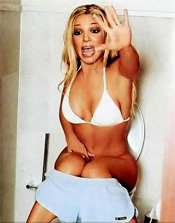 The same could be said about online poker. For many people, they are just too timid to walk into a poker room or sit at a table to play cards. When you are playing live poker, you are really opening yourself up. Some players are better at hiding themselves than others. While some folks spill out their entire lives onto a poker table.

For me personally, if playing online poker was as exciting as pleasuring myself to thoughts of Jessica Alba's supple lips and firm breasts... then shit, I'd be playing online all the time. But there are moments when online poker fills the void for me and gives me an outlet to let loose all my psychologically aberrant behavior. But nothing beats playing live poker and nothing is better than having sex with someone else.

I went from playing in multiple Las Vegas casinos everyday to not having a legit casino no closer than a two plus hour drive. Online poker has been my outlet to get off until my next assignment or until my next trip to a casino. I have also not been inside of a woman in almost four months. I expect that streak is going to end in about ten days when I head off to Europe. I'm meeting a former lover and everyone's favorite malcontent elevator button heiress while I'm there for a romp in the sack. And if for some odd reason sparks do not fly, I can always see a "relaxation therapist" in Amsterdam's historic Red Light District. In the past four months, I've been playing with myself a lot. I was lucky to have phone sex a few times (thank God for the Tao of Pauly female groupies) while I was in Las Vegas and spent too much time and money at strip clubs. I'm anticipating the same rush and excitement that some people get when they go to a casino for the first time.

If you seriously have a problem with either, please go seek help. They have support groups for both. If you think you have it under control, then so be it. I would suggest taking a break every once in a while and interact with real people. Playing with yourself or playing online poker is fun in small doses. Moderation is always the key to success.