"By letting it go it all gets done. The world is won by those who let it go. But when you try and try. The world is beyond the winning." - Lao Tzu

I was on tilt in two different, yet intertwined aspects of my life. I tilted a tad at the poker tables and tilted the remainder of my day away at the poker table of life. I woke up toady pissed off that I did not exhibit enough self control to avoid both. I also wasted most of my afternoon and evening away while I was on tilt.

Allow me to explain. 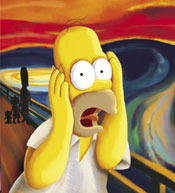 Way before 11am on Monday, I fired up Party Poker. I dropped 2/3 of a buy in at one table. That's nothing out of the ordinary. Those things happen. It's just that I called bets on the river (and in one case I called three bets cold) just to see a hand that was going to beat me. Both instances I knew the other players were on flush draws and they promptly caught them. Nothing is worse than seeing that flush card hit on the river and the clown who had been check-calling you all the way down, all of a sudden bets out. It's like he's giving you a warning, "I'm about to kick you in the junk!"

I lost two monster pots in that fashion and I was off my game. I had been aggressively defending my blinds since I moved to Las Vegas because according to Poker Tracker, that's the biggest weakness in my game... blinds play. I've been defending with any two cards, but haven't been hitting my flops. My goal had been something that I read about in an article in Card Player from Matt Matros regarding playing Limit Hold'em. If they are on a true steal with junk or even with a marginal hand, I'm not that far behind them. When they actually have a good hand in late position and raise the blinds, I see this as an opportunity to try to get other players on tilt. I've been foolishly calling (or sometimes re-raising) with 10-3o in the Big Blind and hoping to flop trips to crack their high pocket pair. However, I got a little too out of control trying to outplay better hands out of position that I lost a few pots, when I should have probably just conceded my blinds.

I didn't play optimal poker but I luckily escaped with only losing a few bucks. That doesn't bother me too much, I'm prone to going on streaks of minor tiltdom from time to time.

I'm probably more upset that I went on tilt in real life after a phone conversation with a family member. It was less of a real conversation and was more like I listened while they bitched and yelled at me. Without divulging too much personal information, I will say this: My brother is the only one in my family that I get along with. The remainder of my family (on both sides) are Martians and that's being kind. I dunno how the hell I share the same bloodline, genes, and DNA with certain members of my family when we're all such vastly incompatible. And it's not simple things like I like chocolate and they like strawberry. It's more complex and serious issues like religion, politics, philosophy, personal freedom and lifestyle choices, and economic and social differences. And it seems that on every issue, I'm the enemy and we stand on opposite side of the spectrum. I can understand and accept that they are different. However, that feeling is not mutual. And therein lies the struggle.

Plus I don't want to get married and have kids (at the least both are not in my 10 year plan), so that drives certain family members even more crazy. I've often screamed out in loud volumes, "Stop using me to feel better about yourself!"

I'm not a wandering beatnik with aimless goals anymore. I know why I am here and what I'm trying to achieve. In my 20s, my family constantly nagged me about the length of my hair or my career choices. Now that I'm in my 30s, I'm losing all my hair and they want me to do "something normal" like get married and churn out grandkids and great-grandkids. If they like kids so much, why don't they just adopt and let me write and travel?

Of course this has been the case for thirty years, so why should it bother me? Derek gets plenty of shit too, even more than me sometimes because he's the only one who will defend me. Yesterday I let my family problems get to me and I went on mega tilt. I was angry, pissed off, humiliated, deeply hurt, embarrassed, and bombarded by feelings of melancholy after that bitter conversation. I couldn't even watch Degrassi that I was so high strung. Derek tried to get me in a better mood. We watched "Sideways" and that helped a little.

I woke up today in much better spirits. I had a long talk with Haley last night and she assured me that for the first time in a very long time, I'm living a good and productive life and how I should not allow negative energy and let family squabbles distract me from accomplishing my goals, both as a writer and as a poker player. She reminded me something I told her when we first met in early 2002. I was working on Wall Street at the time and I said, "What I really want to achieve out of life is not to make money. I'm gonna write one of the first great American novels of the 21st century."

She's a good egg and believes in me on days when I don't believe in myself. By the way I remember that cold Winter day three and a half years ago like it was yesterday. I even recalled what she was wearing too. I told her and of course, my near photographic memory freaked her out.

After that pep talk, I fired up Noble Poker and played a MTT with Drizz and Joanne. 79 players total were in. And Joanne made another fuckin' final table! I was crippled early and came from behind. I was last out of 50 players and at one point, without seeing a single flop, I moved into 4th place by picking up blinds and moving all in late position against a pot full of limpers. I eventually came in 19th place after I lost a big pot when I made a great read and called an all in. I had A-9s and the other person showed A-6. The river was a 6 and I was shortstacked. With next to no chips, I went for a steal on the next hand and was eliminated. Joanne made another final table. She continued her amazing run.

I was on tilt for most of yesterday, but now I got my head on straight.

Tonight I'll be able to finally watch the WSOP on ESPN with my brother. Flipchip has a great post about WSOP on ESPN Tonight. There are two episodes for your veiwing pleasure tonight. If you want you can go back and read my live blogging updates of those tables, here they are:

Re-reading those entries are fun. It's like being on another planet. I thought about editing them and fixing up the spelling and grammar, but then it would lose it's charm of "being in the moment." 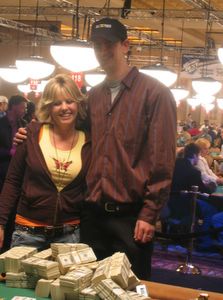