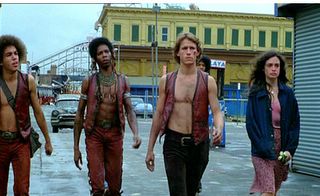 CBGB's gets a one year extension after they were supposed to close their doors earlier this year. This gives me one more year to blow off that place. I might go back just to get drunk and piss on the floor of the men's room. A few years ago I walked by with my friend Molly. We were headed to see Charlie Hunter play at Bowery Ballroom. A posuer-punk-hipster called me a yuppie as I walked by. He was looking for a fight. I blew him off. A real punk would have walked right up to be and popped me with an eye-jimmy without even muttering a single word.

Are journalists underpaid? It's a question posed in a recent Slate article.

Vote for the Movie Blog Awards! I'm going to because I'm a loser with nothing better to do that vote in meaningless polls while I play online poker. In my attempt to kiss Ron Howard's ass... I picked him for Best Director.

"The Warriors" fight on talks about how the movie is still a cult classic 26 years later.

Jack Black talks about a lost weekend of liquor and ecstasy during the shooting of King Kong. I heard Naomi Watts is a big pothead too. I'd like to toke up and grope her for a few hours.

In animal fucking news... old man pleads not guilt for sexual relations with a calf. Daddy was quoted as saying, "What a fucking pussy!" However, one man was found guilty of having sex with a horse in Washington state.

I spotted a few blogworthy things on The Smoking Gun...