I was amazed that I had such a high level of energy when I woke up on Sunday. The knee throbbed a little bit and my feet hurt a tad, but aside from a few body aches and a minor headache, I was 100% considering what everyone else had to endure. Since Bonnaroo started, I had three hot showers and avoided shitting in a sweltering port-o-potty. 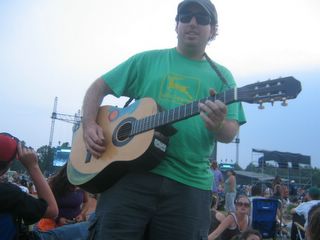 The Joker's gamble to stay off-campus paid off. We paced ourselves over the first three days and had lot of energy leftover for the final day. Just as more than half the crowd was running on vapors, we were at full speed. We witnessed three amazing days of music which included three dazzling gems at the sets of My Morning Jacket, Radiohead, and the Super Jam. We had one more day to go and anything we saw was going to be a bonus.

I opted for just one Texas Toaster sandwich at Sonic before we drove in. I noticed that a steady stream of cars began leaving the campgrounds. Those were the folks who had to go back to work on Monday or the slew of indie kids that showed up to Bonnaroo only to see Radiohead.

During the walk in, I could sense that people were frustrated after three tough days of camping. The intense heat, speedy drugs, and lack of sleep had made them go crazy. One couple screamed at each other in a domestic dispute a few blocks off of Shakedown Street. She was in tears and he had that look on his face like, "I wanna leave your ass here and go back to Ohio."

I wanted to see Michael Doughty from Soul Coughing but he was slated at 12:15 on Sunday. I went to bed around 7am and was still wasted from the night before. Change100 had to drive us home on Saturday night/Sunday morning as the sun started to come out. Due to the awful time slot, we missed out on Doughty. Col. Bruce Hampton and the Code Talkers played the main stage around the same time as Soulive and we missed both. I wanted to check out Soulive, a funky-jazz trio from New York City, but we didn't get in until after they started. I wasn't too upset. I had seen them twenty or thirty times before.

We could hear Bela Fleck's distinct banjo as we walked in. We headed over to see The Streets play. They are a weird rap band from England with zany lyrics. Mike Skinner joked with the crowd, "You guys have more money than me. But we're better at football. Oh, I'm sorry... soccer!"

We headed over to Matisyahu and skipped Son Volt. Jay Farrar used to play in Uncle Tupelo with Jeff Tweedy. Farrar stayed on the alternative-country path with Son Volt, while Tweedy went on to form the effervescent Wilco. I wanted to see them, but I had never seen Matisyahu perform live before. He was on the short list of acts that I was excited to see at this year's Bonnaroo. The Orthodox Jewish reggae-rapper was a hard-core Phishead who followed them for a while. He started making his own music with a uniting message of peace and love for everyone. He also encouraged the crowd to go make babies. Lots of them.

We had a decent spot for Matisyahu and we first began to see how exhausted the crowd was. People were passed out. Some were resting and others were sleeping. We had one passed out guy on the grass near us and another frat boy who looked like he had snorted an entire gram of molly before breakfast. He took the Oprah head and danced around for twenty minutes with it.

During one of the songs where Matisyahu raps, the Joker turned to me and tried to imitate Matisyahu.

The Joker was wasted and it wasn't even 5:30. We were on a mission. Sunday at Bonnaroo was "smoke and snort your entire stash" day.

A couple of minutes later he turned to me and said, "Pauly man, I'm pretty wasted."

"What else is new? I've known that for two songs," I answered.

After Matisyahu's set, we headed over to see Sonic Youth They were the original indie band with Kim Gordon on bass and Thurston Moore on guitar. The formed in NYC in the early 1980s and most of the members were in various punk bands in one form or another. They were part of the Pigfucker music scene with other bands like the Butthole Surfers and Pussy Galore. I first listened to Sonic Youth when I was in high school and I snuck into one of their shows in the East Village. Back then, I never thought I'd see them at a Bonnaroo type festival when I was in my early 30s. Thousands of bands have come and gone since then, yet Sonic Youth survived due to the talents of Moore and Gordon.

We caught the end of moe. at the main stage and skipped "topless" Bonnie Raitt, drunken-country balladeer Steve Earle, and the rap-beats of Atmosphere. The end of moe.'s set was solid and we played poker as we waited for Phil Lesh and Friends to close Bonnaroo out with two sets.

During the break, a group of wookettes sat down in front of us. They had a guitar that the Joker asked to play. It was left-handed but he picked it up anyway.

"Where do all these wookies live?" asked Change100.

"Boulder, Colorado," the Joker and I said in unison.

BTreotch organized the Bonnaroo Poker Open. The Joker won the tournament and left to spend his poker winnings. He got a cheeseburger and a pair of funky sunglasses. They were more for show than to protect your eyes from the sun. They were hip enough that everyone on Shakedown Street asked the Joker if he wanted any molly.

Phil Lesh is my favorite post-Dead project. I'm not a fan of Bob Weir and never went nutty over Ratdog. I also thought that The Dead (minus Jerry) was flat. Now Phil Lesh and Friends kicked ass. His rendition and choices of Dead songs to play were similar to my personal tastes. Plus he always had excellent musicians to compliment his bass playing. You can never go wrong with Warren Haynes in your band. Sadly, he wasn't playing on this tour, but jazz guitarist John Scofield was. His inclusion was a nice treat.

Lesh's lineup included Joan Osbourne on vocals, John Molo on drums, Larry Campbell (from Bob Dylan's band) and John Scofield on guitar, and Rob Baracco on keys. I thought their first set started out hot. I dug Cumberland Blues and the crowd was into that high energy tune. Scarlet Begonias is my favorite Dead tune and that's always nice to hear. During New Speedway Boogie it started to rain. By the end of the song, it came down hard and we made a run for the back of the main stage area. There were shade tents where about fifty or so other people were seeking shelter. We put the chairs down and watched the majority of the second set there as the rain fell heavily at times.

We were all pretty trashed by that point and we finally found Professional Keno Player Neil Fontenot. He wanted to see how fast the Joker could run from the back of the field to the front stage and back. The line was set for 6 minutes and thirty seconds. I had the over. The Joker took off in the darkness and disappeared into the crowd. He returned 1:58 later. He cracked two minutes and I lost my bet with Change100. The Joker ran a 10K a few weeks ago in the high elevation of Boulder... wearing a Santa's costume. I should have known he could have cracked the under easily.

After the Phil Lesh set, we stopped by Molly's campsite to say good-bye. We hit Shakedown one last time and there were all these locals selling Bonnaroo t-shirts for $5. I got a cheeseburger for the road and we looked for my nemesis Fred Savage. We never found him.

Sunday was the bonus day at Bonnaroo. We caught a bit of moe., The Streets, and Sonic Youth and saw all of Matisyahu and Phil Lesh's set. Combined with all the other delicious music we tasted the previous three days, I left Bonnaroo completely satisfied and felt as though I got my money's worth.

I left Tennessee with just a few bug bites and $200 under budget! No one in our group got into trouble and no one got so wasted that we had to take care of them. We all got along and had a blast. 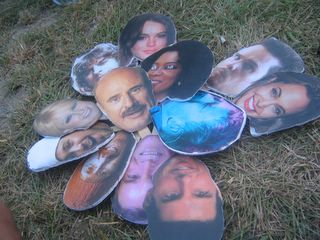 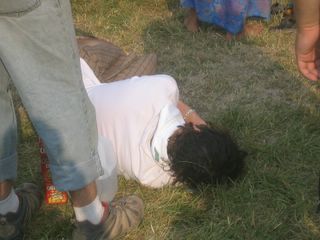 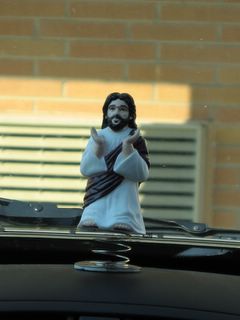 Jesus provided us with safe passage
during Bonnaroo 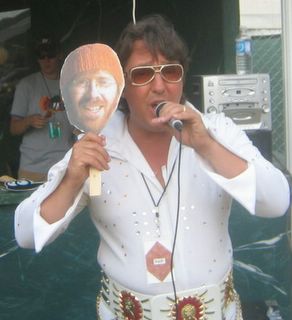 Elivs with Trey... "See ya at Vegoose!"
With the success of Vegoose in 2005, organizers are going to do it again, expanding the event from two to four days. I'm not going to miss out on that action. Vegoose 2006 is only four months away!

The Joker sent me a link that has a ton of 2006 Bonnaroo downloads.