Over the past week, I managed to catch bits and pieces of the Katie Holmes flick First Daughter where she plays the daughter of the President (Michael Keaton). This is the last flick Katie Boobs did before she succumbed to the dark side of Scientology. It's been all downhill since then. OK, she might have done one or two flicks like Thank You for Smoking or Batman Begins... but I already saw those and had not seen First Daughter. Oh, and it's bad... all around. The acting is atrocious. The script is extremely flawed. And the pacing is as rough as a cheese grater. But you get to see her in a bikini for a few minutes of screentime and that's worth the price of admission. Her best film roles are smaller ones such as her work in The Ice Storm and in The Wonder Boys.

I think I'm going to have to break up with Katie officially. Besides, most relationships sour after seven years anyway.

I'm sorry Cupkates, but I have to say good-bye. It's not you. It's me. Thanks for seven years of masturbatory pleasure. 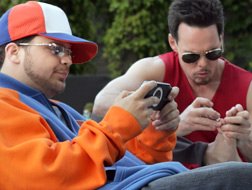 The season premiere of Entourage went down last night and I was satisfied. James Woods stole the show. Now that The Sopranos and The OC sucked camel testicles this past season... Entourage is my new favorite TV show. Johnny Drama and Turtle are the greatest comedic duo since Kip and Henry in Bossom Budies.

I'm 4 for 4 in my World Cup picks. Americans are more infatuated with Bradjelina's baby. On Sunday the Dutch, Mexicans, and Portuguese prevailed as I caught a few minutes of the Mexico-Iran match. On Monday I have the Yanks over the Czech Republic. I also have Australia and Italy to win. I have zero knowledge of soccer and especially international teams and players. I pick countries based on whether or not they have hotter women or not.

The NBA finals and NHL Stanley Cup finals are going on and I couldn't care less. The reason the Knicks and the Rangers are both not still playing is because of their owner James Dolan is a megalomanic who's unfit to ran a professional sports team, let alone two of the most storied franchises in all of sports history. He's ruined both teams and should have been strung up by his testicles years ago. All I know is that ever since Jeff Van Gundy left the Knicks, they have been unwatchable and the laughing stock of the league. I'm ashamed to be a Knicks fan and the Rangers are no better.

On Saturday, I crammed in the last bit of writing that I had on my agenda. I estimated that I put in 100 writing hours since Memorial Day which includes almost 20K words for the Born to Gamble series and 12 freelance articles along with keeping up my other sites. I'm peaking just at the right time. I worked on the June issue of Truckin' including my story about some hijinks in Hollyweird last month. I also answered all my backlogged email this weekend. I had over 260 pieces on Friday morning. All of my accounts have less than three items in each as of this morning. It's never been this clean all year.

I woke up early on Sunday for laundry and to write for a couple of hours. On my way back from laundry, I almost ran into a guy that Derek and I nicknamed the "serial killer." I turned a fast corner and he bumped into me. I hip-checked him and he slammed into the hallway wall. I quickly apologized as he muttered an apology back and scampered off. Now I'm worried that I'm on the serial killer's shit list, and he's going to wait until the planets are in alignment before he wacks me by injecting Windex into my bloodstream and sodomizes my ears and belly button.

There's one potential serial killer in every apartment building in every major city or one serial killer in every suburban neighborhood. He's the middle-aged guy with messy thinning hair and glasses as thick as astrays, who looks disheveled all the time wandering around with an odd look in his eye like he just drowned a sack full of kittens. He wears jeans that are one size too small and walks around with Reeboks circa 1987. One day he's gonna snap and they'll be yellow police tape blocking off his apartment as they sift through boxes of bleach and bottles of horse semen.

It took me less than an hour to pack for a week on the road. I'm traveling light which you can do in the summer, especially going to the South. I'm spending three days in Clarksville with Spaceman and his lovely wife Mrs. Spaceman. Oh, and eyeyrone's favorite Hollyweird blonde, Change100, is flying in on Tuesday to hang out as well before we hit up Bonnaroo when Molly and The Joker get in on Thursday. That's when we embark on a four day bender of musical madness and non-stop partying.

My too biggest clothing items are a sweatshirt and a waterproofed windbreaker to take with me just in case the weather gets bad at the end of the week at Bonnaroo. In the past, there were instances where the weather was horrible and lots of rain and mud.

I pack according the standard formula that I have. Like for underwear, it's "days away" plus 1. So one week that makes 8 pairs of boxer shorts. I'll take the same amount of socks. I can get away with four t-shirts and a couple of golf/dress shirts. No jeans but two pairs of light pants and two pairs of shorts. I usually travel and fly in the nicest clothes that I'm bringing.

That can all fit in a carry-on bag along with my toiletries kit and a book to read. I'm taking Lubricated by Arthur Nersesian. I never finished the book and my goal is to have it done before I move to Las Vegas in 10 days.

I'm also adhering to the Senor rule that if I need something when I'm on the road... I can always buy it. I have to make sure I have enough cash with me and my Bonnaroo ticket! I can't let either out of my sight.

I'm bringing my iPod with me because I'm not flying on JetBlue and I'll need something to keep me entertained. Do you think I actually talk to the peasants that fly Coach on domestic flights to the South?

I'm also bringing my laptop. I know that I'll be at a music festival for four days, but I might want to jot down some thoughts on future reviews that I write or upload photos. I have one business deal that's going down this week and I need to be close to email access. If this deal works out, then I'll have a sponsor for the WSOP for the Tao of Poker, which means I won't have to pay my own way in Las Vegas for two months.

So that's one carry-on with a week of clothes and one laptop bag with a laptop, digital camera, iPod, and necessary chargers and adapters and plugs. In addition to a few CDs to listen to in the rental car.

I'll be posting pictures and updates of my trip to Tennessee and Bonnaroo right here. Stay tuned.