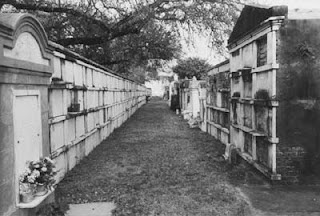 Some people find the truth in photographs. It's a person's soul captured at one moment in time and space. The picture cannot lie like a human can. A couple of months ago, I sorted through an old box and I came across an envelope with several photos of a trip that I took to New Orleans with an ex-girlfriend. That was pre-9.11 and over five years pre-Katrina.

The one thing that struck me the hardest was her expression in most of the photos. She looked sad, confused, somber, and at times morose. Out of forty or fifty photos, there were five or six that stuck out. For the most part, she was smiling in almost all of them. But it was the few that she didn't which spoke volumes to me because I snapped those photos when she wasn't looking.

Our relationship at the time was undefined. Yes, we were sleeping together at the time but neither of us would dare to say we were boyfriend and girlfriend. If you were to saying "seeing each other" that would be a stretch. We both liked each other. A lot. But she was in flux and just got out of a hectic relationship and I was in one of those stages were I had several meaningless relationships in a row. It didn't bother me that I was the rebound guy but I think it bothered her to think that she was the fuck du jour.

Alas, we were on the road visiting a few places on a road trip and we stopped off in New Orleans. Senor's brother lived there at the time and we crashed at his flat near Tulane. We spent the days wandering around the city and exploring jazz clubs and cemeteries. She had never been before, while I was a veteran. I had been too many times for Jazz Fest and Mardi Gras. For a city that I never spent more than a few days in, I knew the Crescent City like the back of my hand.

I showed her all the touristy spots and at night we'd hang out near Uptown or at various bars near Tulane. There were moments when I knew she was in another space. We'd be walking around the Flower District and although she was walking only a few inches right next to me, she carried herself with a disturbing distant and uncommunicative vibe. At the time I simply thought she was overwhelmed by the magic of New Orleans. She was really a small town girl, or first timers, the allure of New Orleans could be overbearing. I knew it was for me when I first set foot in that town when I was a drunken 18 year-old frat boy, and I was coming from New York City

In 2007, I examined those photos of our trip to New Orleans and I finally understood the dynamic of our relationship with much more clarity. I'm a little older and wiser. I've had more experiences with women and endured mature relationships. At the time she was horribly depressed and I was not helping things with my erratic and nomadic behavior. If anything, I might have made things worse dragging her on the road with me. At the time, I had no clue. It was the late 1990s and I wandered around in a murky haze of inebriation.

Her long gaps of silence were not filled with moments of pensive thought as I originally thought. She was spiraling down into a dark place. Even if I knew that was happening at the time, I really wouldn't know what to do.

One photo was snapped right near Jackson Square. When I first saw the photo, I quickly dismissed it. That was back in the day of disposable cameras and out of 36 pictures, it was not uncommon to get a dozen or so crappy photos. Usually I tossed those shitty ones out. For some reason I kept all of them and instead of all the good ones, I focused on all the sad ones. The camera didn't lie.

I suspected that she was conflicted. She loved being away from home and seeing new places for the first time, especially cities that she had never been to before. But I also suspected that she missed the comforts of her own home. Her own bed. Her cats. Her own chair that she loved to sit, sip coffee, and chain smoke in.

The most likely scenario was that she wished she was in New Orleans with someone else. Another guy. Another crush. Anyone but me. She had grown tired of my antics and all of the partying. what at first seemed cute and different had grown tiresome and trite. I was a hardcore druggie and she probably resented that fact.

Maybe she was sad that she knew she had to leave and go back to her home and the same old boring routines. Maybe I'll never know why she was sad, but when I glanced at those photos, I could not feel her sadness sitting heavy on my shoulders.

I wanted to call her up and see how she was doing. I wanted to let her know that I was sorry that she was depressed and to apologize if I made things worse for her. Alas, we had not talked in a very long time and I was reluctant to open up old wounds. I tired to think about happier times that we shared and the fun times we had on the open road, driving state to state.
by Pauly at 7/09/2007 01:39:00 AM