It took a dozen trips outside in the 100+ degree temperatures to move out of the apartment in the Del Bocca Vista. I spread out a dozen combined trips to the car and to the dumpster over a two hour span. Once everything was packed into Nicky's Mazda underneath the carport and we cleaned up the entire apartment. 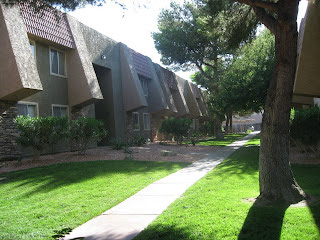 We waited for the rental dude to come over and inspect the joint. He showed up ten minutes late before he signed off on the place as he joked, "Good to see no holes in the walls."

I forgot to tell him about the broken mirror which happened ten minutes after we moved in two months earlier. He'll find out soon enough. Nicky never drove faster out of the complex. The dozens of speed bumps were killing the suspension on her car, yet she quickly sped over them.

The move out process was fairly simple compared to last summer. I helped Grubby move out of his place in Henderson and loaded up 200 boxes of books, old VCR tapes, and clothes onto a storage truck at 4am. After a fire sale of items via Craigslist, he gave away the remaining items in the apartment to his neighbors. The Mexican family living down stairs benefited the most as they added a new couch and other living room furnishing courtesy of Grubby and the Station Casinos gift department. They also got my $500 mattress for... free.

Around that time, I noticed I was out of shape. After a few trips up and down a flight of stairs, I was winded. After a couple of hours o moving Grubby's stuff, my body ached all over. A few weeks after helping Grubby, I had lunch with Senor and his family in the Village. Senor's wife told me that I was fat. She was kinda joking but not really. That's when I began a crazy workout routine as I shed 20 pounds inside a few weeks. I will be doing the same once I get back to NYC in early August. Meanwhile, I'm going to start to slowly ween myself off of drinking booze everyday while I go batshit about eating at some of my favorite LA eateries.

The drive from Las Vegas to LA should take four hours without any traffic. Nicky picked a window where she hoped that the congested LA freeways would not be too busy and cluttered by metal coffins filled by maniac drivers. The plan was to roll into town around 9pm skipping the rush hour standstill. We made good time through the desert and bat country courtesy of my speeding skills. At one point I was going 110 for a few minutes before I realized what was up. And there was a solid twenty minute stretch where I sped through Death Valley at 90mph.

We stopped off in Baker, CA (aka the midway point between Vegas & LA) for In & Out Burger. We avoided eating fast food as much as possible and I didn't ingest In & Out as much as I did in the previous summers. Two years ago, I lived next to a Wendy's and across from the In & Out on Tropicana. That's when I burnt out on both of those franchises. However, the double-double I devoured in Baker hit the spot. Nicky took over driving after Baker. She guided us into the LA suburbs and eventually into the side streets of the slums of Beverly Hills.

After two months, we finally got to see Showcase. He had booked a commercial over the summer and his dog walking business was flourishing. He me cast member of The OC in the dog park. Actually their dogs were playing with each other and they stood along the side and chatted... about dogs.

During my first 24 hours in Hollyweird, I sat on Nicky's couch ripping bingers and catching up TiVo including the last episodes of Studio 60. That show is toast and Sorkin couldn't pull off another West Wing. He'll be back. Maybe he should do more mushrooms to come up with a better idea for an hour long drama? I don't watch too much TV, but I really enjoyed Studio 60. Since I never watched one episode of the West Wing, I had no clue about Sorkin's writing chops.

On Friday morning, I woke up early and wrote before I decided to pester Nicky to drive me to O'Groats for their French Toast. I had been craving that meal for over two months. And their bacon is some of the best in LA even thought it's microwaved bacon. During breakfast, we were caught in the middle of a couple of tables with industry types. They rarely took a moment to catch their breath and barely touched their food as they talked back and forth and used Hollyweird buzzwords and spewed bullshit for the entire time it took me to eat my French Toast and bacon. We slipped out of O'Groats quickly and drove up to Zuma Beach in Malibu. Nicky had been craving sun all summer during our time in Las Vegas. We had a pool at our apartment at Del Bocca Vista but did not use it once.

We found a spot on the north end of Zuma and set up camp. I lugged out two of the chairs that I bought for the Las Vegas apartment. I read Under the Banner of Heaven. I started reading Jon Krakauer's book about the Mormon religion a couple of years ago and never finished. It was in my four-foot high pile of "unfinished books" that I have scattered about somewhere in NYC.

I read for a couple of hours and relaxed in the sun as I slowly left thoughts about Las Vegas behind me. Not too many people understand the decompression process that you experience after living in Las Vegas for two months. The amount of time varies and is never the same. In the last two years, I escaped to Colorado to help me slowly adjust to a non-gambling culture. This year, I hoped that NYC and LA can convince me to stop walking around with $3,000 in my pocket and to stop trying to figure out if a single female sitting by herself at a bar was a hooker.