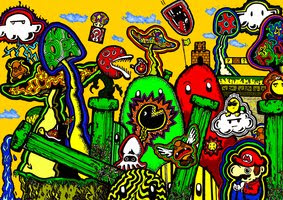 Catch-22. No win situations. Both can suck my left nut.

If I try to fix shit around the apartment (and shit is always broken) then the landlord gets pissed. If I call him up and tell him something is fucked up, then he's pissed.

My strategy... I try to solve the problem myself and if I can't do it, then I call in the landlord. But plumbing is a tricky situation. I tried to study plumbing via the intertubes. You'd be amazed at what you can find jumping down the YouTube rabbit hole. I needed to develop post-collapse skills. A friend took up woodwork and carpentry a few years ago, which sounded practical and very zen-like. I opted for plumbing. When I was a kid, my uncle used to own a big plumbing company in Northern Jersey. It's sort of in my blood, right? Plus, I once worked as a plumber's assistant in Seattle. It was one of like five part-time jobs I held. The guy I worked for was from South Boston (he had a crazy accent, almost cartoon-like) and he was a huge cokehead. We used to smoke weed in his truck out of different elbows (pipe fittings). Not the best mentor to have, unless you were a total druggie like Mario and Luigi.

I anticipated a stark need for skilled workers in a post-collapse or post-Apocalypse scenario. I doubt I can fall back on the "arts" in those extreme situations. Hey, I'm not that kind of painter, although I once painted apartments with a crew of illegals for like three days before I found a better paying job. So plumbing seemed like something that could be valuable in the long term, but in the short term, it could help out in a pinch.

Our dingbat building is 60+ years old and in cruddy shape. The miserly owner cut corners, which he can do since we live on the wrong side of the Beverly Hills demarcation line. He really puts the slum in slumlord. I mean I shouldn't complain because he could be a faceless ruthless corporation like the one in San Francisco that ran Halli out of our Victorian in LoPac. Or he could a supreme SLUM lord like the cheap bastard who owns the building next door which is a total rathole and the only people who would live there are old Persian jews waiting to die, and a couple of super Orthodox families with five kids (including a wailing newborn that cries constantly) squeezed into a two-bedroom apartment.

In the last few months, I fixed the sink and a leaky shower head. These are not complicated things but not something that should require outside intervention, which is why I went ahead and did them against the wishes of the landlord. Besides, I liked doing it and needed the practice to improve upon my amateur skills. Unfortunately, I failed to fix the toilet. That fucker dates back to when JFK was still alive. I had to bring in help that time and the landlord was a pain in the ass about it.

Our sink clogged up yesterday morning. The new neighbor upstairs finally figured out you can't overload the trash disposal because that shit will back up in both our apartments. I figured wasting $20-30 on Drain-O would be useless because the landlord would never reimburse me for it. I don't have the snazzy equipment to snake a drain so I told Nicky to call up the landlord. If I call him, then he gets nervous because he fucking hates me. Bullies don't like people who stand up to them. So yeah, I really irk the shit out of my landlord because he know I call him on his bullshit. We decided Nicky would call so he'd be more likely to fix it sooner. If I called, then he would quickly rush me off the phone and then blow it off for a few days.

Of course, the landlord made us wait a full day before a plumber showed up. I didn't know how to react. He should have come over last night, but at least he didn't wait until Monday.

Plus, plumber showed up in the first hour of the three-hour time frame he gave us. Usually you always take a bad beat in those situations. If they say 11-2, then they show up five minutes to 2. Many moons ago (pre-9/11), I offered to babysit a cable installation for a friend who moved into a basement apartment in Carroll Gardens. The cable guy give me a six-hour window (11-5) and then he was a no show. The fucker lied and said he rang the bell when I was sitting on the stoop and reading an Arthur Nersian novel for 95% of those six hours (the other 5% was taking a leak, jerking off, or smoking weed... but all those activities were within earshot).

Anyway, the plumber showed up early this morning within the first hour. No nonsense. In and out. I knew he wasn't getting paid much because our landlord is a cheap mofo (I was convinced he used a plumbing service based in Tijuana just to save a few bucks... during another incident when I quizzed about a delay, he mentioned his plumber was stuck in Mexico).

I did a double take because the plumber looked like Chris Rock. Could have been his brother Luther Rock? I left Chris Rock's brother alone with the kitchen sink and watched Ancient Aliens. For ten minutes his sewer snake machine shook the entire apartment. The suit with the BMW next door was hungover and trying to sleep in, but he got woken up by the commotion.

A couple years ago we had a similar problem with the sink when new tenants moved in and found out the hardway about the trash disposal and cheap plumbing. An old Mexican plumber snaked the drain  that time. Deep clog. "Ochocino," he said over and over. This was before Ochocino changed his name, so I didn't laugh in his face. He was telling me the depth of how far the sewer snake went.... 85 feet. His machine was only set up to go 100 feet. Ochocinco.

When he was done, I thanked Chris Rock's brother about this clog. I was about to slip him a $5 tip but he rushed out the door. I couldn't palm him the cash and he was halfway down the alley when I asked how deep the clog ran. He didn't give me a number, but said, "As far back as the bathroom." That's on the other side of the apartment. I was too stoned to do the math.