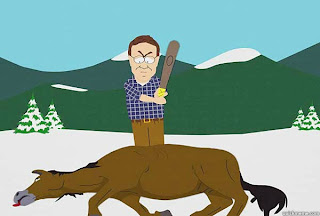 You never want to sneeze when you pee. I guess that was the proper way to start the day. Ahhhhhhhchoo! Followed by a drizzle. Splash.

It could have been worse.

What could be worse than urine on immaculate tile? How about the Vice President of Warner Brothers walking into the rest room and witnessing the sneeze-drizzle combo. Or how about even worse than that? The VP could have been at the urinal next to me, and I accidentally sneeze-drizzled on his sparkly shined shoes and new suit.

For fuck's sake. Those are Italian imports.

A wise soul once said (could have been Ari Gold's flunkies on Entourage), "You're not the only writer who pissed on the floor at Warner Brothers. You won't be the last."

That's the one demoralizing thing about Hollywood. When you think you did something original, some has already beaten you to it.

Then again, I look around and marvel at the fancy houses tucked away in the hills, and sneer at all those gaudy homes infesting the shores of Malibu, and I suddenly realize there's moolah to be made in recycling old themes. Recycling old shit. Repeats of old schtick.

"Beat the fuck out of that dead horse until that last goddamned penny squeezed out of its bloody ass."

All this time I thought the key to artistic success was originality. Creating new things. Blazing new trails. I was trying to strike gold by moving froward. It's always foolish to chase down today's fad. But instead of worrying about tomorrow's new thing, seems like there's significant amount of money to be made by going backwards.

Hey, we're not saving the fucking whales here. I'm just trying to keep up this hustle while there's still a way to hustle. You might dig the written word, but it's getting harder and harder to get paid to do it. Long-form writers for hire will become an endangered species. In 18 months the network news will just be a hologram reading tweets of famous people to you. Oh wait, that's already happening... except the holograms. As soon as mega-news-corps figure out how deliver the news without humans... they'll fucking do it. Robots and holograms never whine about a raise.

I thought I was going nuts. Chasing my own shadow. Losing sleep. Lost in thought trying to create a new website next year. Trying to write a reality TV show. Trying to write a new book. I'm doing it all wrong. Instead of going forward, I need to reverse my caravan. I'll sit out the poker game for a couple more years, then reboot Tao of Poker. Old brand, but new formula! Or more like old formula, new fonts! Whatever. You get the drift. I was ready to stay away forever, but I got a change of heart.

Funny how one sneeze-drizzle can make you change your entire outlook on the world.

I got sick of writing about soulless degenerates, jaded hookers, and old people so addicted to slot machines that they're sitting in their own body fluids. But in a few years, there'll be a huge demand for those tales of desperation and depravity. Again.

Hey, I'm not proud of it... but how else am I going to make a buck? How can I write the great American novel and make up stories about the death of the American dream when all you have to do is turn on the TV and you get a healthy dose of the downfall of civilization. That futuristic dystopia is now. Welcome to the Surveillance States of America. With our friendly skies patrolled by drones that may or may not be run by rogue AI that will someday stop listening to human commands. Even my twisted mind can't compete with all the weird shit that's happening. My fiction is trite compared to what's going in the world. That's why I need to wise up and start beating up dead horses. If it's good enough for the fat cat Berbers running Hollyweird, then its good enough for me.

It comes down to timing. I need to sit out with Tao Poker another year or three. Then wait for a perfect time to go retro. It's like squatting on a fashion trend and waiting until it gets hip again.

That reminds me of a work friend from Seattle. He was into the Swing Revival that swept America in the late 90s (I blame Swingers... fucking Favreau). A couple of my housemates were curious about this Swing craze and they took dancing lessons. So did my co-worker. He and his wife signed up and became so good so fast that they were tapped to teach a beginner's class because the original class got so popular that they had to add more classes. Swing was blowing up in post-grunge Seattle. He got a brand new wardrobe including three, very expensive, vintage zoot suits he had custom made. He even created artwork (mostly concert posters) for a local "swing" big band that was a third-rate knock off of the Big Squirrel Testicle Zipperheads Voodoo Daddy, or whatever they were fucking called. Of course, this swing fad was short-lived and died around the turn of the millennium. The Revival became a faint memory. No one was interested in classes. The swing band broke up. He got divorced when his wife ran off with some dude in an "electronica" band. Worst of all, none of the clothes he wore were hip anymore. Even the first wave of hipsters that blew through Seattle post-Tech Boom wouldn't dare putting on a zoot suit. He had two choices... send his zoots to Goodwill, or hope that another Swing Revival returns and his zoots are in style once again. I hope he has a lot of mothballs.

So yeah, Tao of Poker is my zoot suit. I'm not gonna bust my ass and create a new site. I'll reboot an old one instead. Ain't broke, don't fix it. Einstein said that. Or Yogi Berra. Or neither. Maybe it was a fortune cookie or a Psalm?

Much easier to recycle an old idea. I have dozens of sites too that are boarded up relics of the past that only need a fresh coat of paint and its ready to roll. All I have to do is inject a few updated pop culture references and then deceive the readers into thinking they're getting new stories that are really formulaic bits of tripe I had already churned out a decade earlier.

Shut up and play the hits! Have I told you the last 5 pros I pissed next to? Have I told you about playing Pai Gow with (myself) until 4am and leaving after (I) went on mega-monkey-tilt and screamed at a dealer from Hong Kong?

Hopefully no one will even notice. Most of my readers are alkies and drug addicts, so many they'll be to wasted to know? By then Obama Care will kick in and everyone will be taking their government-issued Happy Pill. You'll have to wait until 2017 before Big(Pharma)Brother issue chewable Xanax in cherry and grape flavors for children (you can sill catch a decent Xannie-buzz on the kids' chewables, but only if you crush them up and snort it... obvious downside is purple boogers).

And the one or two Tao Poker purists who bitch about the recycled retro content? Well, I'll applaud them for their keen attention to detail and being able to differentiate new stuff from derivatives of derivatives. They know a hack when they see one but at that point, I won't give a shit because I'll be crocked on Government-issued Happy Pills.

Besides, I'm returning to the fray with the specific intentions of trying to be as redonklous as possible and see how far I can get away repackaging old schtick.

Like whipping a dead horse. It ain't going to be more dead than it is. You don't need an emo Scandi philosopher to tell you that. But when those whip marks dig in deep, well, that's entertainment son! Give the people what they want. Beating horses to death is how Hollywood studios rake in billions every year. If you can't beat them... join them.

Goosebumps. I get goosebumps when I think about the money truck with the Monopoly Man logo on the side that is rumbling down my street past the swaying palm trees to dump off a couple of bags of cheddar cheese Benjamins.

Oh, and I'll be introducing a new site in 2014. Just to you know... keep it real, so I can get street cred with my friends who are hardcore anarchists, and anti-Establishment militants, And those are my Wall Street friends. I haven't even talked about those Occupy-crazed hippies. But I'm sure they'll appreciate my new website...

Tao of Beating Horses to Death.

Seriously. It's called Tao of Beating Horses to Death. For brevity and Twitter, it will be @TaoDeadHorses.

I can't wait to start answering hate mail from ornery PETA furry fanatics. Those bellicose pet activists are my type of pugnacious folks. They absolutely love all animals unconditionally, but can't fucking stand people. Maybe I should join PETA? But I'm allergic to cats, so I might not pass the initiation test.
by Pauly at 8/21/2013 11:11:00 PM