A Few More Lingering Flashbacks from the Circus 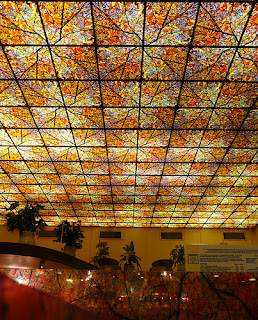 I forgot about the ceiling. A snooty art collector would dismiss it. From a distance it looks like a stained-glass masterpiece. Up close, it's definitely not Tiffany glass. Upon closer inspection, you can see the autumn leaves. It's ubiquitous sunshine in Southern California and I rarely get a whiff of the four seasons in a part of the world where its perpetual summer. I missed the seasonal differences of the East Coast. The only brown leaves on trees in LA can be found on the ceiling at Canter's.

I forgot about how trippy the ceiling is if... 1) you see it for the first time, and 2) crocked on psychedelics. Neither was the case for me. I totally forgot about it until we were seated in a booth and Schwilly Meg could not stop looking up. We had our faces buried in the oversized menu, yet Schwilly Meg was gazing at the show up on the ceiling.

I elbowed Nicky and motioned toward Schwilly Meg. Nicky giggled and said, "Yeah, I forgot the ceiling. Must be a dozen people in here still fucked up from the concert and getting a cool after-show."

For a city as big as Los Angeles, there are limited places to eat after Midnight. One of the few 24/7 places -- Canter's Deli -- is not far from our apartment. It was on our way home from the Hollywood Bowl. None of us ate dinner. We drove down from San Francisco to LA earlier that day and woofed down a few beers before heading to the Bowl. We got caught in traffic and never had a chance to grab food... until after the show when we were starving.

Canter's used to be the "Esquire Theatre" (for movies in the 1940s and early 50s) before it was converted into a deli. It's sort of a late-night LA institution and you usually end up there after a night of partying. Canter's was on my radar because I knew it would be open, plus there was a dive bar attached to it, so I knew they served liquor until at least 2am. If you really want a wasted celebrity encounter in LA, then hang out at Canter's at 3:33am and maybe you'll spot someone "famous" at the tail end of a bender. But it was closer to Midnight and Canter's was packed, while Schwilly Meg got lost in the leaves on the ceiling.

The waitress lumbered over. That's when Broseph belted out his order. Four drinks. Water. Coffee. Beer. Whiskey. Pretty simple. I thought she'd screw it up because the place was packed and she was in the weeds. To her credit, the drinks arrived... as ordered. The waitress did manage to fuck up Schwilly Meg's order. She wanted banana pancakes, but the waitress dropped off potato pancakes. Huge difference. 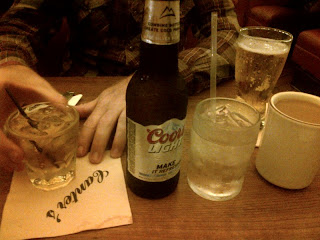 One day in Chicago, I met Grubby for lunch. He's been living there for a couple of years and we always missed each other whenever I was in town. He told Senor old Vegas war stories... like the time he tried to pick a stripper but somehow a midget was involved and that added variable threw everything out of whack. Got flashbacks of when I first moved to Vegas and used to hang out with Grubby. But now he's living in Chicago, a safe distance from Vegas. Yet no matter where we go, Vegas stories are always somewhere beneath the surface waiting to bubble up like a batch of swamp gas.

In Chicago, I lost a hit of acid in the park when I fumbled it during the exchange. A gust of wind blew up out of nowhere and poof! The dose fluttered away in the wind. I tried to look for it... but it was the side of a sharp hill. Like finding a needle in a haystack. I hope a squirrel doesn't stumble upon it, otherwise that rascal will be tripping balls.

I got addicted to mint M&Ms. In the green bag. I have not seen them in L.A. but I saw them all over Seattle, Tahoe and San Francisco. It's like biting into a mint, but with an M&M coating.

Iced tea was tough on the road. I was brewing my own batch of tea every morning and made it super strong almost equivalent to a cup of coffee (tea is typically 50% the strength of coffee). I don't drink coffee, but Starbucks is fucking everywhere. I don't like to give those corporate-tards my money, but someone had given me a gift card so I busted it out on the trip for a "gourmet" iced tea, which is pretty meh. Starbucks tea is just average compared to Coffee Bean.

We camped out at the Gorge and I resorted to cold brewing Lipton using bottles of water and three tea bags. It's methadone more than anything else. But, when I mixed it with Nicky's lemonade (Hubert's... tasty shit in skinny glass bottles), I made a palatable Arnold Palmer. Just add molly and or vodka.

In Chicago, the W was next to a 24-hour McDonalds. Yeah, I know... an odd pairing. I popped into McDs three or four times a day. Large drinks were $1. I picked up 2 iced teas at a time. In San Francisco, there was a Jack in the Box around the corner. The Joker popped over one morning and got me a big-assed tea, which was perfect because I was about to sit down and write and crank out a review of the Tahoe shows.

3:30am. San Francisco. We heard a shooting. Nothing sobers you up quick enough than gunshots. Two quick pops. Ironic that we were in the nicer, more touristy area and one block from Union Square, versus the edge of the Tenderloin where we stayed.

We lucked out with the cool cabins in Tahoe. The Joker, Wildo, and Carrie had more of a suite. We had room that overlooked the pool. We were three stories up and I quickly tried to remember my high school physics formulas to see if someone could jump off my third-floor balcony and survived the dive into a six foot deep pool (the answer was no fucking way).  Now the second floor? That was doable. Funny to see a random family sitting at the pool while it was invaded by Phishy types and people trying to a quick nap poolside before the show began.

I got to see Zobo, who I had not seen in years. We met each other in Japan during Phish tour in 2000. He had a cabin really close to the venue, so we could sit on his porch and listen to the soundcheck. He's friends with the Japhans whom stream some of the shows. I even got to meet a former Japanese rockstar, who was enjoying the anonymous life in America... while he embedded himself with hippies on Phish tour.

Nicky went deep in a charity poker tournament. I was a bounty player and busted early again... but not as early as the last two charity events (when I was also a bounty). I was hoping to finally prove my worthiness and had my sights set on the final table. Alas, I took a bad beat and busted mid-way. Jesse Martin, a friend who happens to be a poker pro, took a seat at my table and I didn't get a chance to play a hand with him (the one hand I shoved... he got out of the way). Wildo almost made the final table... but he busted out in 12th place. But Nicky? She's rusty, yet still has tournament skills.

Good to see the "2001" stickers made cameos in different cities on this trip. Splattered all over the mean streets of Chicago, Seattle, Tahoe, and San Francisco. I also saw a bunch in the port-o-pots at the Gorge and one vendor in Shakedown let me put up a sticker  on his menu board. I sold a bunch at the Gorge and a few in Tahoe. Rained too much in Chicago and it seriously lacked a Shakedown area, so no real spot to hawk goods.

I listened to Wild Belle's album nonstop. You might have heard their song It's Too Late. I had a similar postmodern-hipster-pop phase when I got my hands on Foxygen's album earlier in the year. But there's something about the lead singer from WB. She reminds me of that hot chick from college who flirts with you all night and you foolishly let her snort/smoke all your drugs because you're convinced you're gonna hook up, but you get nadda, not even a hand job as she waltzes out the door and off to another party.

When I was in Seattle visiting old friends, Kung-fu Tom turned me onto Albert King's greatest hits. Some funky-ass soulful blues-funk right there. Glad I got to hang out with Tom... he always turns me onto good music. He wants me to pick up bass so we can start a band together. I said we'd call it... "White Men Can't Funk."

In Seattle, I stopped by where I used to work and wandered around the Seattle Art Museum and the Frye Art Museum. I dug the fact that SAM is "suggested" donation. I offered to pay half price. I usually only donate $1 to the Met because they try to dupe the public into paying redonkulous price. I thought about putting $1 on my credit card, but then thought that'd be a dick move.

But at SAM at a special gallery for Aboriginal art, I got lost in one of the trippiest paintings I had seen in years. This fucker was alive and breathing when I walked by... 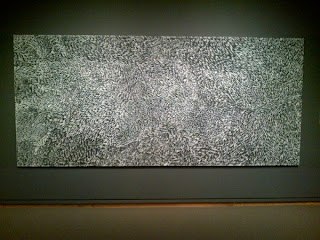