Feed All the Kangaroos 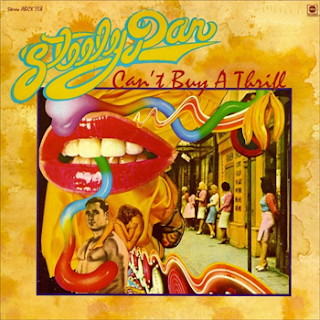 Nicky was shocked... that I had a list and that Steely Dan was up so high.

Of course, I didn't. I was fucking around with her. But I'd say if I had to rank bands (no solo acts) it's around there.

"Steely Dan was in the Top 10, but they got nudged out by My Morning Jacket (10th) and LCD Soundsystem (11th). Hence. Twelve. Steely Dan. My 12th most favorite band."

There are two types of people in this world.....

The haters are like 99% of America. Steely Dan fans are in the 1%. Which is funny, because you really have to be a One-percenter in order to afford a ticket to a Steely Dan concert at the Nokia Theatre in downtown LA. Seriously.... $295 for a pit? $175 for an orchestra? Even the cheap seats (with added costs like juice and other corporate shakedown fees) were $60 for the privileged of sitting in the last four rows of the mezzanine in the back corner of the theatre. No man's land. Where the sound was muddy and drunkards loudly talked and spilled over-priced warm beers on everyone.

I listened to a significant amount of classic rock on the radio in my teens and 20s, so at some point you cannot listen to a couple hours without hearing at least one Steely Dan song. Usually it was Peg. Sometimes you'd hear Reelin' In the Years. I always thought it was funny that Diane Court's dad from Say Anything listened to Ricki Don't Lose That Number in one scene when he was elated and driving down the street and singing along.

In college, Jerry had Steely Dan's greatest hits and he used to play it all the time because he loved Peg. That's how I learned all the lyrics. I lived next door to Jerry that year, so after the first week or so, I had Peg down. The rest? Not so much.

I was swamped with work and exhausted after finishing up a crash course on the upcoming NFL season. I had a couple (looming) deadlines, a book to read (before Monday), and a couple of fantasy drafts to prepare. But I still wanted to squeeze in a quick concert. Steely Dan. Downtown at the Nokia Theatre. I heard they were performing the AJA album -- all seven songs -- plus a smattering a greatest hits. On this summer's tour, Steely Dan performed the same setlist every show which included four songs off of AJA.

The music of Steely Dane is something of an acquired taste. About a decade ago, my friend Tony gave me MP3 copies of every Steely Dan album. I no longer just had a few single tracks. I had access to deep cuts. I didn't really dig into the archives until I moved to California a few years later. I discovered that Walter Becker and Donald Fagen from Steely Dan were displaced (writers) from NYC living in Los Angeles, which felt like another planet to them. I decided to explore their music and lyrics, especially from their AJA album, in hopes of finding someone who understood the abrasive adjustment period I was struggling with as a New Yorker lost in the shadows of Hollyweird.


The more I listened to Josie (see video above to hear it on vinyl), the more I realized it's the appropriate vehicle to described my particularly twisted NYC-to-LA experience. Eerily similar to Becker/Fagen's fish-out-of-water trip through Hollywood when they moved out here in the late 60s/early 70s. They relayed that East Coast vs. West Coast artistic and emotional struggle through various lyrics and grooves throughout the AJA album.

Nicky was not keen on going to Steely Dan. For one, she didn't like the music. The other was the crowd.

When I first started dating Nicky, I used to play a lot of Steely Dan because it drove her nuts. She hated it. I mean really hated Steely Dan. I'd put on Peg and in my cheesiest disc jockey voice, I'd scream "Two for Tuesdays!" (even if it was Friday) and then when Peg ended, I'd play a second Steely Dan song. And a third. And a fourth. Until she gave up and ran out of the room. Hey, I don't give her shit for loving showtunes and singing along to Glee. Then again, she recently found out that I saw the Disco Biscuits 27 times in concert, and she was mortified. She's still processing that nugget. I'm surprised she's still with me.

She said she wouldn't go to Steely Dan (even if I paid for her ticket), but insisted that I go by myself. She'd even give me a ride downtown and drop me off.

Raging solo at Steely Dan? Yeah. No one else I know digs them as much as me (aside from Lee Jones and G-Money). I always wanted to start a Steely Dan cover band, but I always got rejected. Besides, Huey Lewis songs are much easier to play.

I have no problems going to concerts, or even movies by myself. I love the intimate feeling of being one of the only people in a theatre. And concerts? It's a lot easier moving around if you're by yourself. I'd really like to investigate different parts of the scene at the Nokia Theatre, but it was not a general admission show, I couldn't roam around.

I was eying a single pit ticket (third row, center) via Stub Hubb. The seller originally priced it at $400, or a $105 mark-up. By mid-afternoon, the seller dropped it to $300. Three hours to show time, it dropped to $275. Over the next hour, the price dipped down. First to $250. Then $225. Then $195. At that point, the seller freaked out and decided to do anything to sell it, even if he took a $100 hit. I set my baseline at $125. I just had to wait another hour until the seller got desperate and dropped it by another $50 bucks. $125 seems steep, but it's third row center and like half price from the amount that those greedheads Walter Becker and Donald Fagen were trying to milk from their (wealthy) fans. I refused to pay $275 for a pit.... but $125 was doable. When am I going to see Steely Dan again? They're old and might never tour again. I had an option... $60 in the nosebleeds with the hoi polloi, or up close with the rich hippies for only $125?

Too bad the ticket got sold ninety minutes before show time. It never came down from $195. I kept refreshing the page until the listing vanished. A fan decided that $100 discount on a third row seat was worth it. Fuck me. I had had only two choices left online... spending $150 for the far corner of the orchestra, or $60 up in the cheap seats.

Or, I could take my chances out front with the scalpers. But would there be any? Most of the pro ticket mongers would be across the street and circling Staples Arena. Taylor Swift was the hottest ticket in town. According to Lefsetz, Taylor Swift is one of the few acts that could sell out Staples for a multi-night run. Her tickets were going for $200+ online and those were shitty seats so far up that they might as well be listed as "roof tickets." Shit, anything close in the 100 levels would cost at least $400-500. I'd hate to be the dad who got stuck shelling out $1,000 on a pair of tickets.

There's a hyper-profitable demand for Taylor Swift... today. Maybe in thirty years she'll be churning out water-down, slower versions of "greatest hits" shows at small theatres. She's the "it" girl today. Who knows what tomorrow will bring. She's just one meltdown and two-week cocaine/pills/vodka bender away from beginning the second act of her E! True Hollywood Story.

That's today's music biz for you. The juicy demographics that actually spend money on concerts are older people with oodles of money to blow on bands they loves as a teenager/twentysomething, or teenagers feasting on pop music. Nostalgia acts from the 70s are one of the few ways you can get away charging $200-300 for a ticket (e.g. Roger Waters, Bruce Springsteen, Eagles or Steely Dan). Otherwise, you have to be today's mega-star du jour (e.g. Taylor Swift or Drake) in order to rake in a triple digit price tag. There's very little in between... unless you're a country act. That shit still sells. And that's why suits loved Taylor Swift. She came up through the country ranks but she had crossover appeal.

The drugs are getting stronger and the music is getting worse. That's the best way I can describe Skrillex.

At least I feel young at a Steely Dan concert. Sometimes at Phish shows, especially during the summer, I feel like I'm the old fart in the crowd. This is becoming troubling for me because I intend to never stop going to concerts. Then again, no matter where I go, I feel like I'm the misfit and outsider, so this is a universal feeling.

I often have random flashbacks of being 17-18 and wandering through the crowded hallways at Madison Square Garden or the Omni as the youngest person in a sea of tie-dye at a Grateful Dead show. I was like the little kid who ran away from home to join the psychedelic circus. And now 20+ years later, I'm the middle-aged balding guy at the show trying to relive old glory days. No wonder my Colorado friends poker fun at me by calling me "Brett Favre" because I'm a jaded vet ddicted to painkillers and hobbling around the parking lot.

Steely Dan? Wading through a sea of old hippies... I'm a spring chicken.

Becker/Fagen discuss in lengthy detail about the process behind making AJA (recorded in 1977) in this mini-documentary...