The (Melodious) Voice That Silenced the Machines 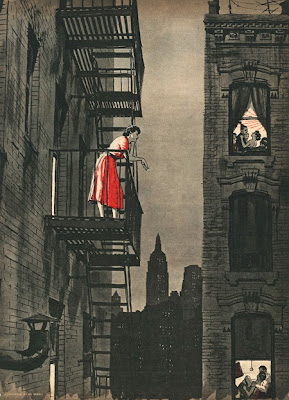 I miss the actress. I should say, I miss her randomly singing. Either in the shower, or rehearsing for an audition, or belting out a number out of sheer glee.

I don't miss her disruptive arguments with her alkie boyfriend. Those were ugly and cast a negative cloud over the both of our buildings.

I forgot I had taped them battling each other during a vicious screaming match until one night in Tahoe when we were farting around recording Wook Patrol podcasts. I stumbled upon a sub-folder that housed 20-25 files. All clips of the actress. We listened to a couple, but then I felt weird about sharing those intimate moments of hell. Sure, my friends were all tripping balls and anything seemed entertaining to them, but I felt compelled to turn it off.

The arguments were frequent. Sometimes you could hear her boyfriend, sometimes not. Sometimes she did all the shouting and he was the calm and reasonable one. Sometimes he wasn't there and she was shouting into her phone. One afternoon after a protracted spat that accumulated in the boyfriend slamming the door and leaving, I overheard her leave seven consecutive voicemails inside of a 30 minute period. I think his voicemail would only allow a message up to 4 minutes. She maxed it out every time and when she got cut off, she re-dailed and ranted for another 4 minutes before she got cut off and repeated the process.

I wrote about her a lot. Like in Monday Morning Lurid Gaze or The Actress Took Down the Curtains, or Three Empty Apartments. And now that she's been gone for a while, I miss her... singing.

Sometimes I think the Slums of Beverly Hills is the most boring neighborhood in Los Angeles, which is something I need in order to focus on writing. Isolation and serenity is a positive thing because I get distracted by too many sparkly things. When I lived in San Francisco, even though the LoPac wasn't the hippest neighborhood, there was still a bunch of stuff going on to keep me engaged. Even when I lived in Vegas, I was usually in the burbs (Henderson or Summerlin) but only 5-10 minutes away from a locals' casino and had plenty of chances to get into trouble. But Vegas is one of the loneliest places on the planet, especially when you wander through a maze of slot machines and surrounded by pathetic losers hopelessly addicted to being a loser. I used to think gambling addicts were addicted to gambling, but now I think a large percentage of them are addicted to losing. Makes me think about the actress. She wasn't addicted to drama, she was addicted to dating pretty boy losers because they made her feel like shit, a feel that she sought after more than the adulation of adoring fans, which every actress seeks out.

Jesus, I hate to fucking quote Jim Morrison, but here I am... "People are strange."

I'm surrounded by strange freaks. In San Francisco, I was pretty well adjusted all things considered (like having to worry about stepping on human grenades -- yes, piles of feces), but for such a lame/tame neighborhood in Los Angeles, it's fucking noisy. Mostly with vapid neighbors trying to keep up appearances by getting their yards cut. The manicuring process is never done in an orderly fashion and it seems like 30 different lots are serviced by 30 different landscaping crews. The mornings are filled with the commotion of nonstop leafblowers and hedgecutters. Noise pollution. All for the sake of keeping up appearances.

And then there's the bat-shit crazy people contributing to the chatter. Some of them shout at each other. Like the random ethnic couple a few house down. I still haven't figured out where they are from. Maybe Laos? Maybe Thailand? Greece? Albanian? Maybe from Bensonhurst? The old guy never says much, but his wife unleashes on him like a pissed off head coach with a vein bulging out of his neck tearing his offensive line a new asshole for picking up way too many penalties.

The most twisted neighbors shout at... who knows what. God? Invisible people? Aliens? The TV? Ghosts? But whenever they shout, their echos carrying throughout the alley. I wonder if someone in my hood writes a Tumblr about their crazy neighbors and they go on rants about how I'm a degenerate sportsbetting loser shitbag who loses my shit whenever an aloof 7-footer clanks a free throw.

In the meantime, I miss the actress. I miss the echo of her voice in the shower. Angelic and soothing and melodious. Her voice drowned out all of the whirling sounds of the machines.
by Pauly at 8/16/2013 04:20:00 PM