When Flying Monkeys March Through the Flooded Streets Like Saints 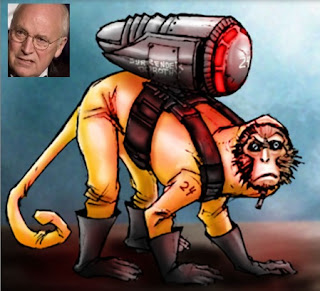 It's a Wizard of Oz thing. First time I ever saw that flick, I had nightmares about flying monkeys. I must've been five or six years old. Perpetually scared that an armada of flying monkeys would swoop into my apartment in the middle of the night and steal me away from my family and drag me to a cave underneath the Palisades.

Fighting for our hearts and minds.

Flying monkeys win. Most of the time.

Unless of course it's the obvious. That the Armageddon and Jesus showed up with an army of flying monkeys to help sort out Judgement Day. You figure that the Lord Almighty would outsource the security aspect of the Armageddon to a bunch of rent-a-cops... er, min-wage flying monkeys. They'll handle traffic jams and all media requests. Archangels are more like special forces and Jesus tasked them with more serious responsibilities and missions during the Second Coming, such as rubbing out high-profile sinners (Every Kardashian and anyone with a Lady GaGa record) and religious leaders (like any TV evangelist, Dick Cheney, and Paula Dean).

Last time I made a half-baked flying monkey joke in Vegas, someone got a little sand in their vagina and bitched and moaned about how insensitive I was. Too bad. It was a pretty fucking funny joke too.

I made flying monkeys reference to a friend a few months ago. We were making fun about billionaires so rich they could afford their own island. No one will ever be rich enough to own all of Manhattan Island, but you never know. Supreme power is possible if you can harness the power of an army of flying monkeys. No one expects the Spanish Inquisition. Same could be said about the flying monkeys.

Who needs drones when you can have flying monkeys patrolling the skies above Gotham?

Or how about Flying Monkeys vs. Drones? Now that would be a silly, yet sick video game. The monkeys have swords and a few Jedi-like monkeys have light sabers. They swat slower drones out of the sky while the speedy drones decimated entire flocks of flying monkeys with their advanced weaponry.

When you're Dick Cheney, you have access to high-grade pharmaceutical cocaine. Top shelf. Anything inferior? And Cheney shoots your face off.

In the drones/flying monkey sequel... Dick Cheney's pickled brain cloned itself and he's trying to create a super-weapon to destroy rebel Flying Monkeys hiding out on an ice planet on the edge of the galaxy.