I'm swamped with catch up work. Or call it bitch work for you non-PC folks. That's OK. It keeps my mind off of other things and definitely keeps me humble. I'm happy to be home again. Being back in NYC is a good thing since I'll be on the road a lot over the next several months so I'm enjoying the little things about this city that make it great. I've been eating bagels almost every morning. In Europe, Briana got me addicted to croissants. There are not as filling as a bagel and I usually have to eat two to get the same morning bread fix. In Las Vegas, they had no equivalent to bagels and croissants. The closest thing within walking distance to the Redneck Riviera was a McD's and a Wendy's. Since I was crashing at 6 or 7am every night that by the time I woke up, it was the lunch rush hour. Yikes. I just realized that I spent most of my time in Las Vegas eating fast food for breakfast. No wonder I put on 15 pounds. It was my poor eating habits and all the beer I was drinking at the Hooker Bar with Otis during dinner breaks. 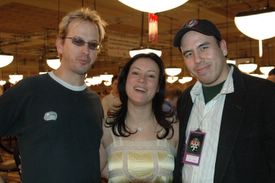 Speaking of Las Vegas, I watched the most recent two episodes of the WSOP on ESPN last night with my brother. And fuck, I saw my ugly mug plastered all over the Johnny Fuckin' Chan episode. Originally ESPN was scheduled to tape the $2,500 NL event. That night there were two final tables, the $2500 NL and the $2500 PLH event. There were a lot of unknown online players and newbies at the $2500 NL TV table and the PLH table featured Johnny Chan, Humberto Brenes, and Phil Laak. It seemed they had more railbirds and media sweating them on the outer tables than the other event on the main stage. Even ESPN's second unit was all over Chan's table. I recall that Dan from Pokerati got yelled at for standing on a chair by one of the ESPN producers.

Last night I got a few comments from readers about seeing me in the background. I got several emails and a few voicemails. My friend Julie even sent me a text message, "I just saw you on ESPN!"

Man, I was just a few feet from the table when Johnny Chan cracked pocket Aces with the Hilton Sisters (see photo below). The suits at ESPN took note of the significance of Johnny Chan's run. As the players were being eliminated at the PLH table and Chan got closer and closer to winning his 10th bracelet, they gave the PLH table more coverage. When it got down to two, an executive decision was made to postpone the heads up match between Chan and Laak and shoot it on the final TV table after the $2500 NL event was complete. They waited for almost two hours before Chan and Laak played heads up. During the break, I wandered out into the casino to find some ginger ale to drink. I spotted Phil Laak sprinting at top speed. He was running right at me in the long corridors that connect the Convention Area to the rest of the casino.

"Slow down Phil, you got plenty of time!" I yelled.

There were plenty of media folks who got face time during that epic episode. As soon as someone wins a bracelet, you can see Flipchip in the background snapping a photo. I also saw Sharla from Poker Pages, Jay Greenspan, and Heather from Poker Wire. BJ was in the background in media row and I know Otis was back there too. During the Chan-Laak heads up match, I was seated in the front row with Earl from Poker News, Rick The Voice, and Doyle Brunson.

How the fuck did that happen?

I'm still in shock almost three months later. Watching Johnny Chan win his 10th bracelet was my favorite moment during the six hellacious weeks I covered the 2005 WSOP. It might have been one of the coolest things I got to see in my life. 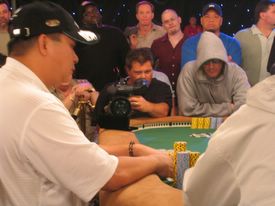 Chan & Laak on the outer tables: a view from my seat 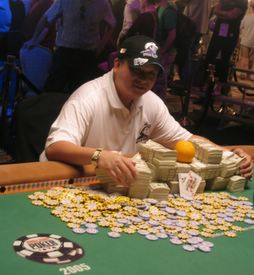 That's it for now. If you haven't seen that epsiode, set your TiVos and VCRs and check your local listings for when ESPN will rerun that episode.

More Boathouse Bash stories are trickling in. Be sure to read: Derek, AlCantHang, StB, Bobby Bracelet, Spaceman, F Train, Joaquin, Helix, Carter, and Bad Blood. And yeah, and Eva too!

Update: Ah... I forgot that Steph had a blog! Check out her take on the events over at Clareified. She might have one of the best recaps that I've read. She also had this hilarious post on her site about playing with bloggers for the first time:

TOP FIVE SIGNS YOU'RE IN OVER YOUR HEAD...

5. Everyone else at the table is re-raising pre-flop with 27o.

4. Half the people at the table get paid to write about poker.

3. One player starts live-blogging the action out loud during the game.

1. The guy sitting next to you has Phil Gordon's cell phone number.