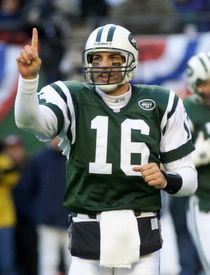 I still have a bunch of stuff left over that I never blogged yesterday. By the way, this week is a huge sports week. The Yankees and the Red Sox have to play a weekend series and that will determine who goes to the playoffs. Should be epic. Let's hope the Yanks don't blow it. Glad that I'll be home to watch the games!

The NY Jets are hurting after they lost Chad "Paper Thin" Pennington and Jay "Oceanside, LI" Fielder on Sunday to serious season-ending injuries. Talk about bad fuckin' luck. It's all up to the aging Vinny Testaverde to lead gang Green to the playoffs. By the way, did you know that Testaverde in Latin means "color blind"?

Rolling Stone has a nice blurb about Trey Anastasio and his upcoming tour to promote his album Shine. I heard most of the cuts already and I'm not totally into his new stuff just yet. He's supposed to open for the Rolling Stones on two dates. I scored tickets for two shows on his fall tour in NYC and in Connecticut. I don't like Roseland Ballroom, but heck it's Trey so I'll go. I'm trying to score a ticket to the LA show at the Wiltern.

In marijuana news... California man is busted from growing a ton of pot. But it's for medicinal usage, dude?

This one if for Bobby Bracelet! Have you ever suffered from cyclist penis?

For all you geeks out there, here's a list of 20 things tech companies don't want you to know.

File this one under... Only in Canada, eh? Former prime minister beleives in UFOs. Here's a bit:

The 82-year-old Hellyer says he believes not only that UFOs are extraterrestrial visitors, but that some governments - the United States at least - know all about it and are covering up. He says he believes American scientists have re-engineered alien wreckage from a supposed UFO crash at Roswell, N.M. in 1947 to produce modern technical marvels.