Phil Hellmuth won his 10th bracelet and I missed it. I decided to go to the BoDog party at Tao instead.

Change100 and I showed up fashionably late to Tao for what's going to be known the best party at this year's WSOP. We walked right in past the velvet red ropes and waited for the elevator up to the night club. A chick with a tight black spandex/latex black tube dress operated the elevator. As soon as the doors opened, we were greeted by of a huge wall that resembled Buddhist shrine... except that a champagne bar sat underneath. 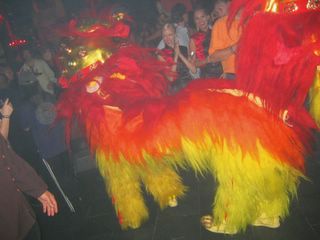 Found our way into the main room and started the flurry of Kettle One and Red Bulls. The DJ played a lot of late 1970s disco and 1980s pop music. Amazingly hot girls in black and red Oriental style dresses with Bodog branding flooded the dance floor and took up space at the bar. Saw the usual suspects... JW, Friedman, Tim, Amy, Jen Leo, Caldwell, Scott Huff, Jay Greenspan and Jason from Paradise Poker. 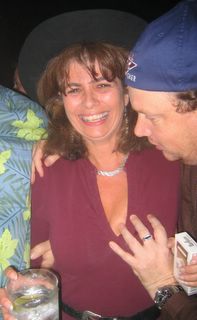 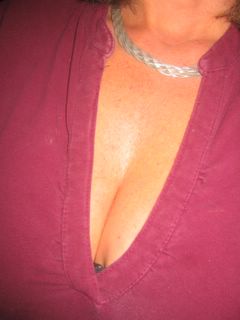 More cleavage
Gavin Smith was the only person in the club wearing a hat. It was a backwards Full Tilt hat of all things. Only Gavin Smith could get around wearing a Full Tilt hat at a BoDog party. Gavin was pretty smashed. He shoved his hand down Amy Calistri's shirt. He also took on The Black Widow in a game of pool. He won, but admitted to me that he cheated.

I spotted random pros wandering around like Clonie Gowen, Josh Arieh, Kenna James, Andy Bloch, and Humberto Brenes. Found the hookah room which had an ice cream sundae station. They had better music in that room, with tons of James Brown sampled hip hop. 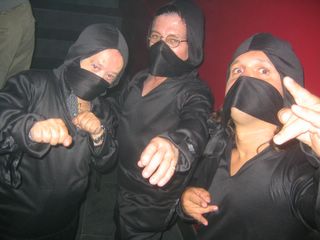 Hung out in front of the naked girl in a bathtub filled with warm water and rose petals. Saw weird shit that you'd only see in Las Vegas like the midget ninjas. I mistook one for Iggy for a few moments. They stood in line in front of me at the bathroom. It seems that midget ninjas urinate in groups of three. They all ran into the same stall together to rip a few lines of Peruvian snowflake.

Jacked up ninjas and women in lingerie sitting in bird cages... and you wonder why I left the Rio early?

Thanks to the dudes at Wicked Chops Poker for the invite. And congrats to Phil Hellmuth for winning #10.