I got less than two hours of sleep last night. I had multiple deadlines and got them both done in time. One article called Multiple Personalities was recently published on Fox Sports. Take a peek.

On Sunday, I went to the House of Cards where Jen Leo and some of her friends share a huge mansion with a swimming pool, beach volleyball court, and a par 3 golf course.

We watched her performance on The Poker Dome. I sat in the audience when it was taped a few weeks ago. It was cool to see one of my friends on a televised poker show.

I was invited to Liz Lieu's surprise birthday party at Pure by John Phan. Pure is one of the swanky Vegas clubs where on a weekend night, the line wraps around and through the entire casino. I was listed on the guest list simply as: Pauly + 1. Change100 was my plus one. 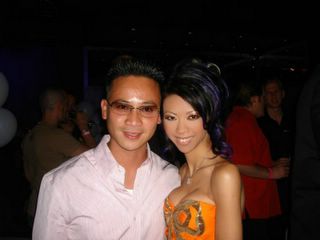 John & Liz
The cool part about these parties is the open bar and that they are invite-only private functions and I don't have to stand in line to get in. The bad part is that I have to get dressed up. Change100 took me shopping again this past weekend. I bought a nice shirt too.

Liz's party kicked off the start of the party season at the World Series of Poker. Several online poker rooms throw big parties along with random poker players. I did two parties on Sunday, and on Tuesday night I got invited to BoDog's party at TAO. I Should be an interesting mix of people and might be the best party of the poker season.

Wednesday night is Full Tilt's party at Pure. Hmmm... Pure twice in one night? Never will happen again in my lifetime. Last year, I got hammered at La Bete in Wynn. I closed down the bar with the Poker Prof, Daniel Negreanu, and two Irish poker players.

The main event of the WSOP starts on Friday. It's gonna be two weeks long and test my writing ability, my patience, and my endurance. I'm mentally ready but this week of partying before the main event is gonna zap me. I'm already running on vapors after a month long bender that included two weekends of Widespread Panic, Bonnaroo, and the bloggers convention in Las Vegas.