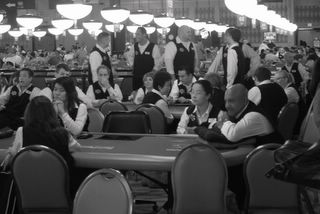 Jen Leo said she loved the above photo and wants a hard copy to hang in her house.

My buddy Micahlski assembled an amazing team to cover the World Series of Poker at Pokerblog.com which included Jen Leo, April, Amy Calistri, Change100, Foiled Coup, Chris Newton, and Tim Lavalli. Change100 has been writing some kick ass stuff in her daily fashion report. The last one she posted was so funny I nearly pissed myself. Take a peek at WSOP Fashion Report: Today's Winners and Loser.

Grubby has been on the road for two days. When I called him, he was in Fort Morgan, Colorado. He said he understood why I loved Colorado so much and contemplated staying for an extra day.

I went to bed early (before 2am which is super early for Las Vegas) because I was under the weather. I stayed in bed for eight hours yet only got about four and a half hours of sleep. That sucked. I had a weird dream that I was staying in a luxury hotel in Sydney. I had to ride a glass elevator to get to my room on the 72md floor. A fellow by the name of Conrad rode the elevator with me and he was terrified of heights. He's British and works for Poker Stars. I met him in Barcelona in September.

Change100 analyzed the dream withing thirty seconds of me telling it.

I've been giving music out at the WSOP this year. There's one guy that I met last year who is a floor manager. He's one of the suits working the floor. He saw my Steal Your Face hat and we struck up a conversation about my favorite band. He teased me when I told him I saw only 46 Dead shows. He saw over 300. But he's 10 years older and lived on the West Coast.

He lives in the Bay Area and is away from his wife and kids for two months while he worked the WSOP. I could sense that stress and loneliness. He said that he was jonesin' for some Jerry Garcia Band to lift his spirits. The next day I burned him a disc. He was super pumped.

"Anything you need, Pauly, anything... I'll do it for you!" he exclaimed.

I also gave Otis the same disc. He was very happy as he worked and listened. A couple of weeks ago, I hooked up JW, a fellow Spreadhead with the Vegoose show where Trey Anastasio came out and played two songs with Panic. Priceless.

I feel a little bit better today and I woke up starving. On Thursday, I ate a double cheeseburger at Sonic for lunch. For dinner I went with Change100 to Subway across the street from our apartment. I ordered the footlong tuna sub and contemplated getting Chipolte sauce on it.

The kid behind the counter couldn't have been more than 16. He called me "Sir." He also pointed out the daily deal and if I got it, the meal would have been cheaper by $4.