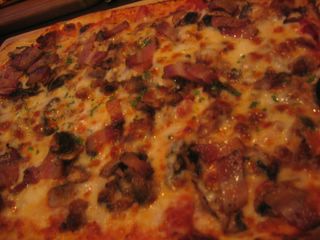 I live in Henderson which is a suburb of Las Vegas that's about 15-20 mins from the Strip without any traffic. I never thought I'd actually be happy to be living in a cookie cutter gated apartment complex smack in the heart of suburbia in between a slew of strip malls featuring fast food chains, but here I am... enjoying every second of it. The alternative was to live in the city of Las Vegas during the World Series of Poker. After last year's debacle at the Redneck Riveria, I was seeking out a quieter place that was not infested with crack whores and meth-heads.

I spent the past week living in a hotel room on the Strip. Although it was much closer to work, the internet access sucked and I missed sitting on my couch, ripping bingers, and writing. When I got home on Wednesday afternoon, I did just that. Over the past week, I did not find the time to write for 2-5 hours straight without any interruptions.

I also finally got 5-6 hours of sleep for the first time in a week. I had been pushing my body very hard over the past month partying and not sleeping. The fast-paced lifesyle finally caught up to me on Sunday night (actually early Monday morning) when I fell asleep at a Pai Gow poker table at the Excalibur. I wasn't wasted so I didn't pass out. I had not had more than 3 hours of sleep since Derek arrived in Las Vegas. My mind, body, and soul were exhausted. I'm gonna need a week or so to recoop.

Grubby leaves the apartment in one week and of course, I'm a little sad. We ate lunch with Change100 today at Balboa's in the Disctrict at Green Valley Ranch. Balboa's is a 24 hour gourment pizza joint. Grubby and I usually go there after he picks me up at the airport whenever I fly into Las Vegas. We had not done Balboa's since I got back. We drove over and I realized that I never went during the day... only at night.

I usually order the spicy sausage and mushroom pizza. They serve it in a rectangle and cut it up into eight sqaures about the size of a first generation iPod. This time I added bacon and extra cheese to my pizza. No wonder I've put on 10 pounds since I moved back to Las Vegas. The buffets have something to do with that. I told myself starting Thursday that I'm gonna eat healthier. Take for instance my trip to In & Out Burger with Change100, Spaceman, Mrs. Spaceman and Lydia on Tuesday. Not only did I get a doubles cheeseburger combo, I aslo added a single cheeseburger and a chocolate shake. Then for dinner I ate an entire big ass bowl of penne bolognese. Yes, I'm over-eating again and I need to stop since I do not anticipate any serious exercise over the next four weeks.

On Wednesday night, I ate dinner with Otis, Michalski, and Wil at the Tilted Kilt, a Scottish pub inside the Rio casino. I drank two pints of Stella and ate a chciken club sandwich with spicy cayenne pepper ranch dressing. The sauce was so hot that my bald spot was sweating.

I won a shitload of money and other stuff over the past few days. It started with Italy winning the World Cup on Sunday. Then on Tuesday night, I picked the American League in the All Star game, and my boys came from behind to win. Then on Wednesday I found out that I won Grubby's car in a prop bet. I said that Pirates of the Caribbean II would gross more than Spiderman. Grubby said that Spiderman wold retain it's record weekend gross. And guess what? Pirates 132M, Spiderman 114M. His 91 baby blue Geo Metro with 120K miles on it is mine!