The Yankees jumped out to a 1-0 series lead over the struggling Detroit Tigers after an 8-4 victory at the House that Ruth Built. By the time the Yankees took the field, Joe Speaker's A's picked off Drizz's Twins in Minnesota when Barry Zito outdueled Johan Santana. The Twins were supposed to be the Yankees first round match up, but the Tigers' record slipped during the last few days of the season. 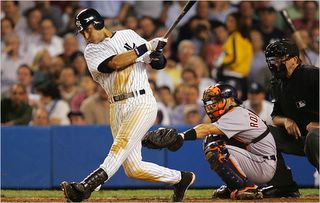 In a year that saw the Yankees starters plagued with injuries, Joe Torre's Game 1 lineup might end up being one of the toughest in the history of post-season baseball. Every single player at some time in their career was an MLB all-star. Even Robinson Cano who batted 9th finished 3rd in the AL batting race. Tigers manager Jim Leyland referred to the Yankees lineup as "Murderers Row and Cano."

Starting pitcher Nate Robertson only managed to squeak through the line up once before the Bronx Bombers pummeled him for five runs in the 3rd inning. Johnny Damon led off with a weak grounder in between first base. Robertson attempted to dive for the grounder and missed.

"I should have made a play on that," Robertson said. "If the leadoff guy gets on, especially with that guy, its huge. Everything started from there."

Jeter found himself in the hole against Robertson with an 0-2 count, until he worked it to 3-2. On a hit and run play, Jeter doubled in the gap which sent Damon to third. Bobby Abreu put on his Paul O'Neill playoffs mask and doubled home both runners. Abreu will be the Yankees X-factor in the playoffs and can fill the post-season void that they've been lacking every since O'Neill retired. Abreu's strength is his ability to take pitches and work a count in his favor. In the Bronx, he doesn't have the intense pressure on him to hit HRs like he had on him in Philly. The Yankees fans just want him to get on base and drive in runs. Game 1 marked his first return to the playoffs since 1997 and his big hit lifted the Yankees to a 2-0 lead.

Cleanup hitter Gary Sheffield laced an RBI single to right field, and then Jason Giambi jacked a two run dinger to right-center field when he tagged a fastball up in the zone to put the Yankees ahead 5-0. That's the most runs that Yankees scored in an inning in the playoffs since 2001.

Wang found himself in jams early on in the first two innings. Luckily his sinker bailed him out with a runner on third and only one out, whe he promptly induced a 6-4-3 double play to end the inning. Wang needed the 5-0 cushion because the Tigers fought back to put up three runs in the fifth inning.

Torre took Wang out a few batters two early especially since Mariano Rivera was limited to only one inning. Mike Myers gave up a solo HR to Curtis Granderson and Scott Proctor gave up two singles in the top of the 7th only to face Maglio Ordonez with runners on. Historically speaking, Proctor had done well against Ordonez in previous meetings and he won the most important battle as Ordonez flied out stranding two runners. Yankees fans exhaled a collective sigh of relief as their weakest link (the entire bullpen minus Rivera) passed a difficult test.

Derek Jeter capped off one of his best post-season performances with a solo HR to end up 5-5 for the night. Only five other players had five hits in a post-season game. Hideki Matsui was the last player to do it in 2001. Jeter rounded the bases as chants of "MVP! MVP!" echoed all over the stadium.

Before Mo Rivera came out to pitch the 9th, I had that calming feeling of confidence that I had not had in several years as a Yankees fan watching my team play in October. There was a time when you just had to get to the 7th inning with a lead and you knew that the Yankees would pull it out. I had a similar feeling last night after Proctor got Ordonez to fly out with runners on base. It's a simple formula that's tough to implement... score as many runs as you can, have your starter scatter a couple of runs, and let your bullpen shut down the opposition late in the game.

The Yankees have their eyes on another championship but the cannot overlook their first round match up. They are supposed to win Game 1 and Game 2 at home and are on track.

Random Thoughts... Can we just take Joe Buck behind the shed and beat him senseless already? That hardest part about watching the Yankees in the playoffs is listening to Joe Buck aka Bob Costas Lite... Rudy Guiliani was in his usual seat and a chubby (and dry) Patrick Ewing came over to shake his hand... Speaking of Patrick Ewing, I must say that Jason Giambi gets the Ewing Award for sweatiest NYC athlete. Just look at Giambi during his first AB tonight and you'll see what I mean. Giambi looks like he sits in a suana in between innings... The Cardinals took a 1-0 lead over the San Diego Padres who couldn't secure a Game 1 victory at home. At least I figured out where Mike Piazza ended up... The Big Hurt is on a mission and he has that ability to lift the A's over the Twins. At one point, he was the best player in the game and he showed flashes of his power hitting after jacking two HRs and one against Twins ace Johan Santana... Before the Mets first pitch for their Game 1, the Yankees and Derek Jeter have already stolen the media thunder. All eyes are on El Duque's calf/thigh/vagina this afternoon as they drew the mid-afternoon game against Nomahhhhh and the Hollyweird Dodgers.
by Pauly at 10/04/2006 08:18:00 AM