Zankou Baywatch and Malcom in the Middle Smokes Crack

It was still dark when I woke up the other morning. I had left my window open from the night before and the smacking sounds of the precipitation made me quickly read the weather report and check my flight status. Everything seemed to be on schedule but because of the rain, I decided not to go running on my last day in the city. Instead I read for about twenty minutes then wrote for the rest of the time. Because I skipped my morning run, I missed the dead bodies left over in Van Cortlandt Park after that gruesome double-murder suicide where a father shot himself in the head after he killed his wife and he put a bullet in the face of his four year old. That went down a couple a blocks away from my brother's apartment.

I was disappointed to find that my last banana suffered from serious bruising around 50% of the said fruit. I salvaged what I could and threw it in my Grape Nuts. I used to mix Grape Nuts with other cereals because gravel is hard to eat just by itself. Mixed with fruit helps but mixed with damaged fruit makes Grape Nuts blah. I ate about 63% of it and dumped the rest. I went downstairs and waited for my cab to pick me up and take me to the airport. My driver showed up four minutes late.

The traffic to JFK was light but the actually terminal was swamped. The security line was brutal and I had to stand in front of a guy wearing a Boston Red Sox cap who sighed and complained every fifteen seconds. That sucked. I wanted to punch him then I recalled what Buddha said about tolerance even with Sox fans.

The flight from JFK to Long Beach was delayed 15 minutes due to weather. I sat next to a weird looking chick with dark curly hair and thick Lisa Loeb glasses. She drank five cups of coffee and read a book about Heidegger. She didn't turn on her TV but occasionally glanced at what I watched. I freaked her out because after the first hour of Sportscenter, I watched four straight hours of the Vietnam War on the History Channel. The hour about the battle of Hue was insane.

Somewhere over North Dakota, curly haired girl put away her Heidegger book and broke out a Hebrew 101 workbook. She told me that she's learning Hebrew because her boyfriend is Israeli.

"You're reading a book by Heidegger. Don't you know he was a Nazi sympathizer?"

She shrugged her shoulders.

The suit in the aisle across from me read the NY Times, the Wall Street Journal, and USA Today. Then he broke out a copy of Newsweek or the Economist before he opened up a book.

My flight arrived in Long Beach twenty minutes late and it took almost forty minutes from the time I deplaned until the luggage arrived. Long Beach is a small airport with four gates and I dunno what the delay was all about. I estimated the over/under on my luggage creeping in front of me would be 8 minutes. It took 11 and I realized that 50% of all domestic airline passengers have the same crappy black suitcase.

Luckily Nicky was already at the airport when I finally picked up my bags. She had some medicinal marijuana waiting for me on our ride to LA. It was mid-afternoon and most of the traffic was coming the other way on the 405.

We headed to Zankou Chicken to grab a bite. For me, it was dinner time. We went to the one on Sepulveda in West LA instead of the location down on Sunset in East Hollywood. The new one was less crowded and much cleaner. As we walked through the parking lot of Zankou Chicken, a convertible Mercedes whizzed by us. Nicky muttered, "West LA douchebags!"

We got in line and ordered the #1 to go... a whole chicken with two pieces of pita bread and two garlic sauces. We also got some hummus. Total cost $12.74. Standing in line behind us was former Baywatch actress Traci Bingham. I had been in California less than an hour and I was stoned to the gourd and bumped into Baywatch alumni. I wondered if David Hasslehoff tapped that ass?

I knew Traci Bingham was on the fringes of the business but couldn't recall her name or where I saw her last. That's when Nicky reminded me that she was the first black lifeguard on Baywatch. I scanned my memory and remembered her as hostess of the Lingerie Bowl (models in underwearing playing football during halftime of the Super Bowl. Man, sometime I fucking love Hollyweird) a few years ago and she appeared on a lame D-list celebrity poker show with Joe Speaker's buddy Morris Chestnut.

Anyway, I checked Traci Bingham's imdb profile. She says that she's a vegetarian, but why would she be at Zankou chicken? And what was she doing riding around with a milk and cookies looking West LA docuhebag driving around in a Nazi sled? 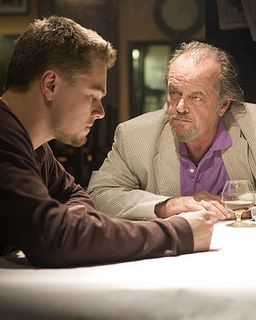 I've been a fan of Martin Scorsese ever since I first saw one of his movies. He's one of the reasons I wanted to be a filmmaker when I grow up. Films like Taxi Driver and Mean Streets captured gritty life in New York City in the 1970s which is was the era when I grew up. The city had a magical, yet dark vibe to it back in the crime ridden days when the city was flat broke and billions in debt. It was interesting to see Scorcese tackle two different subjects... the Irish mafia and Boston instead of his usual NYC goomba flicks.

The Departed moved swiftly for a 2.5 hour flick. I imagine that the director's cut would have been well over 3 hours. I told AlCantHang that The Departed would have been a magnificent HBO series spread out over a couple of seasons. That way you could expand several scenes into five-ten minutes instead of 45 second splices. At times, the dialogue was hearty and hysterical.

The Departed had a Goodfellas vibe, especially the scene when Leo DiCaprio fucks up the Italian mobsters from Providence in the corner bodega. He understands the thug and gangster life, but the Irish stuff seemed too broad. He should have consulted Ed Burns. He captured a different side of Boston that gets overlooked in the few films about that city.

The Departed is a flick that would have fizzled out if a different director was attached to it. I suspect that the high quality of actors in the flick were only there because it was a Scorsese film. That's the difference between a director/visionary making a film and a studio cranking out crap for cash.

And with any great Scorsese flick, the soundtrack was kick ass featuring some of my favorite bands like The Rolling Stones, The Allmans Brothers Band, Badfinger, and The Band covering Pink Floyd's Comfortably Numb with Van Morrison on vocals. The opening flashback scene with The Stones' Gimmie Shelter fading in and out set the tone of the film.

If you have never been to The Grove, there's a huge parking deck that is several stories high attached to it. You have to drive down a circular pathway in the middle of the deck to leave. On our way out after the movie, Nicky said, "Is that Frankie Muniz driving behind us in a Porsche?"

It was and when you're Malcolm in the Fuckin' Middle, you get to drive around the City of Angels in a pussy magnet like a Porsche. I wonder how much tail that little dipshit has turned down in the last few years?

I fantasized with the idea of trailing Frankie to find out he's going down to the hood near 7th and Alvarado to buy a couple hundred bucks worth of crack before he picks up a couple of strung meth addicts from the Sherman Oaks to take back to his house in the hills for a lubricated night cap.

* * * * *
This morning I woke up early and wrote for almost two hours before I went out on a morning walk through Beverly Hills Adjacent aka the slums of Beverly Hills. I liked walking down alleys and trying to see which house would be the best to rob. I wanted to go running but I'm afraid that crazy LA drivers would run me down. The walk was nice during the cool morning (for LA standards) and I did not miss the 50 degree wet and rainy weather of NYC.

After my shower, I walked into Showcase's bedroom where I could hear incessant laughter. He was showing Nicky a cooking show where the host Sandra Dee got dressed up like celebrities in anticipation of Halloween. She did Liza Minelli then came out as someone I had no idea who it was. They couldn't stop laughing at the impersonation and I stood utterly clueless.

"You don't know Barbara Striessand?" snapped Nicky as looks of astonishment fell onto their faces.