Velvet Sea was on the scene moments after it happen and has some pics of the building fire up on his blog. Take a peek. 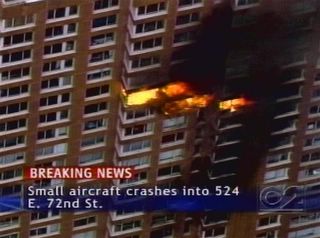 4:35pm... I was watching WCBS channel 2 in NYC and they said that the crash was not an act of terrorism. They did mention that the plane, a Cirrus 20 four seater, was registered and owned by NY Yankees pitcher Cory Lidle. No word on whether he was on the plane. It left Tetoboro Airport in NJ at 2:30pm and crashed into The Belaire at 524 E. 72nd Street on the corner of York Avenue. At least two people are dead and no word on whether one was Lidle. He does have a pilot's license.

4:40pm... I'm getting weird flashbacks of 9.11 and hearing about Yankees catcher Thurman Munson dying in a plane crash in the summer of 1979. I was six at the time.

4:53pm... There's a rumor that at least one member of the Yankees was on board, but no word on who yet. They increased the death toll to 4.

4:55pm... According to ESPN.com... Cory Lidle died in the plane crash. He planned on flying home. He was married and had a son. He was a lifetime 82-72 career pitcher. He made his debut with the Mets in 1997. He has played for seven different teams and was traded to the Yankees this season. 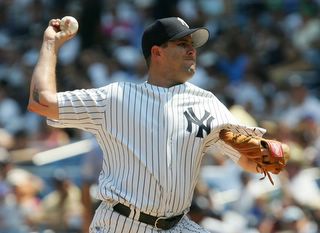