Here are some random gems that I came across this past week or were sent to me by friends. 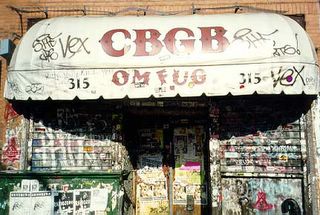 CBGB's is closed for good. (Breitbart) I've done my fare share of partying at that scum infested shithole over the last decade and a half. A few friends of mine had bands that played there over the years.

I recall one night when I walked in front of CBGB's on my way to Bowery Ballroom to see either Charlie Hunter or Robert Randolph play. I was with my friend Molly and a scrawny teenaged suburban kid with a bunch of tattoos and piercings stood in front smoking a cigarette. As we walked by he whispered, "Fuck you yuppie!"

I fired back, "I'd rather be a yuppie than a poseur like you."

A real punk rocker would have bashed me in the head with a Mickey's bottle first before he said anything. I should have head-butted him and stolen his shoes. Instead, Molly and I walked away laughing at the loser.

* * * * *
Rich People Live in the Upper East Side. (Gawker) No shit, really? I think the jackoffs at Gawker just posted that to kiss up to a bunch of blue blood inbred society freaks.

Wow, two Rachel Ray links in consecutive weeks... Rachel Ray My Dinner Hooker. (Salon) She cooked a pound of bacon and crunchy French Toast the other day and I nearly jizzed in my pants.

I wrote about The Killers Daily Booze Schedule over at Las Vegas Blog, how The Killers have some random items on their backstage rider. (Smoking Gun) They specifically request different booze depending on the day of the week, like Maker's Mark & Absolut Vodka on Monday, Wednesday, and Fridays and request Jack Daniels and Gin on Tuesdays, Thursdays, and Saturdays, and on Sundays they slow down and drink Jameson and tequila.

Online Gambling Ban Won't Work. (MSNBC) I sorta agree but I wished the folks who dropped me or made me take a pay cut saw that article!

Japanese man's blog makes his demon-wife a media-star and instant celebrity. (AZ Central) Six years ago he started a blog where he vented about some of the crazy things his wife did. Now, she's..."the star of a book, a television drama, a comic-book serialization, a videogame and, coming soon, a movie."

The Tao of Pauly's Dipshit of the Week goes to a New Mexico woman who tired to smuggle in heroin (in a hypodermic needle) in a Taco Bell burrito into prison. (Smoking Gun) In unrelated news,Taco Bell just announced their newest product... China White Chalupa Surprise.

In Sports News, the NY Knicks won their pre-season opener in Isaiah Thomas' debut as head coach. (NY Times) Guess what? They still suck. It's gonna be a long season.

A-Rod's private plane skidded off a runway in California. (NY Daily News) I heard he shit his pants.

And Malawi is trying to block Madonna's adoption of a baby boy. (Yahoo) And the baby's real father was powerless to stop the Material Girl from taking away his son. (Daily Mail)

In case you didn't know, Google bought You Tube (Reuters) earlier this week for $1.65 million in Google stock. Lucky fuckers. Here are four random You Tube videos of the week.

This makes my Top 10 all time... Tootie's Bong. From a classic episode of Facts of Life when Tootie and Natalie buy bongs for Mrs. Garrett. My favorite line... "We're a three bong family."

In case you missed Trey Anastasio Band perform Dragonfly on the Late Show with David Letterman, now you can see it thanks to You Tube.

The Joker showed me this video a few weeks ago... What if George Bush Were a Jedi?

BTreotch sent me a video of STS9 and Joseph the Broseph that he made.