Here are some interesting things that I stumbled across or friends email to me over the past week.

Mui posted this gem... Victoria Beckham and Katie Holmes Glam It Up (A Socialite's Life). Yes, it's true. I mentioned last week how Katie is slated to play Posh Spice in a feature film. These days Katie and Posh look like they are BFF! 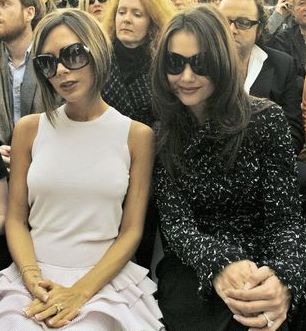 Michalski sent me this article Blogger book craze could fizzle from overkill (Yahoo News) which covers bloggers who got book deals based on their blog and how the majority are not selling. That's a not shocker. There's a reason for the sluggish sales... blogging is not writing. A lot of folks who have blogs and post stuff all of a sudden think they are writers especially the trend-happy publishing houses who gave them fat advances.

Buck O'Neil the legendary baseball player in the Negro Leagues passed away (NY Times) this week. He hit .350 in 1946 after coming back from serving in the Navy during WII.

The Oil Conspiracy... Is the Bush administration manipulating oil prices to win elections? (Slate) is a must read.

Security barriers of New York Are Removed (NY Times) discusses how all of those gaudy concrete barriers placed in front of landmarks and buildings are going to be taken away... almost five years after 9.11. Even if a terrorist drove a truck packed with explosives into the lobby of a building, the barriers would not prevent the attack. Besides, it seems New Yorks have been using the barriers for ashtrays during smoke breaks.

Outspoken Russian journalist Anna Politkovskaya was whacked (Reuters) the other day. She had been openly critical of the Russian government especially Putin's stance on Chechnya. According to her editor, she was working on a story on torture and abductions in Chechnya when she was slain. When I read stories about this I'm relieved that things are still kosher in America... I can say what I want on my blog without worrying about someone hiring a contract killer to snuff me out. This also demonstrates how dangerous journalist jobs are in most of the world where free speech is an ideal and not a reality. Here are some other related links: Slain Reporter Was Writing Torture Story (My Way) and Death of a Woman Who Shamed Moscow (UK Times).

Elephants are on a rampage attacking villages! (NY Times)

No More Excuses for Torre (NY Daily News) is an article written by Mike Lupica here he takes the NY Yankees manager behind the shed and let's him have it. Rumor has it that Sweet Lou Pinella is on deck to take control of the Yankees. He's no Isiah Thomas... but who is?

In Defense of Rachel Ray... Why food snobs should quit picking on her (Slate) is a great read especially for someone like me who is a closet Rachel Ray fan. The reason the food snobs and chefs don't like her is exactly why I love watching her show 30 Minute Meals. I can actually make the dishes she's talking about versus the elegant high end meals that friends of mine who went to the C.I.A. have a tough tine preparing. Here's a snippet:

"Unlike most celebrated chefs, Ray seems to have spent more time in supermarkets than cooking in restaurant kitchens. She started out working the candy counter at Macy's Marketplace in New York and then managed the fresh foods department there; later she became a manager and buyer for Manhattan grocer Agata & Valentina. That's probably why she's so good at adapting gastronomy for the masses: She knows how real people shop and eat."

In TV news... I'm Aaron Sorkin and You're Not... The knowing charms of Studio 60 (Slate) discusses one of my new favorite shows. By the way, the third episode "Focus Group" was not as strong as the first two but I still watched it anyway. Let's be honest, I'd give my left nut to be a staff writer on a Sorkin show.

If you don't read my poker blog, then you should check out Prison Tips for Online Poker Players (Tao of Poker) which was a not-so-serious reaction to the recent Internet Prohibition and Gambling Act.

And here are a couple of You Tube videos you should kill some time with:

The Joker posted an amazing video of the Aspen foliage featuring pictures taken by himself and Edyn which includes a tune from Jeff Tweedy.

Ah, this is a classic! Check out the video below of a backstage clip from the Phish documentary Bittersweet Motel when Trey sings a song he made up on the spot called "Page's New Shirt."

This is one of my all time favorites... The Grateful Dead appear on Playboy After Dark in 1970 when they performed a few songs in Hugh Hefner's Chicago penthouse. The roadies dosed everyone at that party. Even Hef was tripping on liquid sunshine that night. Good to see a young Jerry with black hair and a funky poncho.