The kittens come out at random times. A few weeks ago, a stray litter of feral kittens were born somewhere in the adjacent alley to Nicky's apartment. The tiny adorable furballs rummage through the dumpster looking for food, small rodents, and bugs to feast on and Nicky has fed the saucers of milk from time to time. They are an extremely shy bunch and dart away as soon as make a single motion towards them. 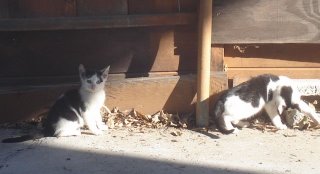 The cellphone reception in Nicky's apartment in mostly average with some horrible spots. I usually made calls in the alley using the long narrow space to pace back and forth. While on one call to Jerry on Sunday morning, I looked up and saw one kitten pop its head out of the dumpster, which overflows on the weekends. I took a step forth and she jumped out and ran off underneath a hole in the wooden fence.

In the mornings I sit at the dining room table and write with my back to the window that faces the alley. I occasionally look out of the window while I let sentences unfold in my head before I type them out. That's when the kittens play around the most... early in the morning while I write.

On late Saturday morning, we went to Nick's for breakfast. I ate a bacon, egg, and cheese sandwich on wheat toast with hash browns. I'm addicted to that combination. The staff at Nick's is always happy to see us because I tip them well.

"Most of these LA douchebags are too self-involved," commented Nicky. "And they're too cheap to tip."

Those are the types of people who will piss away a couple hundred dollars on a pair of jeans and have no qualms about stiffing waitresses. Plus everyone else in this town is cash poor and struggling writers and actors don't tip big out of self-preservation. It's good to be missed in two different diners in LA and in NYC like the Greek guys in Riverdale who put salt, pepper, and ketchup on every kind of sandwich.

On Saturday afternoon, we went up Pacific Coast Highway for a drive past Malibu and Zuma Beach over into Ventura County before we turned around and headed back into the city. There was a sinkhole on the southbound lane on PCH due to a watermain break and that jammed up traffic for a bit as construction crews raced to fix the hole.

I watched the end of UCLA's upset of USC before going out to dinner at El Cholo, a Mexican joint in Koreatown that has been an LA standard for over seventy years. I ordered two Coronas, the Dorado Burrito (a beef chili burrito) and a quesadilla with Black Creek cheddar and Jack cheeses. I was friggin' hungry and ate almost everything (minus he veggies). Nicky ordered a Margarita and Tres Tacos al Carbon. Yes, those tacos had bacon in them.

El Cholo was filled with plenty of snooty USC fans on their way back home from the game. On our way out, a tipsy Nicky taunted a few and shouted, "Go Bruins!"

* * * * *
I woke up at 6am on Sunday and couldn't fall back asleep. I went out to the dining room table and checked flights to Florida in March and discovered $99 one-way fares to and from LaGuardia to Ft. Lauderdale. Instead of waiting 24 hours which I try to do before any major online purchases (especially travel), I seized the opportunity to cash in on a sweet deal. The flight cost me $220 in all. I had a coupon for free roundtrip flight but decided to use that on a more expensive flight like NYC to LA. Actually, I've flown so much on JetBlue in the last twelve months, that I'm approaching my third free flight on JetBlue. That's my airline of choice and I don't fly any other airline if I'm going out to LA or Las Vegas. Luckily they have gates in Florida and I can get more points with my recent purchase.

JetBlue awards their frequent fliers free flights when you reach 100 TrueBlue points. Long flights are 12 points each way. That means you need at least four round trip cross-country flights, plus one more smaller flight to get a free roundtripper. Not too shabby for someone like me since I criss cross the country a dozen a times a year.

Last December, I had 110 points and earned a coupon, but had to use my free flight to go home to NYC for my grandmother's funeral since I was on the West Coast when she passed away. By Memorial Day of this year, I racked up 100 more points after four more cast-to-coast flights. And after I complete my flight back to NYC in two weeks, I'll be eligible for my second free roundtrip flight (third inside of 12 months) to anywhere that JetBlue flies.

After I booked my flight, I sat down and wrote for two hours. I touched up one article for a Monday deadline and mailed it to my editor... one day early. I did that twice this week and shouldn't get into a habit of turning in work early because then that's what will be expected of me. I usually turn stuff in a few hours before deadline.

One of the kittens scurried out from underneath the fence and walked back and forth as I wrote about the purplish hues of the Hollywood Hills that reflected through the smog-ridden sunset as Nicky and I drove back into the city after our drive to Malibu.