I've boarded JetBlue flights almost 20 different times in 2006. I flew them so much in the last 13 months that I've accumulated 3 free round flight trips from TrueBlue, their Frequent Flier program. Usually I need four round trip flights from NYC to the West Coast, plus one other flight to qualify for a freebie. After my latest flight to California, I'm 12% closer to getting another one. JetBlue allows you stack up your free flights (although they expire one year from issue), so I got four one-way or two roundtrippers in the bank. I'm going to use one of the one-way coupons to fly from LA to NYC after I get back from Australia in early February. 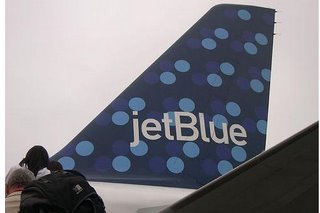 Sometimes JetBlue's flights are so cheap (particularly to Las Vegas) that I don't want to use my free trips since the total flight is a bargain at under $250 round trip. That's what happened when I went to book flights to Florida in March. The rates were so cheap at $99 one-way that I would have been foolish to use my free flights on lower end fares. It's the NYC-LA legs that cost the most and I'll try to save the freebies for future trips in 2007. If I book anything that is under $150 for a one-way leg, then I feel I'm not getting my money's worth.

I've used JetBlue more than any other in the last few years and it's my favorite airline of all time. The planes are clean. The staff is friendly and positive. They have an amazing online site where you can pick your seats and print up your boarding pass. Flights are usually on time and they fly routes to the two places I spent my most time in 2006... Las Vegas and Los Angeles. And they have free TVs. There are no meals, but plenty of snacks. My only complaint is that they cut back on the second snack on the cross country flights. They now give you a bag of Sun Chips when they used to give you a snack pack filled with a cookie, crackers, cheese, and a mint.

Delta and Continental were solid airlines in the early 1990s when I flew those exclusively to and from school. When I moved out to the West Coast to Seattle, I discovered Alaskan Air which was very solid. Since 2001, the majors like Delta, Continental, and United lost their accolades for top notch service after they ran into financial problems and had to pay their workers jack shit in order to boost revenue. Any decent fares went down the crapper pretty quick.

Thank God for JetBlue who stepped up to the plate soon after. Not only did they offer the cheapest rates around, they stood out from the pack of low budget airlines like ATA, Frontier, and the now-defunct National Airlines and EasyJet. In the late 1990s, an Easy Jet plane crashed in the Florida Everglades. No bodies were recovered because alligators gobbled up all the dead bodies, but left the black box in tact. A few weeks after that crash, Senor and I flew to New Orleans for Jazzfest on EasyJet.

Nicky and I flew to Amsterdam on Continental and it was average but still lacks behind the high quality of service of KLM/Royal Dutch Airlines that I flew to Europe in 2005. You can't beat those hot Dutch stewardesses and all the free ice cream. I flew on Frontier a few instances to/from Colorado. The cost of a ticket was low but you do get what you pay for... crappy service and long lines to check in at the counter.

In 2006, I also took flights on American Airlines, Untied, AmericaWest, and Southwest. None of them compare to JetBlue. My biggest concern is that as they keep expanding, their quality of service decreases. Southwest was JetBlue in the 1990s and has slipped in recent years.

When I fly on JetBlue, I always choose an aisle seat about 2/3 into the plane near the back. I don't want to be too close to the toilets, but prefer flying in the rear of the plane on flights to Las Vegas and Long Beach because you are the first group on the plane (which means ample room for your carry on bag) and they deplane from both the front and the rear at McCarran Airport in Las Vegas and at Long Beach Airport.

I changed my flight at the last minute to arrive into the LA area a day earlier after I found out I had to fly to Australia a day earlier. Jet Blue's fleet are Airbus320's which has 30 rows of six seats. My flight was nearly full, with the only available seats a few middle seats and one window seat near the back which I took it because I had no choice.

My flight from JFK to Long Beach was one of the worst of 2006 all because of that fuckin' seat. And why? A crying baby.

Thank God it was my last flight of 2006. I know that as a frequent traveler (and rider of the NYC subway system) is that you have no choice over who you sit near or next to. Usually crying babies don't bother me but this was the worst that I've ever experienced.

I had on headphones listening to the DirectTV at the highest volume and the kid could not stop crying. He did not sleep during the flight and wailed for at least five hours of the five hour and twenty minute flight. Somewhere over West Virginia I went to the bathroom and on my way out, I mentioned something to the flight attendant standing at her station in the back getting ready to start the drink service. I knew that she'd tell me that she couldn't help me but I had to say something.

"Hey, I'm having a problem and maybe you can help me out," I said to the cute stewardess who looked like Reese Witherspoon. "I've flown JetBlue almost 20 times this year. I racked up two free flights since May and I fly JFK to Long Beach all the time. I've sat next to fat people. Smelly people. People who couldn't stop talking to me. People with bad breath. Unruly kids. People who ate foul food. People who kept falling asleep on me. People who hogged the entire arm rest. People who took off their shoes and exposed their malodorous feet. I even sat next to a stripper when I flew to Las Vegas once. But right now I'm having the flight from hell."

"The baby?" she said as if she could read my mind.

She explained that there was very little she could do with that, like I expected her to say. Reese look-a-like apologized and suggested that I write a letter to JetBlue and perhaps they would offer me a discount on a future flight. I guess she liked the way I approached her... sort of humorous and disarming instead of caustic and demanding because she offered me a free drink.

"Do you have baby repellent back there too?" I said.

"I wish," she smirked then winked at me as she handed me a free Heineken on the house.

A young Asian woman with Lisa Loeb glasses sat next to me thumbing through several bridal magazines. I picked up one tip... wear comfortable shoes because you will be standing on your feet all day. The baby irked her too because she kept making faces everytime thirty seconds of silence was replaced by screaming.

There's one thing I found out the hard way... and that's telling people how to raise their children. When I was a security guard at the Metropolitan Museum of Art, I said something to a mother who could not keep her baby from crying in the Impressionist Painting gallery. She scolded me and told me that I shouldn't judge her motherhood on the crying baby.