Couldn't sleep. What else is new? 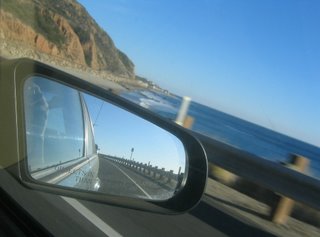 I was writing by 5am. Nothing special. Just thoughts and an outline for a high concept film that I'd like to write a year from now if I can find the time.

No sign of the kittens. The alley is quiet and empty. Nicky left out some scraps from dinner last night for the kittens but it's not there anymore. And dinner last night was... Zankou Chicken. For $10 you get a whole fuckin' chicken with extra pita bread and garlic sauce. Best deal in Hollyweird.

Showcase left for the airport at 5:20am. He's going to NY for the Jewish holidays via JetBlue. His girlfriend woke up at 6:30am to go to work. She's in the film industry and does pre-production on a sequel to a movie that I'm embarrassed to say that I've seen the original. I should be shot.

The only time I see movies in the theatre are in cities like Las Vegas or in LA. I've seen two flicks since Monday... Bobby and Fast Food Nation. Both are depressing but I had a few laughs along the way. Emilio Estevez directed Bobby while one of my favorite directors, Richard Linklater, spearheaded Fast Food Nation, the film version of Eric Schlosser's book of the same title. Both flicks feature cameos from several big stars and had violent and depressing endings. Bobby Kennedy got whacked at the end of Bobby and you eventually see the killing floor of a slaughterhouse at the end of Fast Food Nation. I'd write two reviews, but I'm pressed for time.

Leaving for Vegas soon, that is as soon as Nicky wakes up we'll pick up the rental car, then load it up before driving to Las Vegas. I'll be there for a week hanging out with my brother and other friends and bloggers before we drive back to LA.

Last year at his time, my head was in a bad spot. My grandmother had just passed away and I was burnt out after six months of non-stop work and travel. I hated myself. I hated Las Vegas. I hated my writing. I hated losing at cards. And I hated everything poker. I'm shocked that I made it out of Las Vegas alive last December even though I had a mini-breakdown shortly after the bloggers left town. That dark cloud of depression hit me hard. And being down in Vegas is hard to overcome.

It's good to know that I'm in a much better head space this time around with regard to my writing, my career, and my relationships with friends and family. Indeed, this trip to Las Vegas is a true celebration of what I (and many other friends of mine) have accomplished in the last few years.

I met Wheaton for dinner on Monday. He's not gong to Vegas, so I made an effort to see him while I was in town. Nicky drove me out to Glendale so we could check out Damon's Steakhouse which is a tiki themed eatery that's been around for over 70 years. The have a weird house dressing for their salads and their garlic bread is pretty kick ass. The filet was better than average but their double-baked baked potatoes were the shit. I spent almost everyday this summer hanging out with Wheaton, so you can say I needed my Wheatie fix.

After dinner with Wheaton, we headed back to the apartment and watched Heroes and Studio 60 via TiVo. Showcase mentioned that he once did a scene with Hiro (the actor's real name is Masi Oka) a few years ago. They both had small bits in Legally Blonde 2 as congressional interns. And now Hiro is big time due to the success of Heroes.

On Tuesday morning, I woke up early to write and eventually went to breakfast at John O'Graots across from the Fox lot on Pico. That's where they serve the best French Toast and bacon in all of California. I came in my pants three times during the consumption of bacon. Daddy would have been proud.

On Tuesday afternoon, I ran a few errands including going to the drug store to stock up on Motrin. In California, they sell hard liquor in supermarkets and in drug stores so I wasn't shocked to see a bottle of SoCo on sale for $8.99. I bought it for AlCantHang to use as his personal "bathroom" bottle in Las Vegas. He ordered me to crack it open and do a dial-a-shot with him and BigMike last night. He also said, "You better have that bottle empty by the time I get to Vegas!"