Nicky made Showcase and I an amazing breakfast (crispy bacon & cheesy eggs with toasted baguette slices) on a lazy Sunday morning as I watched the San Diego Chargers game and kept an eye on the Jets game online. The best part about football season on the West Coast is that you wake up at 9am to watch the pre-game stuff and by 4:30pm, all but two of the games are done. 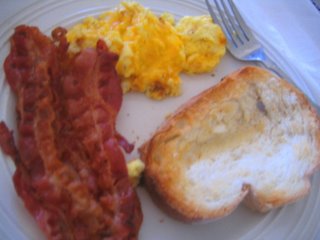 The Jets put an ass whooping on the Green Bay Packers as I got to flip back and forth between the Chargers-Bills game and the New Orleans-San Francisco game. The Chargers game was blah, but the N'arlins game featured some excitement as Reggie Bush rushed for 4 TDs.

Showcase eventually motivated to go to the medicinal marijuana smoke shop and returned with a paper bag filled with some of the finest herbs in Southern California. Nicky and I smoked strains like Buddha's Sister and NYC Diesel in Amsterdam and Showcase was able to get us some of those delicious nuggets along with other tasty favorites such as Sensi Star and Chem Dawg. For non-pot smokers and wine connoisseurs, what we got to feast on would be the equivalent of buying ten out of the top twenty best bottles of wines in the world and getting to drink glass after glass after glass.

Showcase's girlfriend Tina came over and I took everyone out to Sunday dinner. Nicky suggested Zen Grill, which is an Asian fusion restaurant with both plenty of sushi and Thai dishes. Zen Grill was tiny with only a few tables and the workers were adorable Asian women who barely spoke English. But the food was excellent and the dishes were moderately priced.

I drank Kirin and for my appetizer, I ordered the minced chicken in lettuce cups which was served in Zen's famous hoisen sauce. Showcase ordered the table chicken satay and albacore sashimi with sprinkled roasted garlic. Those were super spicy. My main dish was the Mongolian Chicken served in a mini-wok with white and green onions, garlic, and a spicy Zen sauce with Jasmine rice. Nicky ordered an aromatic dish called the Thai Green Curry.

I couldn't sleep and woke up early on Monday to write and watched the kittens in the alley. I greeted Tina and Showcase when they woke up to start the work day. Tina had jury duty and was not looking forward to that ordeal while Showcase headed to a temp assignment in an office building on Wilshire Blvd. We waked and baked. Everyone in Hollyweird gets high before they start the day. Whether its coffee, cocaine, yoga, or jogging... folks got high before they have to drive around in their metal coffins for the remainder of the day shielding them from constant sun and smog.

While I wrote, Nicky picked up a croissants at Yum Yum on La Cienega, which has some of the best 24 hour donuts in LA. I was supposed to meet Wheaton for lunch at a cafe in Pasadena but he had to cancel because the cable guy was coming over. We rescheduled for dinner which left my afternoon free.

Nicky and I drove over to the Grove for a quick bite in the Farmer's Market at the Italian joint all the way in the back by the Gumbo place. They have the best chicken parmesan paninis in LA for $8.50. They take a while to make, but it's worth it.

I needed a pair of jeans and sheepishly mentioned to Nicky about going shopping at some point during my time in LA. She got very excited, which most chicks do when they hear the words "shopping." She suggested three or four stores in the Grove but I knew that I'd buy something at the first (and only) store I'd walk into. I hate shopping with a passion but my two other pairs of jeans didn't fit anymore after I dropped 20+ pounds. Nicky convinced me that I should open up the wallet to get a few nice items instead of gambling my cash away at the poker tables or in the stock market buying dogshit stocks like Brasil Telecom.

She eyed Lucky Jeans and as soon I took a step inside, a young mousey blonde salesperson nearly attacked me. "Can I help you today?"

I just pointed at Nicky and let the chicks discuss my situation. She pointed to a wall of jeans as I just sighed. Nicky picked up five different pairs and I headed to the dressing room. I liked the first pair I tried on and ended up getting that design. In and out in less than 15 minutes. That's how I shop. A different girl at the cash register rang me up and the exotic-looking dark haired waif started hitting on me. In front of Nicky.

Without blinking she said, "Cool. Good to see you're getting your work done."

"I should kick her ass!" Nicky joked as we walked out.

It's one thing if she said that before I bought the clothes, but she was flirting post-sale with a guy who forked over $100 for a pair of hipster jeans. Nice straight rich guys are hard to come by in Hollyweird. But she doesn't know that although I'm cash rich today, I'll be broke in a year, two max.
by Pauly at 12/05/2006 01:39:00 PM