My cell phone rang at 10:30am on Friday. As I picked it up, I couldn't recall the last hour or so from the night before. I didn't even remember going to bed, let alone the cab ride home. I looked at the caller ID on front of my cell. It read, "The Rooster."

I picked up and barely slurred, "Hello." 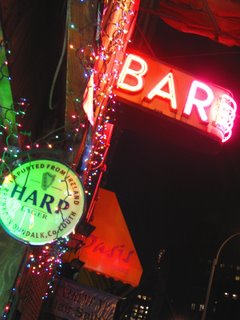 "Barely. And that Ethan Hawke muthafucker is a short mofo. He's shorter than me, Pauly Drama!"

That's when the events from a few hours earlier slowly came back to me as I woke up still drunk from the night before. I was sweating vodka and I almost puked at the smell of my own breath with the sweaty vodka aroma.

On Thursday night, I went out to eat with Derek, The Rooster, and F Train at Big Nick's Burgers. We chowed down on their tasty garlic bread and fatty Angus burgers cooked on Texas Toast with grilled onions and mushrooms and topped with Swiss cheese and bacon. We went barhopping afterwards to celebrate the end of a long year for all of us. When we were in Vegas together two weeknd before and made plans to hang out one last time before I left NYC to go to California before I fly down to Australia for a month.

Derek bailed around Midnight after we hit our fifth bar of the night as we followed The Rooster in and out of several bars on Amsterdam Avenue. We hopped from a yuppie bar, to a hipster bar, to a Columbia bar, and back to a yuppie bar. F Train left one bar after Derek left. That's where I met a twenty-something actress sitting at the bar. She was attractive, sort of a Tara Reid meets Claire Danes.The Rooster bought her a drink and when she said she was from LA, I knew it was time to fuck with her.

"I live in LA too," I said. "Beverly Hills. Olympic and La Cienega. How about you?"

Her eyes perked up as she said, "West Hollywood."

"Do any work recently?"

"I just shot a commercial for Purina."

"Yeah, I love animals too."

"Who are you represented by?"

"Buckwald," she said as she sipped on her fruity drink.

"Buckwald? They're a bunch of C-Listers," interjected The Rooster.

Offended, the Hollyweird blonde began to defend her agency.

"We all can't be represented by CAA," I added.

"You've got CAA?" she asked but never let me answer. "What do you do?"

"I'm a writer," I answered in the only truthful thing I'd say during our four minute conversation.

"I've done some TV work. I know it's embarrassing, but it pays the bills."

"Sorkin's show? Yeah. I've seen it. I auditioned for one of the principles," she said.

"Sweet. How did you land that?"

"I was in rehab with Sorkin," I said as I knocked back the rest of my drink. "I scored him some mushrooms and the rest was history."

The Rooster and I left and walked to another bar. Then another. We'd pop in and out. Sometimes getting a drink. Sometimes not. The Rooster was scouting for bitches (I still have a theory that he's a pimp and he's checking up on his working girls) and if there was a good ratio of The Rooster:bitches, we'd stay at that particular bar.

"We're going in here," said The Rooster as he ran down the steps and disappeared into a sea of J Crew models.

The space was tiny and crowded, but lit very well. As I sat down at the bar adorned in white blinking Christmas lights, The Rooster made idle chat with the ladies around us. When a hot blonde bartender asked us for our drinks, The Rooster quickly answered, "A Jack and Coke for me. A Screwdriver for Pauly Drama. And your phone number."

She smiled and said, "I've never heard that one before."

"You've never heard of a screwdriver?" I added. "Where the fuck are you from Iowa?"

I looked around the bar and realized that everyone was dressed up extremely nice. Too nice. The room reminded me of a bunch of LA douchebags. That's the vibe I got even though in NYC, people tend to dress up a lot when they go out or they are coming from work. The crowd in this bar was dressed for the occasion. A special occasion, I noted. Company party? Nah... everyone looked to pretty. But it looked like a private party. People were ordering drinks and not paying.

Ethan Hawke stood up from a table behind me. He had not shaved in weeks and looked like he just got out of bed. I noticed another guy who looked like an actor Josh Hamilton. A very drunk girl in a red polka dot dress held a plastic cup filled with Goldfish. She handed one to Ethan, then she handed one each to me and The Rooster.

I ordered three shots of Jagermesiter which was fitting since we crashed Ethan's Christmas party. I wanted him to have a conversation the next day that began, "Everything was great until I started shooting Jager with The Rooster. He's one cagey mofo."

I handed one shot of Jager to Ethan and the other to The Rooster. Then things got blurry. A second bartender came over five minutes later and told The Rooster and I that we'd could finish our drinks, but when we were done we had to leave since it was a private function. He meant to tell us twenty minutes earlier when we walked in. I knew that we were crashing a private party. I didn't realize that it was Ethan's Christmas party. I obliged but The Rooster took offense to us being asked to leave.

"You're kicking me out because I'm Mexican, right?"

The bartender had a blank stare and didn't know what to say.

"See this is the bullshit and discrimination I have to put up with all the time. This bar doesn't serve Mexicans. Total bullshit."

They handed The Rooster his tab and credit card slip and he whispered to me that he wasn't going to tip. He stiffed the bartenders after they asked us to leave. I stumbled outside and began to piss around the corner against one of their side doors. I looked at a text message I got from Otis.

"Ask Ethan if he can get me Winona's number."

When I was done with my public display of urination, The Rooster stood in front of Fred's with Ethan Hawke who smoked a cigarette. That's when I yelled out, "Yo Ethan, who's better in the sack? Winona or Uma?"

He didn't look at me. Instead, he took one final drag of his butt and then flicked it into the street. He went back down the stairs and into the bar. That's when The Rooster and the owner started to have words.

"You got me kicked out because I'm Mexican, right? I bet you hate Tony Romo too."

"I kicked you out because you're short and fat," the owner said.

"You talk a lot of shit, why don't you step over here and we'll discuss this like men," yelled The Rooster.

The owner was intimidated but he figured The Rooster was just talking smack. He didn't come out to the middle of the sidewalk and stood at the top of the stairs jawing back. He knew if The Rooster made a move at him, he'd have enough time to scurry down the stairs and into the bar.That's when the Rooster unleashed a verbal tirade at the guy trying to egg him into a fight.

That was by far the funniest thing I can recall The Rooster yelling at the guy who's only comeback was his standard, "Go drink somewhere else where they serve short fat guys."

"Your momma loved my cock in her mouth. Especially after I put it in your sister's ass," The Rooster screamed as we crossed the street and wandered into the ninth or tenth bar of the evening.
by Pauly at 12/23/2006 06:24:00 AM