I needed something to decompress with after the Super Bowl so I wouldn't have to think about the money I had lost. Instead of over-analyzing what went wrong and spending the night on mega-tilt, I invested almost 12 hours into the new series House of Cards, which has nothing to do with gambling, unless you consider politics as part of the "gambling" genre. Kevin Spacey plays Frank Underwood a sleazy Southern politician. He has a southern twang most of the time1, but it gets more pronounced during his Richard III inspired soliloquies about the corruptibility of men in power and gross incompetence at the highest levels of government. Spacey's wife is played by Robin Wright Penn, and she's the equivalent of the ice queen Lady Macbeth. 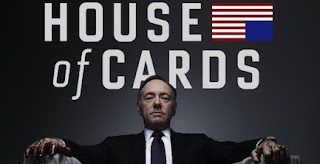 I polished off the series in one long 24-hour bender. It's like buying an 8-ball of cocaine and not leaving the house until its done. Actually if you snort an entire 8-ball, you'll be so paranoid I doubt you'd want to leave your house and probably spend the rest of your high throwing lit firecrackers around your living room.

House of Cards with its $100 million budget was created specifically for Netflix's streaming viewers. It was released all at once on Friday. All 13 episodes (roughly 50 minutes each). I waited until the Super Bowl ended on Sunday night to watch the first three episodes with Nicky. She crashed and I was wide awake so I watched a couple more. When I woke up, I watched another. I waited a few hours until Nicky woke up and caught up before we watched a couple more together. But then she had some other stuff to do and I was a full blown junkie. I just had to finish it off and get that monkey off my back, so I went into my office and polished off the remainder of the series after dinner. I'm an addict, but a dedicated addict. I finished House of Cards approximately 24 hours after I started it and spent almost half that time streaming 13 episodes/chapters.

I'm not much a TV person anymore. As a child of the 70s, I grew up on TV and we're talking old school network TV pre-cable. Three major networks. A couple of local stations in NYC like WPIX (channel 11) and WWOR (channel 9). And of course the bastion of learning... PBS. Beggars couldn't be choosey, so I watched a lot of bad TV (with some good moments here and there) and plenty of old movies (edited for TV). We had a VCR but I had to ask friends and relatives to tape movies for me on HBO and I slowly built up a library of random early 80s movies (like War Games, Real Genius, St. Elmo's Fire, and Raiders of the Lost Ark). I didn't have access to cable until college, but I spent a significant amount of my 20s sitting in the dark on a couch with a bong and mesmerized by the blue-green-grey glow of late night offerings on the boob tube. These were the golden days before the  dot.com boom when very few people had access to high speed internet, so cable TV was the dominant black hole of time and popular culture.

In 2013, I watch a ton of sports but only have a small handful of shows that I religiously follow (e.g. Mad Men, Homeland). The rest is just waiting around to watch a good episode of Hoarders or Intervention, usually after Nicky tells me the DVR recorded a new episode. Yeah, those reality shows are a window into the fucked up world of fucked up people. It's like rubbernecking on the freeway, and instead of an accident, it's some poor old woman's kitchen covered in empty dog food cans and mountains and piles of shit.

The recent introduction of "on demand" services (whether it's cable, or Netflix, Amazon, etc) revolutionized series viewing. You don't have to fight to capture an audience's attention at a specific time, but you have to be interesting enough that they'll want to set aside some of their other free time to devote to a new series, or an older popular series they missed yet all their friends raved about (e.g. Lost for me). You can catch up with a full season during a weekend bender and watch shows in four and five hour chunks. Essentially that's what happened with House of Cards...  hard-core viewers spaced out 13 episodes over the weekend (especially non-football fans) so by the time Monday morning rolled around, they had seen it all.

The first time I ever binged on a TV show? Mad Men. During the start of season three, Nicky and Showcase insisted I watch Mad Men, but I felt kinda of lost starting at season three. I didn't want to be left out and needed a crash course. I streamed season one inside of a weekend during a serious hashish bender and sunk into the couch. When I finished, I ordered season two and knocked that off stretched out of three days. Within two weeks I had caught up and could watch the new shows as they came out. At that point, I felt robbed because I was only getting the series one show at a time. It felt like a morphine drip.

I never watched The West Wing when it was on TV. I wasn't into mainstream TV at the time, I mean it was on NBC and I didn't want to invest my time into a watered-down network drama. Nicky is a huge Aaron Sorkin fan and she listed The West Wing among her top all-time TV shows. She had the first few seasons on DVD, so I started with the first disc (which had the first 3 episodes). I kept saying, "One more episode." Before I knew it, I finished the first season and tore into the second season. I enjoyed Sorkin's Sports Night and decided to take the plunge and see what all the fuss was about with The West Wing. This was last year a month or so before the launch of his new series on HBO called Newsroom. I wanted to absorb the Sorkin seasons of The West Wing (he only did the first four before leaving as show runner and head writer), which took almost two months to devour the first four seasons. I enjoyed the complexity of Sorkin's dialogue the most, but characters constantly walking and talking irked me to no end. Nicky made me keep an eye out for other "Sorkinisms", which were fun at first, but it only made me more paranoid about my hackneyed phrases that I beat to death like a dead hooker.

I don't think I would have finished Mad Men, The Wire, The West Wing, or House of Cards for that matter if they were not any good. So the series binge can only happen if the series is actually good. Heck, I'm never that bored or have a surplus of free time that I'm looking for TV shows to get into (like Lost... I always said I'd wait until a time when I had a huge chunk of time to do nothing, then I'd finally watch Lost from start to finish, but that has yet to happen). I have fairly high standards when it comes to investing time into TV programs. I waste time with sports because of the potential financial aspect involved in the game(s). Otherwise, I definitely would watch a lot less.

I'm someone who vigilantly devotes time to read books because there's more books out there to be read than time left in my life. I want to tackle the looming pile in my office, a tower of dozens and dozens of books that haven't been touched. I'd hate to give up reading time by wasting away zoning out to a poorly written, cliche-driven show. I also have commitment issues, so I will only go balls-to-the-wall unless I truly dig something. That's what happened with House of Cards. Once I was hooked, I couldn't stop until it was all done. Thankfully, I can get my life back and resume to daily grind.


1. Compared to Kevin Costner's trainwreck of a British accent in Robin Hood: Prince of Thieves where he gives up about 2/3 of the way through the film, then talks like he's from Iowa.