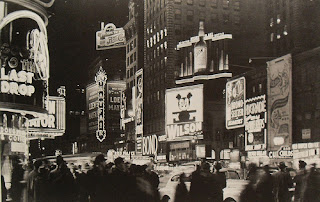 1953. Leo's coffee shop on the corner of Ninth Avenue stayed open late. Every night. Leo's catered to working musicians, surly teamsters, and the occasional stray drunk who sipped scalding black coffee in a futile attempt to sober up. The last of the union guys left around Midnight after the theatres shut down for the night, but musicians trickled in at all hours. They walked down from Sixth Avenue and popped in during an extended break in between sets at the Three Deuces or Onyx. A final wave of musicians came in around 2:30am when they were officially done gigging for the night. They often hung out around the corner and dragged joints mixed with tobacco and reefer before going inside Leo's.

Leo, the original owner, had passed a few years earlier and his son Mario took over. Mario felt honored to feed the best musical minds in the city. Mario got hooked on the good shit when he was in the Army. Jazz was the popular music of the day during WWII, but all the Swing Era stuff like Count Basie and Duke Ellington was watered-down ear candy for the masses. Mario sought out the edgy and hipper material like anything from Gene Krupa. When Mario was stationed in England, the black soldiers on the kitchen staff had a small collection of records. They turned him onto "Bird",  an unknown Kansas City musician named Charlie Parker. Mario got an introduction to bebop and was hooked for life. After the war, Mario returned to NYC and worked in his father's coffee shop. Within a few years, West 52nd Street would become the epicenter of the (downtown) Jazz world and Mario's family business was only five minutes away.

Mario was sympathetic toward the working musicians. Most of them were perpetually broke, which didn't help because crooked club owners constantly screwed them out of a fair wage. A lot of them ate on credit. All they had to do was flash their union card and they got set up. The broke guys without credit had to wait until the end of the night to get paid for their gig and they went directly to coffee shop to chow down. For the saddest bunch of them, that late night feeding of steak and eggs was their first meal of the day. They played three or four sets utterly famished and hoped their growling stomachs did not drown out their horns. A few musicians ran up ridiculous tabs, but Mario was not vigilant in getting paid back. He felt it was his contribution to the arts and he happily fed starving artists.

Mario only got pissed off with Bird, but then again, Bird pissed off everyone at some point. Bird ran up a $33 tab (coffee and donuts mostly, but Bird loved fried liver and onions too) and had broken the heart of Mario's cousin Maria. She was one of the best waitresses at Leo's and she fell hard and fast for Bird. Maria was way down the list of Bird's priorities, something she discovered too late.

Bird had an unwavering loyalty for two things: smack and music. Most of the time, the smack was got the top-billing. Finding his fix was the main priority. He tried to make music #1, but if he was too sick to play, then it made sense to get well first before he could play again. He couldn't earn money for junk unless he played, but he couldn't play unless he wasn't dope sick. And if he couldn't cop any dope, he'd get shitfaced on whiskey. It was a nasty cycle. The club owners should have just paid Bird in heroin and cut out the middle men uptown.

Bird ran up tabs all over Harlem and midtown. The owner of M & G's chicken shack up on St. Nicholas' Avenue had a legendary dispute with Bird. Not only did Bird run up a tab (twice as much as his one at Leo's), but Bird also slept with the owner's wife. He tried to stab Bird and almost got away with it before he was tackled by a couple of cooks. Bird shrugged off the assassination attempt and joked, "Looks like I won't be eating fried chicken anymore. I needed to go on a diet anyway."

Sometimes Freddy "Snooze" Bones hung out at Leo's. The legendary bass player from South Philly grew up with Coltrane and they played in the Navy band for a stint. Freddy Bones told the funniest stories and he'd always have a group of five or six young musicians crowded around as he spun tales about being on the road with Dizzy, or jamming with Coltrane, or getting robbed at a brothel in East St. Louis.

Freddy Bones had a nasty junk habit and he'd often nod out in mid-sentence. Someone would have to kick him in the shin, and he'd shake his head and pick up where the conversation left off. He'd snooze in mid-conversation which is how Freddy Bones got the nickname... Freddy Snooze. Bones wasn't even his real name. Neither was Freddy. He was born Clarence Fredricks, but a clerical error with the Navy meant he became Seaman Fredricks Clarence. Everyone in the Navy called him Freddy and he as skinny as a skeleton and the original "Bones" moniker stuck. After he developed his $15/day heroin habit, he because "Freddy Snooze" or "Snooze Bones." No one was bold enough to call him "Snooze" to his face, but it was such a common occurrence that everyone eventually had a Freddy Snooze story about him nodding out at the strangest places.

Freddy Bones almost died when he nodded out while smoking a cigarette and it slipped out of his fingertips. The thick smoke woke him out of his deep nod. He was able to put the smolder mattress out before his entire room caught fire. You woulda thunk that incident woulda encourage Freddy Bones to quit, but it had the opposite effect. That wasn't the first time he nodded out in bed while smoking. Freddy Bones felt untouchable for several reasons: 1) he must've avoided four or five other potential bed burnings, 2) his ship in the Pacific survived WWII without a scratch (narrowly avoiding two kamikaze attempts), and 3) a pimp once tried to shoot him at point-blank range and fired five shots, but four missed and the fifth grazed Freddy Bones' shoulder and he was left with a minor flesh wound. He liked to show the scar to anyone who asked.

Whenever Freddy Bones was broke or the dealers on Lenox Avenue were out of supplies, he resorted to Seconals or other heavy sleeping pills. He washed them down with whiskey and tried to sleep for a couple of days while his body went through a tumultuous storm of detox. He stayed in bed and fought back the unpredictable flashes of hot sweats and teeth-chattering chills. He only got up to take more Seconals and hopelessly waited for a new package to arrive. He waited. And waited. And waited. When he got that knock on the door, he'd jump out of bed to get his medicine. It was a ferocious monkey on his back, but it gave him the strength of fourteen stampeding horses.

The initial shot made Freddy Bones feel normal again. The flu-like symptoms magically dissipated for the first time in days. The second shot was an impenetrable cocoon that protected him from the slings and arrows of the outside world. With an outer shell in place, Freddy picked up his bass and hopped on the downtown subway. After being out of commission for a couple of days, he needed to get back to work. Like so many hep cats hooked on junk, if he didn't play then he got gravely ill and puked and shat himself. Freddy Bones played every night for his fix. The rabid monkey welded to his back needed to be fed every couple of hours.
by Pauly at 2/07/2013 05:10:00 PM