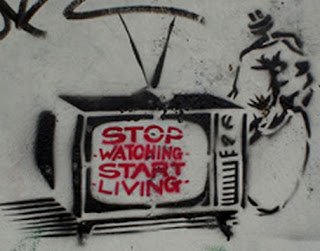 I'm a sponge. That's dangerous because I'm a sponge who feeds off of my surroundings and absorbs the vibe of the environment. In hostile situations... I get hostile. In lad-back situations... I'm laid back. Some folks are wired to rebel against their surroundings. I used to be like that and fought whatever environment I was thrust into, which was super exhausting, until I eventually figured out that I was fighting myself and the fear of assimilation. Once I let go... things got better. I realized that adapt well to keep the harmonious flow of things, but it's not a complete and perfect assimilation. It's more like being a chameleon... on the surface it looks like I blend in, but underneath it all, I'm something totally different.

It's just how I'm wired as an observer and chameleon. It's always been important for me to remain on the fringe of things and not get too deeply involved (thereby losing my objectivity). But it's vital to be a chameleon and blend in the background, especially while hanging out on the fringe. You really can't maintain anonymity on periphery unless you blend it. No one likes the "watchers", but if it weren't for the watchers, then they wouldn't be able to keep the herd honest.

Sometimes I think I'm more of an invisible man than a chameleon. It's not that I blend it... I'm completely invisible. Sometimes this can be a cool trait to have, mostly it's annoying because people walk right into you.

You're more invisible than you think, whether it's driving on the freeways in one of a million other cars, or shuffling to work on a subway as one of a million other commuters. In the virtual world, we're mostly all invisible. The vast majority of the web is generated by a small assortment of content creators and the rest of the sprawling web content -- specifically social media -- is generated by users.
The majority of the social media cycle is driven by egomaniacs and other creative types, but the mass appeal to Twitter and Facebook is that it allows its users to be active voyeurs while remaining invisible. You can be a part of the ether without participating it in, or you can add to the static by cranking out more static.

Bottom line... you are what you consume (whether it's food or popular culture). But deep down we don't want to be judged by those (entertainment) choices, so we often hide the more embarrassing selections and only reveal things that might make you look cooler. That's why there's some pressure to watch the niche shows (if you want to be a hipster), or delve into mainstream (the most popular TV shows, sports, and current events.). I once had a close friend confide in me that he watched Survivor because he wanted to keep up with everyone in his office and not feel left out of the loop during morning water cooler chit chat.

I'm more interested in the other shit that you watch. That's what truly defines you and your true tastes, whether it's a guilty pleasure (insert title of embarrassing reality show here _____ like the Shahs of Sunset or Teen Mom 2) or something to just pass the time (watching The Bourne Identity or any of the Matrix movies for the thousandth time).

TV is truly the opiate of the masses. Projection, submission, zombification, pacification. And if you sit around and watch nothing but alphabet news networks, then you're the perfect candidate for indoctrination after being bombarded with propaganda disguised as news nuggets.

Sometimes I catch Nicky watching really bad reality TV, but I let it slide because she doesn't give me shit for watching Ivy League basketball on women's Pac-12 volleyball. Hey, Nicky is on the production side of reality TV so it's almost like work for her to keep up on her contemporaries and rivals. It's like when she used to work in the "pictures" and was a film executive she spent most of her weekend mornings going to the movies and viewing recent new releases or catching something that flew under the initial radar, yet everyone's raving about.

I have binges when I'm watching a lot of non-sports TV programming (interesting how it's called programming, more like conditioning the masses to become consumers). I zone out in front of the boob tube during down writing cycles. But TV is like eating junk food, then feeling guilty so you work out twice as hard. I also feel as though I need to read twice as much TV I watch. So two hours of TV is counter-balanced by four hours of reading. That 2:1 ratio seems about right. Reading massages the brain muscles, it makes you smarter and expands the creative mind. Too much TV (I should say, too much bombardment of commercials to try to trick me into buying shit I don't need) just makes me angry, depressed and encourages me to consume.

I'm not embarrassed to say that I watch random college basketball games for enjoyment, but most of the time I'm scouting a team for future betting purposes (like March Madness). The PAC-12 women's volleyball is pure ogling and I'm overjoyed by the addition of the Pac-12 channel. Other friends with different cable providers have yet to acquire the Pac-12 channel and I tell them how they're missing out on some serious butt-hugging-gazing. One of my friends used to cover women's volleyball for his college newspaper and I thought, "Holy amazeballs, talk about a sweet fucking assignment! How can I sign up for that?"

You know those silly movies about adults going back to high school in some undercover fashion? Yeah, I considered re-enrolling in some state college and going out for the school newspaper, just so I can cover women's vollyeball. It's perverse, but after sitting in casinos for seven straight years covering sausage fest after sausage fest of a poker tournament, a guy can dream right?
by Pauly at 2/13/2013 04:20:00 AM