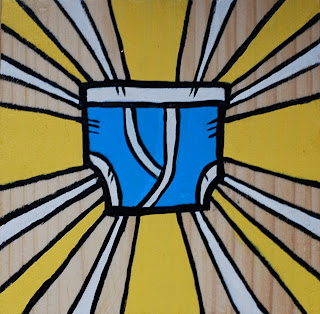 Underwear. You can never have too many pairs. I specifically purchased 28 pairs of underwear so I would only have to do laundry once a month. I usually travel so it's rare that I go a full month without doing laundry. I finished a four week stretch at home, which is about right because I was in Vegas four-five weeks ago and I did laundry when I got back from that sojourn.

I know some folks that could make 28 pairs of underwear stretch into 2 months, or even 3. That sounds morbid or disgusting, but hey, some people have weird habits when it comes to undergarments.

My bud Schecky worked in rock and roll for many years as a road manager for a well-known 90s band. The band added fresh/clean underwear to its backstage rider. It wasn't just their band... but other bands often asked for a fresh batch of underwear. Bands didn't always eat the food and occasionally left some of the booze untouched, but they always took the clean underwear. The longer you're on the road, the more valuable an extra pair of skivvies can be.

Aside from books, the only bulk item I own is underwear. 28 pairs. I actually have 30, including two emergency pairs, one of which I wore all of Monday because I woke up and hopped in the shower and opened a drawer to see zero reserves, so I had to go to the "in case of emergency break glass" and wear one of two spare pairs of boxers. Without any underwear, I could not finish the day without doing laundry.

I also notice there's a correlation that I almost always do laundry whenever I'm on a collision course with multiple deadlines. Yeah, it's a weird coincidence that I'll finally break down and do laundry instead of working on a deadline. I'm actually in the middle of four different things I'm juggling and I have no one to blame other than myself for putting everyone off until now. Then again, I do my best work when I'm under the gun. I thrive under pressure.

Yeah, it's the end of the month and rent is due in a few days, which means I had to get off my ass and crank out a few freelance pieces (a column on Jerry Buss's passing) and finish off a project for the Frenchies, not to mention a baseball preview for Ocelot and fourteen other silly projects I thought I wanted to do, but never had the time to finish. Instead of writing, I'm jerking around doing shit I should not be doing (like laundry, or blogging, or listening to podcasts, or just see the list below). I even cleaned my closet and hung up shirts on hangars instead of leaving a small mountain of balled up clothes on the couch/futon in my office.

In college, I always cleaned my room during midterms because I felt compelled to do something constructive as a way to combat a wave of guilt that I had for not studying. That's why I cleaned my closet and did laundry on Monday instead of working on other stuff. It's not being lazy if I'm doing other stuff, right? I mean, I had to wash those 28 pairs of dirty boxers eventually.

I'm not someone who relishes material items aside from books and underwear. I own no furniture (everything is Nicky's save for the TV and a desk chair that Halli gave me as a memento from when we all had to leave the Ice Palace). The only thing I own that you could call excessive is... books... which does not seem odd for me. It's almost a given that I'll have a ton of books. I'm a writer. Books are like drugs, or like know-it-all and highly-entertaining friends with lush stories. Books are my druggie friends.

Whenever I visit someone, I carefully inspect their book shelf and their medicine cabinet. Yes, if you invite me to your home, I will snoop for your stash in your medicine cabinet. I'm a junkie, but not a thief. I won't steal your meds, but I will probably offer you a swap at some later date if you have some good stuff. You should be wary of strangers in your bathroom because not everyone is honest like me. Be careful of the millions of closet pillheads who won't think twice about pillaging your pill bottles.

You shouldn't care what other people think of you, and I won't be quick to judge someone based on their book shelf... especially in today's world of e-readers. I forgot who said it, maybe Capote or maybe it was Tom Wolfe, but they said something like don't sleep with someone who doesn't own any books. Of course, they're not talking about hookers, then again you'd be surprised to find there's a fair share of literate street walkers. Not everyone who sells pussy for cash or chugs cock for rock is an illiterate crack whore.

However, I'm surprised to visit other people and see how few books they own. You have no idea how many friends I have who tell me... "You're like one of the only writers I read." In a way, it's uber-flattering, but in another it makes me afraid of the future when people with advanced degrees barely read anymore. We're on our way to becoming a nation of illiterate Kardashian-worshipping klones and Honey Doo Doos. Sometimes I go to rich people's house and see a shelf with a lot of dust which tells me, 1) their maid is fucking lazy, and 2) those books are for show and they're not really an active reader. It's like the books are part of the decorations like a table or a vase, or it's just a ruse to keep up a nice appearance with a perfectly manicured lawn. You don't want your superficial neighbors to think you're a Philistine, right?

Then again, Nicky's book shelves haven't been touched much ever since she migrated to a Kindle. I looked one shelf the other day and was surprised to find a few gems that I'd like to read or re-read. On the other end of the spectrum, I found Liz Wurtzel's gutter-emo-memoir Prozac Nation, which was the rage like 15 years ago among Gen-X twenty-something femme fatales. Unfortunately, the most intelligent thing  to ever come out of Lizzie's mouth was David Foster Wallace's cock.

Reading never used to be a chore, but now it's become an ugly art form like annoying-loud opera singers. It's hard in today's age to be an avid reader of anything with substance. We spend so much time sifting through narcissistic updates and speed reading superficial articles from your favorite news aggregators excelling in churalism. Heck, even CNN has outsourced their sports department to a site synonymous with slide shows to tell a story.

I try to give away books that I think friends will enjoy. I'm just completing the cycle. I'm fortunate people give me books or recommend books, and I want to help reciprocate. What I really wish I could do was give someone a book that always comes with a 12-hour chunk of unfettered time so they can read the book. A book is anywhere from $10 to $20, but chunks of peaceful time is impossible to get. I have a lot of friends who used to be voracious readers, but they seriously lack the free time with real life hassles like work, relationships, kids, or migrating online to cultivate a lush virtual world and keeping up with the online Joneses.

The competition is fierce with addictive static of social media and cable TV and new movies and old TV shows and old movies being released every single day on Netflix. The entertainment world is dominated by auditory and visual nuggets which are easy to digest, so it's almost insulting to some people (who are used to having their entertainment spoon-fed to them) if you ask them to devote 10-15 minutes to read a piece of stellar longform journalism, let alone ask them to devote 12-15 hours to read a book. If you had six extra hours I can guarantee you'd probably opt for extra sleep, or use that surplus to spend time with something far more important like your family or significant other.

Anyway... let's get back to the real problem... my procrastination. I should be working my ass off and editing things, but instead, I'm farting around. You'd be surprised to find out how much stupid shit I did instead of sitting down to write. I should clarify... I wrote a lot, I just don't like to edit. It's the least favorite part of  the writing process. I remember having a long discussion with my friend Mean Gene over the editing process. He felt that was his favorite part of being a writer. I had the opposite affect... it was the most excruciating and painful part.

To avoid that searing pain of editing, I often embark on other things to procrastinate. For example in the last 24 hours or so...


1. I looked up the remaining schedule of every Lakers game and other teams that could be fighting for the #8 seed in the NBA playoffs (Houston, Portland, Dallas, and Utah). This is supposed to be research for an Ocelot Sports post that I wanted to put up last week.

2. Listened to 50 versions of Tico Tico and then settling upon a random organ video on YouTube, which I played five times yesterday... for shits and giggles.

3. I passed out on the couch while watching the recent episode ("Video Games") of Girls.

4. I watched the Catfish reunion show and must've cracked the same joke forty times about the lack of intelligence and blind will of the duped participants. "Man, I can't wait to call up these dumb fuckers and pitch them some stock." To Nicky's credit, she laughed at least 1/4 of the time, but hasn't laughed since the 35th time I made the joke.

5. I listened to all of Thom Yorke's new album Amok from his side project with Flea and decided that I miss Radiohead, and I'm convinced more than ever that Yorke is an alien.

6. I watched three innings of a Yankees preseason game, then spent an hour writing emails for a ongoing thread with a bunch of Yankees fans including my brother and Jerry, in which I said that the Yankees suck and that I wish A-Roid would get slashed by a wilding pack of teenage girls with razor blades.

7. I read my brother's thoughts on the win totals for all 30 major league baseball teams and tried to figure out which teams we might bet on. (Going way UNDER on Houston Atros).

8. I wrote about my take on win totals for all 30 MLB teams, and showed them to my brother, which eventually will get post on Ocelot Sports next week.

9. I read Jess Welman's tumblr and her hysterical story about being a seat filler at the SAG awards.

10. I caught up on a few hours of podcasts (including a sensational story about misplaced religion by Christopher Hitchens at a Moth show in 1999, a few hours of sportsbetting podcasts, and the B.S. Report from Bill Simmons, which I usually don't listen to but I wanted to hear Chris Connelly's take on the Oscars... oh, and I also fell alseep listening to conspiracy fodder by Clif High, the guy who created the infamous web bot project that tries to predict the future.)