Disorder at the Border (Fiction)

1949. Six, maybe seven people listened and talked and rapped and laughed and smoked and drank and sang and scat lines of Rimbaud over Dexter's and Wendell's solos that floated through the two room apartment. Three of the gals sat on chairs, one of them wobbled and squeaked all night. Two of Carlo's friends stood. One of girl's shy friends leaned against the wall, another hep cat was so zooted that he paced back and forth as much as he could in the small room. 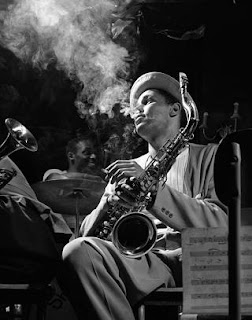 The Hunt by Dexter Gordon and Wendell Gray was a record so worn out and had a minor scratch so you could not listen to last ninety seconds of the last track. It could have been worse. At least it was at the end of the album. They didn't know how many times it got played in the first month. Probably not as much as the second or third months. Six months later it needed to be replaced. Money wasn't a luxury and neither was new records.

Any money got devoted to paying Anthos the Greek back rent so he'd leave them alone. They didn't mind when he cursed at them in his native tongue, but sometimes he banged on the door so loudly they thought he was going to knock it down with a baseball bat, but it was just his fist. Pounding away at the door.

Anthos was near bald and a layer of sweat covered the skin on his head. He stood in his undershirt and suspenders swinging away at the door like he's Joe DiMaggio and cursing in Greek about how they were deadbeats. They tried to pay the Greek a little at a time every week. So he'd stay away. His wife was a kind woman who understood their plight. Sometimes she baked them bread. Most of the time she saved them from an whipping by calming down her irate husband. It wasn't personal. For either. He wanted money that they didn't have. Anthos was just the super. He fixed things. He killed the rats. He collected the rent. He pounding on the door with his fists.

As long as they paid Anthos he would not taking batting practice on their door with his furious fists.

Carlo fell into some money after he sold a couple of stories (based on poems by T.S. Eliot) to a literary magazine in Boston. They sent him a check. Account drawn from the First Bank of Boston. The editor was kind enough to send Carlo a small advance for more stories. Carlo cashed the check and gave Anthos the Greek a portion, but they were still two and a half months behind on rent.

They spent the rest of the money buying supplies for the next couple of nights which they expected to bleed into two long days maybe three. Carlo returned with a tin of tea. A log of salami. Crackers. Two jugs of white. Cigarettes. Carlo brought over four, maybe five inahlers. He hoped Helen would bring more.

Sal showed up with a half of a pint of rye he had lifted from a bum who passed out in a doorway on 114th Street. He scored a little reefer from one of his ex-girlfriends who was dating a guy who knew a dealer on 127th Street. She gave it to him for no reason other than she didn't want to smoke it because it gave her bad thoughts. He thanked her and offered to take her to see a movie. She declined but agreed to go for a walk in Riverside Park at an undisclosed future date.

They cracked open an inhaler open just before the record skipped. Sal jumped up to return the record to the beginning. They never got around to buying a new record. Or stealing one. That was always on the list. If they found a copy, they'd lift it. For some reason, they could never find one. At Presto's shop on 4th Avenue there was a copy on the wall behind the counter. Impossible to steal.

"You shouldn't steal anyway," waxed Carlo. "It will make you unhollow. Dead in its soul."

Stealing was out. For the moment. The discussion turned to cancer-free cats. No one ever saw a cat with cancer. It's something in their blood. In their genetics that made them predisposed to the illness. Then again, none of them were doctors or vets. Another one of those peculiar tangents that they'd start talking about and then it ended in a huge mess of shouting and screaming, but nothing malicious, more like animals communicating with each other in loud primal screams. The screams would bleed into laughter and the laughter would turn into muffled giggles before everyone got silent and were left alone with their thoughts for a few seconds before someone broke the silence with something new to move along the conversation.

"The end of the world will start here," she declared.

The war had been over for a few years. But that didn't mean a new one could start up. Texas? Didn't seem like an important state for strategic reasons. Most of it was desert and oil. Guess its the oil that's important. The fuel to keep the machines running.

Sal missed sitting in the front seat and watching the yellow lines in the middle of the highway blur into one continuous line that never stopped. It's along that line that was the path and they were supposed to follow that path until it ended. The final destination was whenever the lines stopped. At the ocean, Sal presumed. At the edge of the Pacific Ocean and it ran all the way back to the end of Long Island and Montauk. Beginning to end. Cruising on airless tires, hoping to stay out of the ditch and keep the vehicle moving as swiftly as possible, while eating some Bennies along the way, never too much that they were zooted but enough to stay awake so they could keep driving and following the line until it ended.

"This is outstanding wine."

"That's explains why it tastes so outstanding."

The music hit the skids and interrupted a Dexter Gordon solo. Sal jumped up and started the record from the beginning with the first track. Disorder at the Border.
by Pauly at 2/01/2013 04:20:00 AM