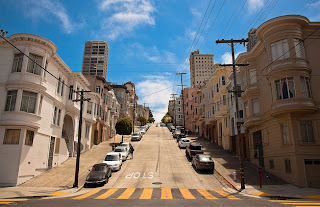 In San Francisco, we interacted with our neighbors frequently. We lived on the second floor of a Victorian. The woman downstairs, originally born in Ireland but a resident of San Francisco for over two decades, taught yoga down the street. She had a gigantic boxer who barked at everyone who walked up to the front door. Postal workers were scared shitless because of the beast. The funny thing is if you saw the dog in the street, it's the most chillaxed mutt you'd come across, but the moment you infringed upon their home, the dog would go berserk.

The upstairs neighbors were a rotating mix of Grade A San Francisco Hipsters and Burning Man converts who spent all year working on a Thai-vegan-taco truck, or teaching yoga down the street to Pacific Heights Xanax-chomping housewives so they can save up for Burning Man, and whenever you ran into them in front of the building, the only thing they can talk about is how many days it was until Burning Man or how they were diligently working on their complex, cosmic, ethereal Burning Man art installation and sewing hand-made costumes using real seashells and goat hair, and then upstairs was quite during the week they went to Burning Man and when they came back, they threw post-Burning Man parties with lots of weird half-naked people holding crystals and listening to dubstep.

We had to get to know our neighbors because we didn't want them to call the cops every Monday night when we played poker once a week in the infamous Ice Palace games hosted by Halli that would run until the wee hours and were lucky our neighbors put up with those shenanigans with glass breaking and me cranking up Jay-Z at 3am and people coming at odd hours and our friend The Wolf howling whenever he won or lost a pot which seemed like every ten minutes.

Generally speaking, the average resident of San Francisco might fall into the category of a hardcore hipster or someone with serous hippie tendencies, but they were much cooler and had more depth than anyone we encountered in the Slums of Beverly Hills. The thing about San Francisco... there was a prevailing sense of community with gregarious attitudes and hope for humanity, so you wanted to get to know your neighbors and help each other out whenever you could.

In Los Angeles, it was the complete opposite vibe. It was everyone man and woman for themselves in an competitive "me" conscious world where everyone you meet is desperately seeking their fifteen minutes of fame. You're surrounded by people who fabricate reality for a living... and their damn good at it... from plastic surgeons in Beverly Hills, to personal trainers in WeHo, to video editors hunched over their laptops in the dark and fighting off carpal tunnel while mainlining Red Bull.

In the Slums of Beverly Hills, your neighbors don't give a shit about you because everyone is too self-invovled to notice what your doing. It's the perfect place to disappear and be invisible, which is one of the few things I love about this place. I usually loathe it but on days when I want to disappear, it's easy. I just have to stand still and I'll get ignored. It's why my neighbors scream at the top of their lungs and have fights with their significant others without thinking twice about getting embarrassed if anyone hears them... because after all, nothing is more important than themselves and if anyone was listening, well shit, it's Hollywood... every wants an audience.

The nonstop sunshine and mixture of car pollution and chemtrails creates a soupy layer that hovers over the city and intoxicates the denizens of Southern California by preventing oxygen from flowing to their brains, so they get into this weird zombie-like trance. Or maybe it's the inertia from being stuck on the 405 for too long and you get freeway legs, just like cruise chip travelers get sea legs if their adrift for too long.

Everyone drives around everywhere in Los Angeles, totally distracted by cellphones or traffic-tilt, but they think they are invincible in protective little bubbles and spend most of their waking hours detached from reality because they're constantly cultivating their online persona. It's tough enough to try to be yourself and be cool in real life, try struggling with trying to be cool online as well. It's a stressful undertaking and I'm surprised more people don't snap and have MORE breakdowns/mental implosions on Facebook and Twitter.

It's hard to get to know your neighbors in LA when they are too self-absorbed, but then again, you don't have the time to develop an actual relationship. More than 33% of the tenants in our building turn over in six months. Within a year, it's 50%. They're gone. One day their car is no longer parked out front and there's a red and white FOR RENT sign dangling on the side of the building.

I'm sure those temporary neighbors hated our slumlord, or maybe they didn't want to pay his outrageous prices considering he never fixed anything?

Or maybe they loathe all the ruckus from the steady stream of homeless can farries digging through the dumpsters.

Or it's the illegal immigrant landscappers who showed up at the crack or dawn?

Or maybe it's Nicky bonging out in the afternoons and the luscious aroma of medicinal marijuana filled the alley?

Or they hate jazz music and get incensed when I cranked up Coltrane on full blast?

Or maybe it's the upstairs neighbor whenever she practiced her violin (which made a gargling echo like a cat getting stuck in a blender)?

Or it's gotta be the hysterical actress across the alley who practiced her eardrum-shattering vocals at the strangest of times, or screaming at her drunken no-good boyfriend?

Or maybe it's the hipster next door with his ukulele trying to impress OK Cupid dates with his vast knowledge of Vampire Weekend?

Or it's Middle Eastern cabbies who congregate in an apartment across the street for an unknown clandestine rendezvous?

Or the creepy 60-year old Hasidic who drives a white minivan and blocks the alley all the time and he's constantly berating his former teenage bride who birthed a dozen toddlers in ten years and they all have terrible vision and forced to wear thick Coke-bottled eye glasses, which means our alley is over run by half-blind, little, orthodox Jewish kids in white shirts, black vests, and black pants with payot sidelocks dangling down the sides of their heads and screeching at each other because they keep bumping into each other while playing in the alley? 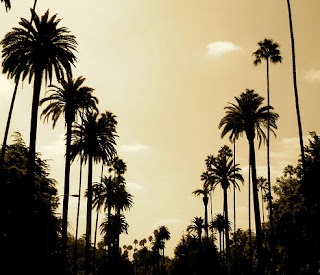 The Slums of Beverly Hills is the kind of transient neighborhood where people stay for a while before they move on... hopefully to better things. Yet, I know this is just a stop over in the long journey of hopeless mediocrity, which housed millions of broken, unrealized dreams. Most of the time I assume those temporary neighbors get priced out and end up in the Valley or Koreatown. Or they figure out there's better places in the neighborhood than living in these particularly shitty dingbats. There's at least one apartment in our building and the two surrounding buildings that can never retain an occupant for more than a few months before the abruptly move out under 90 days. I assume it's either shitty plumbing or lack of light or a menacing ghost or pests or a draft or too much noise. The slumlords will never try to fix whatever is broken and keep renting the place out until they find someone passive enough who won't complain about whatever is fucked up.

Nicky and I are friendly with only one of our neighbors and she has seniority in our building as the neighbor who has been at our slummy dingbat here the longest. She's an artist in her late 50s or early 60s. She moved in here when she was around our age. She said she was the youngest tenant and everyone else was older couples or widowed women. They eventually died off over the last two decades and replaced by much younger people with lofty aspirations of hitting it big in Hollyweird. I think she's an art teacher somewhere but spends a lot of her time working on different landscapes. Nothing too fancy or mind-blowing, but she cranks out cheesy 12 inch by 12 inch paintings that you'll find hung in your aunt's bathrooms or kitchen.  She's laid back and polite and one of those people who live in LA that you know doesn't quite fit in here but can't figure out why she's here. She'd fit in more in San Francisco and not LA, but I don't know her that well enough to pry. She essentially leaves me and Nicky alone and doesn't bother us much. I catch her smoking cigarettes in the alley from time to time. I assume it's her only vice. The fact there's a real artist in one of the seven other apartments gives me hope, especially in this town.

More posts about the denizens of the Slums of Beverly Hills....