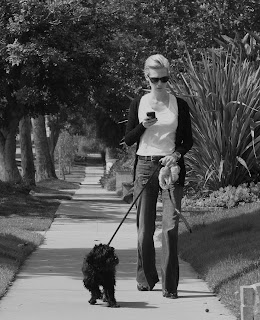 The portly Russian woman ran an illegal daycare facility down the street. She always sat outside on a bench with a cigarette in one hand and a cell phone in the other. She kept an eagle-eye on the kids while they play on the enclosed area. I think her babysitting duties started out as a familial gesture to help provide daycare her son's baby. I've seen him (best description: he's an Eminem clone) drop the kid off. She constantly yelled at him in Russian, he snapped back in Russian, then he kissed his daughter on the head, before he drove off in an Audi. Her daycare duties slowly expanded to two kids, then three and then four. All of a sudden, she had a small empire to manage and hired a friend to help out. There's another old Russian lady who also kept an eye on the kids. I think earlier this year, they added three more kids who come over when school lets out. That made seven total. At least seven. Illegal daycare can be a lucrative business. Maybe it's an organized Russian mob thing? I never knew what to make of it. Mostly, it was none of my fucking business.

The cabs parked in the driveway of a building across the street. At different hours you'd find at least one cab and sometimes as many as four or five. When there wasn't enough spaces, they parked somewhere on the block in the vicinity. Now, if you owned a fleet of cabs I'd hate to think you were living in my neighborhood on the outskirts of Beverly Hills. The cabs parked at random hours made me suspicious. Obviously the cabbies visited that spot for a reason. The apartment was a hub... but for what? Social gatherings? Political gatherings? Religious gatherings? Good hummus? Home-cooked food from the old country? Or something more nefarious? Sleeper cell? Opium den? Whorehouse? Mormon bible study? I never knew what to make of it. After all, it's none of my fucking business.

The skinny guy smoked cigarettes at the same time every morning. He wore a heavy leather jacket, and jogging pants, and a hipster trucker's hat on his head. That was the extent of him getting dressed... warm enough clothes so he wouldn't freeze during a nicotine fix. You could tell that the first thing he did... wake up and walk outside for a smoke. He must've had one of those non-smoking apartments and honored the landlord's wishes for a smoke-free environment. Some of my other neighbors don't give a shit. The Persian lady across the alley leans out her window to smoke. 20 times a day. She doesn't give a fuck what her slumlord tells her she can and cannot do. But this guy listened to his landlord, so much so, that he inconvenienced himself by going outside for 15 minutes to smoke two cigarettes before either 1) returning to sleep, or 2) continuing on with his day. Who cares, right? It's none of my fucking business.

I recognized most of the dog owners who live on my block. One guy about my age wore a Dodgers hat while he walked his corgi. Same time every day. Like clockwork. He yapped on his Blackberry the entire time, and it was like the corgi was lucky to get to go on a walk while the guy in the Dodgers hat discussed work-related stuff and droned on and on and one while dragging his dog around. Despite his intense biz calls, he was polite and always said hello whenever he passed, not breaking stride or interrupting his conversation. I wondered what he did. What cabal of white-collared criminals did he work for? Lawyer? Bankster? Studio exec? Agent? Reality show producer? Could we use each other to further our careers? I never stopped to ask. It's none of my business.

Every morning I noticed the other dog walker. She was an attractive middle-aged woman but with the really red face. I assume she was either an alkie waiting to get her first drink of the day, or someone with bad skin who slept in a weird spot. Bright red splotches. Every day. The red-faced lady walked the most vicious little purse dog you'd ever seen. I had a drug dealer's crazy pitbull chase me down an alley once but that was not as scary as the purse dog's roaring bark. The little critter is possessed by demons. You can see the fire-and-brimstone red eyes. It's like Cujo's spawn. Scared the fuck out of me a few times. Apparently I'm not the only one. She crossed the street whenever someone walked in her direction to avoid a potential incident. Luckily not too many people walk around in LA, especially in the mornings, so her hell-dog doesn't scare the fuck out of too many people on their morning workout, or start a bloody fracas in the middle of the sidewalk. But sometimes you'll see her making a serpentine pattern up and down my block to avoid any other people, particularly other dog walkers. The red-faced lady looked familiar... too familiar... like I've seen her on TV before... but maybe she was only someone who was constantly told they looked like someone famous? Or was it really her? I doubt it was really her, because why the fuck would she be living in my crappy hood? Then again, if the red-faced lady was really her, it was none of my fucking business.

Then there's the old, bespectacled Japanese couple almost 80, maybe even 90-years young? They wore matching track suits (different colors depending on the day) and Nike running shoes. She always carried a parasol and fisherman's hat sat atop his head. The couple constantly exercised. I spotted them walking all the time and at the most random hours. Not just on my block, but scattered around the neighborhood and adjacent hoods. Their daily routine was... wake up, eat breakfast, pick out a specific track suit, then go for a walk all covering Beverly Hills, Rancho Park, Chevoit Hills and West LA before turning around to go home for supper, only to watch a little TV and then go to sleep so they could repeat the process the next morning. That couple spent the rest of their waking hours out and about. In motion, like a river constantly flowing. They should have their own webcam. You could follow them around. They walk everywhere man. All on foot. Everywhere. I mean, I guess there's a lot worse things you can do. I assume if I ever get to that age, I'd be glued in front of the TV 24/7, or trolling comments on different websites. The old Japanese couple constantly walked, but I don't think I've ever seen them talk to each other. They walked in silence. All over West LA. I think its weird, but then again, it's none of my fucking business.
by Pauly at 2/06/2013 12:34:00 PM