Writing about the past is easy. Re-creating it inside my mind is fun, like playing back a videotape, but the images are crystal clear so it's easy to write what I see. I do not share my half-baked essays about the future here. Some things are best left with eyes unseen, besides, most of that stuff sounds like really terrifying and rambling sermon from a crooked preacher. My morbid thoughts on the future are too dark and apocalyptic, or it's the complete opposite and utterly sappy/hopeful. That's why I'd rather turn on the tap of the past and let those old memories flow out. It's easier to tap into the past. It's like that Kierkegaard quote about understanding life backwards. That's why I spend hours and hours trying to make sense of the past by writing up stories of different events that happened.

I might write extensively about the past, yet my non-writing mind is locked in on the future. I spend too many waking hours obsessed with the future. That's all I think about some days.

Here are a few random things that I think will be huge in 2023 and the ensuing decades...

More Latinos are migrating to America from Mexico, Central America, and South America. More Eastern-Europeans are trickling over too. Not to mention the West Africans. Only 100 years ago, the bulk of migration came from Western Europe and Southern Europe. The current wave of immigrants love soccer. Their kids share the same passion and are better than American kids. The current system and sports-entertainment-media machine is not set up to promote soccer because you can't make money on it, but the demand is coming as soon as Big Media and the power brokers figure out pro soccer in America is an untapped gold mine worth billions. Within a decade, we'll see the first big push to bring soccer back into the mainstream (it's tried unsuccessfully several times before). Then comes the boom and the feeding frenzy. Eventually soccer will surpass American football in terms of popularity and in late 21st Century (2080s and 2090s), soccer will become a hotly-contested rival of baseball as the American past time.

By 2043, the NBA grows into a 48-team international sport with four divisions (Europe, North America, South America, and China/Asia/Australia), but by then the professional soccer boom would have washed over America a decade earlier, in which greedy team owners (global mega-corporations raking in trillions like JPMorganChase-BP-Warner Brothers-Halliburton) bribed sleazy politicians to divert educational funds to pay for a brand new ginromous soccer stadiums with luxury boxes, helipads, and sealed off sections for opposing hooligan fans.

America is sliding into the financial crapper and we're one nasty bank run away from another Great Depression. I predict a dismal future with starving poor fight each other to the death on reality TV shows just to eat a bowl of gruel. America has kissed its Middle Class goodbye as we've become a nation of uber-wealthy ".1 percenters" and the rest (99.9'ers) are slave-wage mooks saddled in debt. We're already a third-world banana republic that's leveraged to the hilt with horrendous crime rivaling the worst of the worst in South America.

After the shit hits the fan, the rich will live on palatial estates in green zones, which are patrolled by private security firms owned by global mega-corporations (GoldmanSachs-Blackwater-Google-Nestle). Rural America becomes a no-man's land with roving bands of cannibals and Neo-Nazis bikers, while the bulk of have-nots struggle in giant ghettos comprised of disease-infested shanty towns and millions jam packed into the slums in 250-story concrete towers of squalor, like something out of Judge Dredd. 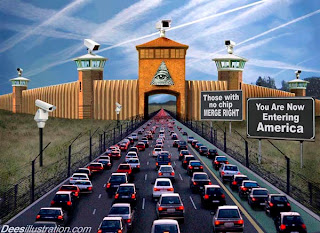 Insider Tip: Invest in private security firms from South Africa and Israel. There's billions of dollars up for grabs in security contracts for exclusive neighborhoods in major metropolitan areas. Fuck Beverly Hills Cop... how would you like to hold the fat, fat, fat contract for the Beverly Hills paramilitary patrol? Private contractors and former snipers driving armored SUVs and providing safe passage to/from Ivy, while keeping both paparazzi and armed East L.A. gangs away at a safe distance.

What we know as the Internet today will not be the Internet of the future. No more net freedom. The days of sharing information freely and having access to anything and everything is over. The Patriot Act of 2021 will usher in the Sanitized Interwebs of the Nanny States of America a.k.a. SINSA. The Censorship Wing of the newly formed Ministry of Cultural Affairs (MCA) will handle the banishment of books deemed too subversive. When you do a news search using SINSA, you get funneled to corporate-run shill site or fed propaganda from the Department of Internet Defense (DID). In order to listen to music, or read books, or look up stuff the old-school way you'll have to visit underground internet cafes, like illegal bars in the basements of buildings during Prohibition. In these illegal dens of interweb iniquities, you will pay for an hour of "uncensored search capabilities" in which you can anonymously video chat, sext, play video games, watch banned films, research the truth, read underground blogs, or jack off to porn. 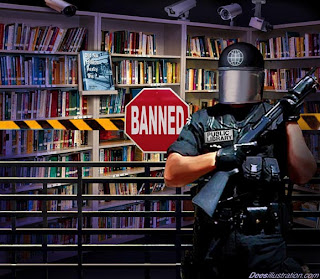 These "free web" underground internet cafes already exist in China in 2013. To deter people from visiting or running these speakeasies, the Chinese government kidnaps and tortures the family members of people who visit these cafes. They make those troublemakers "disappear", and they execute anyone who get caught running an illegal internet cafe. In America the way things are headed (toward an internet kill switch), it's a matter of time before these "free web" speakeasies start popping up in and around college campus and major urban areas. In order to combat the rise of the internet speakeasy, the DID will have to form special wing of undercover Internet Cops (think 21 Jump Street meets Hackers), who get to infiltrate these free internet clubs, and then call in a SWAT raid.

Insider Tip: It's too risky to invest in a free web cafe. More money is to be made in web enforcement. Invest in software companies that detect rogue internet connections and sell that software for a redonkulous amount to DHS or DID or MCA.

All cats. All the time. 24 hour cats. Nonstop reality shows about cat ladies and cat breeders and cats jumping all over themselves. You can also start a second channel called Kitten TV. All kittens. All the time. You'd die of overjoyed kitten ecstasy. Think about it. Everyone loves kittens, right? Creating a Cat Network (CN) and The Kitten Channel (TKC) is a fucking billion-dollar concept. Why hasn't a bunch of suits in Burbank conjured up with this game plan yet? Americans are so fucking dumb they'll watch anything these days, while some people hate their lives so much that they'll gladly lose themselves into a 24-hour cat-themed TV channel just to feel better about themselves. Kittens are instant mood enhancers. All cats and kittens... all the time. Everyone loves kittens and they'll make you melt every time you come across an episode of Box of Newborn Kittens. 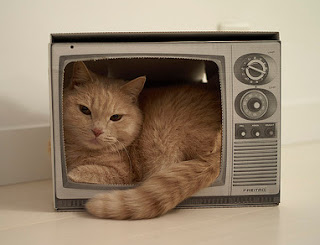 Insider Tip: New TV stations are always desperate for content, so if you can come up with a somewhat decent cat-themed reality show, then you can print money with your idea to create a show called Cat Whisperer. Or how about... Cat Shrink? Or Cat Top Chef? The finest chefs competing to create the best culinary delights for felines? You can have Padma Lakshmi host in a cat suit. Me-fucking-ow.
by Pauly at 5/23/2013 04:20:00 AM