Bad Backs, Bad Manners, and I Know Why You Hate Baseball 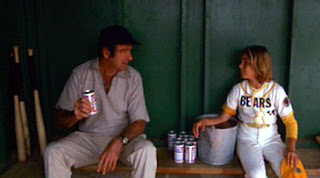 I threw out my back over the weekend.

If you have chronic back problems, then you feel my pain and vice versa.

Time is the only thing that can help me. I need time to rest and my body heal itself.

I spend too much time sitting in chairs. It's a job requirement as a writer. When you have to deal with back pain and forced to write through it, you have to become creative with figuring out how to gut it out without completely killing yourself.  I scrambled to figure out a different way to write... standing up.

I concocted a makeshift standup desk using a milk crate on top of my desk. I place the laptop on the milk crate and voila! It's the perfect height so that can type without any strain. The only problem is that after thirty minutes, my legs get achy and I'm forced to take a break. Normally, during a multi-hour writing/work session, I force myself to get up and take a five minute break every hour to stretch my leg, grab a smoke, refill a drink, walk outside around the building, check email on my Crackberry... all before I return to the office and get back to the grind.

With the makeshift desk, I have shorter spurts. I have to stop about twenty minutes in and stretch my back, doing weird exercises (a really bad fusion of Tai Chi and yoga) on Nicky's yoga mat in the living room. During a bad back day, I'm only getting about 40 minutes of work done for every hour versus the usual 55 minutes of productivity per hour.

Such is life. I'm getting older. I have chronic back issues. It's a trade off I made with God. He let me survive two car accidents in Las Vegas, but in exchange, I'm afflicted with random back pain for the rest of my life. It's not a bad deal, then again, it was an offer I couldn't refuse. So now, mostly every day I am reminded about the randomness of the universe and humbling nature of life. Only God can shoot dice with the universe. We're just along for the ride.

Once you get diagnosed with back pain, you're never the same. It's a day to day thing, much like life. Most of the time you're sore but you suck it up and gut it out. Every once in a blue moon, it's not pretty and you're rendered inoperable. You shut down. Nothing you can do about it. Whenever I throw out my back and confined to bed rest, it makes me truly appreciate the good days.

And on the bad days? It's kind of depressing. Doctors orders: bed rest. It's hard for me to do that because I'm an active person (especially my brain) and not someone who enjoys inactivity. At the same time, I don't sleep much so being in bed is torture. The only solace... books and Netflix (via iPad).

During the most recent stretch of bad back days, I tore through a bunch of books, several of which I needed to read for specific projects, so at the least, I felt more productive while confined to bed rest. I haven't figured out how to write in bed... and it's probably best I don't. Although, I developed a nasty habit that flared up in the middle of the night. Normally when I wake up and can't sleep, I'll get up and go into my office to write or watch documentaries until my eyes get heavy and I head back into the bedroom. But during the back back days, I'm stuck in bed and Nicky is fast asleep next to me, and I don't know what I can do that won't wake her. I got hooked on Marc Maron's WTF podcast, but I caught up with all of his recent episodes and eagerly awaiting the next one. So, my options are limited to Tiger Woods golf on iPad until the battery runs dry, and then I'm forced to dick around with my CrackBerry. The last thing I want to get lost in the static on Twitter and get titled by some stupid shit. That's when I started writing long emails to myself via CrackBerry. But then my fingers get tired after 15-20 minutes and I stop. But a couple of those late night rambling emails were transformed into Tao of Pauly posts, like parts of this one. Even while stuck in bed in the middle of the night, I'm trying to do something creative to keep me sane.

Most people would love to stay in bed and watch Netflix all day while jacked up on pain pills. And yeah, it's fun... for the first few hours... and then you get sucked into that dream-like fog and feel completely separated from reality. It doesn't help that you're watching nonstop movies or TV shows -- which are vehicles for you to displace your reality. So, you're crocked on pain pills and your mind is stuck in that tweaked reality and its easy to get sucked into that foggy and groggy world.

You'd be surprised how easy it is to get brainwashed by flickering images and powerful music to manipulate emotions. That's why I'm concerned with people who sit around and watch reality shows all day, because eventually all of that uncouth and aberrant behavior is becoming the norm. Everywhere. The average person knows that its wrong to behave like reality show participants -- who shout at each other and act like total selfish morons -- however, if that's the only thing you watch night after night, after a while, you'll start to mimic that behavior.

That is what is freaking me out the most... millions of people who treat each other like shit because they lost all semblance of civility, common sense, and good manners. Half the sheeple have been spooked by the fear mongers on news channels and they bury their heads in the sand while corporations rape and pillage America, and the other half of the sheeple have been brainwashed by horrible reality TV shows.

That's why we need to read more books. Books force the reader to use their imagination. Books forces you to use your brain. What a novel idea! Read books to massage your brain muscles and get entertained at the same time.

What readers don't realize is that they are the director, cinematographer, and art director all rolled into one whenever they read a book. I'll write the scene, but you'll have to conjure it up in your head.

Book haters loathe books because they don't want to think. That's why sports or movies are enjoyable and have gross mass appeal because you don't have to think to enjoy it. Hey, I love zoning out every once in a while and watching a good flick. I'm an avid sports fan and enjoy the couple of hours I can devote to enjoying a sport and losing myself in the moment or getting sucked up in pleasurable memories of said sport.

I came up with a generalization based on sports based upon my amateur pursuit of psychology. Don't forget, I'm not a real doctor, but I play one on the internet.

Anyway here it is:

If you hate baseball, then you had a bad childhood.

In case you were wondering... some of the warmest memories I have are playing ball with my brother and father in the school yard on those hazy, lazy summer nights in the Bronx. I loved baseball as a kid. I even wrote about the time my father was named head coach of my little league team. It's titled... The Accidental Coach.
by Pauly at 5/22/2013 03:33:00 PM