My fellow jaded and pharmaceutically-enhanced members of Generation X know about how radio was the shit back in the day before MTV burst in like a mafia hitman and unloaded two taps to the back of radio's head.

The post-war apartment building where I grew up in the Bronx was not wired for cable. At the time in the early 1980s, cable was literally a box the size of a cigar box with an on and off switch. When it the box was "on" you got either HBO (Home Box Office) or Sportschannel. My cousins in New Jersey had something called "Showtime", which showed first-run movies like Jaws or Apocalypse Now. I essentially grew up on 6 TV channels -- 3 majors networks, 2 locals, and PBS.

Sometimes, we were able to pick up Long Island's PBS station, but it was often fuzzy and the same programming as NYC's PBS. I was limited to six stations, but you know what? I didn't mind much. I didn't know any better. This was the start of the 1980s. Things were looking up. The Islamic fundamentalists finally released the hostages in Iran, and a bunch of snot-nosed college punks beat the unbeatable and mighty Soviet Union hockey team.

Despite brief glimmers of hope, times were tough. Gotham was in decay. NYC was broke. I also had to walk to school barefoot in the snow and had to fight off baseball-bat wielding gang members with painted faces and make-shift Yankees uniforms.

Okay. Neither the snow or gang thugs are true, but when I saw The Warriors as a kid, I was freaked out that the rival gangs roamed the subways stations at night. 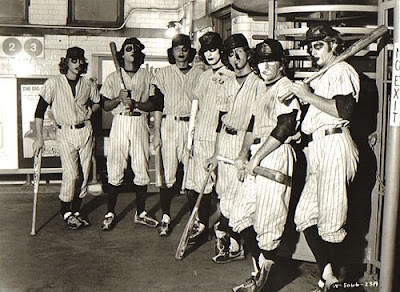 So, we had 6 TV stations and I had memorized the TV Guide. I only had a handful of Atari games, so my entertainment options were limited. I read a ton of books. But mostly when I think about the halcyon days of my childhood, I think about playing sports in the schoolyard (hoops and stickball... yes, my brother and I played a lot of stickball and another game indigenous to NYC called "Stoop") and riding my bicycle throughout the neighborhood (without a helmet). Yes, when nothing was on TV, we went outside to play.

My only real cultural outlet was the radio. Back in the late 70s and early 80s, the radio was the pulse of the outside world. But then again, radio was no better and in the process of becoming corporatized, but at least there was something to connect a kid from the Bronx to the outside world. The DJs were arbiters of taste. If I heard a song on Z-100, then it must have been cool.

Like many kids growing up in the 80s, I did not have too many options but to cherry pick musical tastes from the radio. I was the oldest so I didn't have older siblings to pass along their musical tastes (like Cameron Crowe's sister in Almost Famous giving him her albums when she fled to San Francisco). My parents weren't hippies. My father was much older than my mother and he was straight out of Mad Men. Although my parents lived through the 1960s, they had the mentality of the  1950s and never embraced the 1960s. My mom was the daughter of immigrants, so she had an incredibly sheltered life. My father was too square for counterculture and let the ever-changing nebulous world of the 1960s pass him by while he crawled inside a liquor bottle for the next several decades. I guess one of the reasons I like Mad Men so much is that I'm trying to figure out what my parents were like before they met and before I was born.

My father never listened to music. The only music-related moment happened one night he was drunk and driving us home from a WWF Monday Night Wrestling match at MSG and Lionel Richie's song All Night Long came on the radio and he started to sing along in drunken gibberish while speeding on the West Side Highway. It was scary at the time, but a funny story to tell today.

My mom (and my aunt, who lived around the corner from us) had an extensive record collection, but it was mostly early Beatles and calypso music like Harry Belafante and uber-mellow shit like Helen Reddy. She had a handful of Motown records, but she primary listened to the Golden Oldies radio station, which played a ton of Motown.

When I think about the radio, I have three early memories that are as clear as when I experienced them as a young child.


1. My mother playing Motown on the Oldies station.

2. Listening to Yankees games on the radio with the "The Scooter" (a.k.a Phil Rizzuto) giving the play-by-play.

3. My father shaving with a radio playing in the bathroom. I always woke up hearing 1010 WINS in the background. Their tagline has been imprinted into my memory banks: "If you give us 22 minutes, we'll give you the world."

My earliest musical memories is Motown on the radio. That's not a bad primer and foundation to have as a musical base all things considered. Of course, the rest of my music education was up to me. Without cable and access to MTV, I relied on the few music-themed shows on TV like American Bandstand, Soul Train, and Friday Night Videos. In order to catch live performances, I had to stay up late and catch bands on Saturday Night Live. The first time I saw The Clash? They were the music guest when Ron Howard hosted SNL in 1982 (I think).

I relied on the radio and my high shcool classmates to turn me onto music. I started out high school listening to Top 40 stations in NYC (primarily Z-100) and then slowly moved over to classic rock (K-Rock and NEW) and faint-signaled college radio (either Fordham or Columbia) by the time I graduated high school. My musical interests changed dramatically when I went to high school in Manhattan and met kids with excellent taste in music. Once again, I cherry picked from the bands they adored. I bought cheap cassettes in Chinatown and I gave blanks to friends, who made me copies of their favorite albums. This was at a time when I was introduced to mix tapes. Eventually, I started visiting Tower Records in the Village and near Lincoln Center. I probably wasted weeks in both stores looking around mesmerized at the vast musical archives broken up into different genres. Friends were very good at stealing tapes. Me? I was too chicken-shit, but I the only thing I ever shoplifted from Tower Records was Greatest Hits by The Cars.

Eventually, I learned that Top 40 radio was set-up to sell ad space and that songs were played usually to boost record sales. I still listened to sports and the occasional blacked-out Yankees game on the radio. Plus, I enjoyed the wackos who called into WFAN during the infancy of the all-sports radio station.

As I slowly accumulated more and more albums and built up a music collection, I listened to the radio less and less. The only exception was King Biscuit Flower Hour on Sunday nights at Midnight and they played excerpts from live Grateful Dead concerts. I started to get into The Grateful Dead when I was 16. I had caught my first show at MSG when I was 15 and got hooked. The first CD I ever purchased was Skeletons in the Closet, which essentially was a melange of greatest hits that every classic rock station in America frequently played like Sugar Magnolia, Truckin', Uncle John's Band, One More Saturday Night, and my favorite Dead song... Casey Jones. I used to piss off the neighbors by cranking up Skeletons.

I moved to Atlanta for college. The radio down there sucked. Too many country stations. But luckily, my new batch of friends turned me onto a whole new universe of music. But that's a story for another time.
by Pauly at 5/15/2013 11:11:00 PM