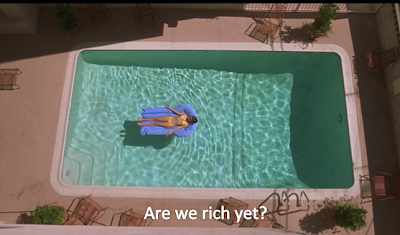 After the massive blow-up, I knew that was the last straw when the actress tossed her boyfriend from the apartment, he slammed the door, sped off and never came back.

I heard her sobbing in the bathroom right after she left a long, rambling, incoherent message on his voice mail. Begging. Pleading. A lot of f-bombs. More sobbing. I thought she was going to drown in her own crocodile tears.

She was a hot mess. She begged and cajoled for him to return. Why? For more punishment presumably. She had ripped him another asshole. Over the previous eight months, their arguments intensified. Longer. More vicious. It was a horrible relationship to say the least. Too doomed star-crossed lovers.

Who cares about self-absorbed struggling actors? They're a penny for a baker's dozen here in Los Angeles. But these sad sacks lived next door to me. I was rooting for them. I'm a sucker for stories about underdogs and anti-heros.

He never held a typical day job and barely did anything except drink at bars in Silver Lake. No wonder she was sitting on top of volcano of resentment that was about to blow. The actress humped a few shitty jobs and went on auditions whenever she could. She never booked any commercials. She never got callbacks during pilot season. Yet, she supported the both of them and was bitter about it. They had fallen into the dead zone for actors and viciously took out their own failures on each other. They blamed each other. They hated each other. All of that hatred spewed out the windows and trickled downstairs across the alley to my office.

You couldn't make up some of the things they said (typical cliche-ridden assaults on each others' character). I tried to record a few of the arguments after I saw the documentary Shut Up Little Man. Whenever I could I jotted down some of the best lines. I heard enough arguing that could fill two-full stage plays... something like a hipsterfied-version of Tennessee Williams.

A couple of days after the break-up, I saw the actress with her mother. It was a strange scene. She seemed catatonic, almost sleepwalking. That's when I realized the actress was moving out. I still don't know if she gave up and went back home to her Midwestern hamlet to find a husband and squeeze out a few rugrats and be the MILTF on the block that turned heads when she dropped off the kids in tight Lulu-lemon yoga pants. The actress was rather plain in the jaded eyes of casting directors, but back home in Wisconsin, she was once the hottest girl in her high school. That was a decade ago. Six or seven years of turmoil and constant rejection shattered your self-esteem. She had zero confidence and casting directors can smell it a mile away.

I felt sorry for her. She could carry a tune better than half of those auto-tuned barbie dolls on the radio. But the actress sang for pure enjoyment most of the time. I never saw her Lifetime or After-School Special movies, but I heard her belt it out in the shower several times a week. Sometimes it was angelic. Soothing. Inspirational. It was one of those morning when I'm in my office and fired up to write because I'm feeding off of that vortex of creative energy that she conjured up with her voice.

She sang mostly when she was in a good mood. Over the last few months, she sang less and less in the shower, meanwhile, she argued more and more with her boyfriend.

She moved out a couple of weeks ago and things quieted down substantially. No more fighting. The hipster couple upstairs took up the actress' slack in the feuding and bickering couple department. Until... Violin girl and her husband moved out. Abruptly.

It was kind of strange. I noticed they had thrown out some clothes last week, but didn't think anything of it. Spring cleaning, right? SoCal had our first really hot week (in the upper 80s and low 90s) so I figured everyone was digging through their closets in search of summer threads. But then on Friday night I heard packing tape. Lots of rips. That should have been a hint, but I didn't think anything of it until I woke up early on Saturday morning to write and I heard lots of movement going on above me. that was unusual for them so early on a weekend. I peeked outside and saw a moving truck. That's when it hit me... they're moving out.

I always wondered how they could afford a two-bedroom apartment in this neighborhood especially with our particular miserly landlord. He worked full-time and she worked part-time and supplemented their income by giving violin lessons to young kids on Sundays. I know he commuted an hour or so every day, so we assumed they found an apartment much closer to trim the commute time. All that time sitting in traffic adds up. Plus it's stressful. Trim just five minutes off your commute each way and in a week, you have one free hour. That lost time adds up, especially caught in the frenetic loops on Los Angeles' freeway system.

Maybe the couple had some financial issues and their original plan to rent a two-bedroom flat was no longer economically feasible, so they were forced to consolidate to a one-bedroom. Times are tough. They were idealistic when they first got married and moved in thinking they could have an entire second-room as a rehearsal room. Reality sunk in. No one hired violin players anymore. Especially in fucking Hollywood, man. As talented as she was, she was a couple of centuries too late. She had resorted to covering bad versions of hip-hop songs while some other doofus played along on a ukelele. Yeah, little white girls singing misogamist hip-hop lyrics with ukes was soooooo 2006. This is 2013 dammit. Time to do something original (which means recycling something from say 20 years ago... so find out what's hip from 1983 and just rip it off). Shit or get off the pot. She got off the pit.

The actress took her shot and missed. Violin girl took her shot and missed. Both moved out. Faded into oblivion. Newly-inducted ghosts. Two more casualties of the Hollywood dream, always wondering "what if" things turned out differently. Mostly everyone craps out eventually, even the one who get their moment in the spotlight and hit it big time. What goes up, always comes crashing down... usually in a drug-infused-bender that ends up with the megastar getting caught at 5am with a trannie hooker in WeHo.

The actress bailed. Violin girl bailed. Even the cigarette lady in the apartment next door moved out. She was in her mid-to-late 40s and lived on the second floor across the alley with yellow-ish curtains stained by the sun and menthols. Four or five empty cigarette packs were stacked on the ledge. Newports mostly. Sometimes Marlboro greens. Occasionally she left airfreshner on the ledge. She hung out the window and smoked. That's what she did. She always smoked. Most nights she chain-smoked. She often talked on the phone and smoked at the same time. She said she was a Persian jew originally from Iran. "A lot of our neighbors are Iranian jews," she told me. They added some flavor to the mix of hipsters.

Cigarette lady had a crazy, shady son who didn't live with her. He had the cocaine-glint in his glazed eyes and always looked like he hadn't slept in four or five days. I assumed he helped one of his hoodlum friends to hide stolen cars. He always parked a different vehicle in his mother's space. It was always something different. The kid gave everyone bad vibes and he got into constant shouting matches with his mother, which often spilled over into altercations with his neighbors. They shouted at each other in English and Farsi and often spit in each others' faces. She seemed nice, but I'm glad she moved out and he could terrorize another neighborhood and hide his stash cars elsewhere.

Ah, just one of those oddities of this neighborhood. There's never a shortage of crazy motherfuckers. You just hope they don't completely lose it when you're living next to them.

Three new apartments. I wonder which new set of Hollywood freaks will move in next? They'll have to have some dough. The slumlords who own these places love it when someone moves out because it means they can jack up the rent a couple hundred more. Even in this shitty economy, a centrally-located apartment on the fringe of Beverly Hills is highly sought-after real estate. This is where a lot of hipsters are washing up when they're priced out of Echo Park, Silver Lake, and Los Feliz.