The Morphine Drip of Binge TV 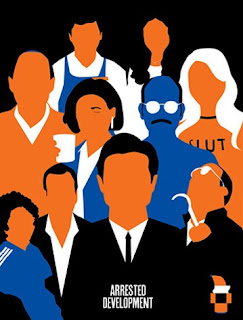 I like humor. It's a defense mechanism to mask all of the internal pain pulsating through my veins. I prefer absurdist humor. The more absurd, the better. As soon as I was old enough and could stay up late to catch Saturday Night Live, I watched it religiously and I'm proud to say I learned most of my politics through SNL sketches. I got hooked on sitcoms as a little kid when Three's Company came on and I became infatuated with Jack Tripper living the swinging lifestyle in Santa Monica (and yes at least two times in my life I had a living situation when it was me with two other women, and this doesn't count the time I lived in a loft with my girlfriend and two roommates who were drag queens, which in itself could be its own sitcom). Cheers came along and I never missed an episodes and I wasn't even old enough to drink in bars, yet I loved every bit of it. When Seinfeld arrived, it blew the hinges off the door. It was wacky, absurd, and the characters were deplorable, which is why it was fucking hysterical.

David Lynch is hysterical in his own way, but it's not absurd, rather it's mundane. Lynchian humor in the same vein as postmodernist dark humor that magnifies the ridiculousness of mundane normalcy.

David Foster Wallace had the best explanation of "Lynchian" humor, which he explained on the Charlie Rose show... "Let's unpack the idea of Lynchian and what Lynchian means is something about the unbelievably grotesque existing in a kind of union with the unbelievably banal."

Subversive humor hits home hard. The Simpsons is such a fantastic show because of all the underlying shots they take at the ridiculousness of American society. I remember reading an article once in the early 90s about how that particular TV critic felt The Simpsons did a more accurate job portraying American family life than the most popular show at the time The Cosby Show.

Dysfunctional is kitschy in 2013. Some of the most popular sitcoms from the 90s paved the way, because they were centered around the zaniness of every day life in the family unit. That's why so many viewers identified with The Bundys and The Connors.

Arrested Development was a show ahead of its time. The conspiracy theorist in me thinks it was canceled because it was too subversive and too much of a social commentary on the worst aspects of American society -- greed, vanity, classicism, narcissism, and over-consumption. That's why it was such a great fucking show. But it was too clever and not your typical formulaic sitcom. The best kind of comedy is the kind that makes you laugh out loud and howl while it's happening, but then takes root and you realize sometime later (perhaps after  second or third viewing) when you realize that the joke is funny because there's some element to the truth about it.

I think I'm paraphrasing Hunter Thompson here when he said, "Only in America do people laugh when you tell them the truth."

I sort of binge-watched the new season of Arrested Development. It was released on Saturday at Midnight on a holiday weekend was genius because it gave rabid fans an opportunity to watch it all in one sitting or for the hardcore fans, it gave them a chance to watch it a second time. All day Saturday, one of the cable channels ran an Arrested Development marathon, so I was able to refresh my memory with some of the last season. I was still working at the time of the Midnight release so it wasn't until 2am or so that I put on the first episode. I showed a bit of restraint and only watched one because I had to get up early the next day for work. On Sunday and Monday I spread out five or six episodes during work breaks. I finally finished a two-week assignment on Monday night and as soon as I was done, I got schwasted and sat down to watch the rest.

This is not the first time I binged on a series. A couple months ago I went a little overboard with House of Cards. Once I started, I couldn't stop. So far, Netflix has released two series online -- House of Cards and the fourth season of Arrested Development. The fucktards at Fox gave up on Arrested Development and it failed to find a second home at Showtime. So they opted to shoot an entire season and release it on Netflix. All at once.

Is this the future of "television"? Instead of traditional network TV, will shows now release it all in one batch online (if not at Netflix, or Hulu, or some new streaming site) at the same time and fans can enjoy it without watching the same fucking car insurance commercial a thousand fucking times?

Last year while I was still recovering after an accident, I spent a ton of time confined to bed rest or couch rest. I was jacked up on pain pills and I revisited The Wire. Last year, in the anticipation of Aaron Sorkin's new show Newsroom, I wanted to catch up on his work on The West Wing. It was one of Nicky's favorite all-time TV shows. Shit, if a former Hollywood D-girl spoke highly of Sorkin's work on a regular TV show, then I knew it must have been good. In a two-week period (actually it was about 11 or 12 days), I tore through the first four seasons of The West Wing. Only four because those were the ones Aaron Sorkin wrote. Nicky had the first three seasons on DVD, so it was easy. I think I streamed the fourth online at Amazon. I noticed you can watch the rest of the season via Netflix, but I haven't been that bored... yet.

A couple of years ago, I caught up with Mad Men in one long weekend. Nicky loved the show and knew one of the actors (way before they got famous), so she watched it religiously. I watched a couple of episodes at the start of Season 3 and thought it was interesting, so I set aside a weekend to watch the first season. I scored a chunk of hash and tore through the first season in one day. I polished off the second season the very next day and at that point, I was caught up. That Mad Men weekend was the first time I found myself binging on a TV show.

Since then I've heard friends go on huge benders in which they watched an entire series in a huge gulp. I turned friends onto The Wire and they did it with that, or friends who never got a chance to see LOST. These binges are humorous, yet scary to see them exhibit the same behavior as hardcore drug addicts. Almost reminds me of the intoxicating Infinite Jest film from DFW's tome. Indeed, TV is the opiate of the masses. In this day and age, DVRs that allow you to record an entire season of a show for later binge consumption, or the ability to stream en entire season via Netflix (and they have a crazy option in which the next episode will play automatically at the end of an episode for continuous streaming). Ah behold the paralyzing powers of a live-streaming morphine drip.

Some of my friends have consumed all of Arrested Development and I'm eager to hear their thoughts. I know Dawn Summers had some mixed feelings about it.

If anything, I'm pretty ticked off that fucking Wonkette conned her way into writing an episode-by-episode recap of Arrested Development for Grantland. What the fuck? Did she give Bill Simmons a  handjob or something? Why the fuck is a politico-bloggess writing a recap (at a pace of two a week) about a comedy show? Sure, I could understand why she'd be an appropriate choice to recap House of Cards as someone who was a Beltway insider, but there's far more talented writers already on the Grantland staff who could have done a superior job. Yeah, that Wonkette shit sort of ticked me off. Stick to politics and lol-cats instgrams and let the stoners keep writing about TV and binge-entertainment

My thoughts on the new season of Arrested Development? I have to watch it again to fully formulate an opinion. Regardless, I was laughing out loud. A lot. Subversive humor and absurdist behavior is something that appeals to me. Plus, I thought Jessica Savage was fantastic. She's an MVP candidate and I'm so thrilled to see a major role go to a 70+ year old actress. Hollywood tends to throw out any actress over the age of 30, so to see an older actress show off her chops was really fucking cool.
by Pauly at 5/28/2013 04:20:00 PM