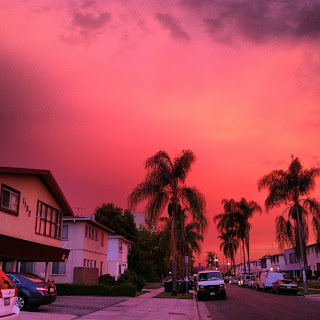 I rolled over in bed on Thursday morning. The sky was purple. I had to do one of those dramatic eye rubs with both fists and dislodge any eye boogers to make sure I was seeing what I was seeing. The sky was purple with little bits of blue and orange on the fringes. The sky looked like that for only a couple of more seconds before the purple evaporated and gave way to a pinkish-reds. I wish I had a camera handy to capture those unbelievable moments. Southern California was always know for its sunsets, but their sunrises are just as impressive.

Later that evening, I was fixing dinner when I heard Nicky said, "Oooooooh. Pretty sky!"

That's her typical response to one of those picturesque postcards you might have seen about L.A. Nicky ran outside and walked down the street to snap a photo (which you can see above taken as is without any hipsterfied filters). At dusk in SoCal, the sky often gets pink and mixes with Mars rusty red with a bit of purple. This is the kind of shit you can't make up and most of the time a photograph never does justice to the reality of the majestic view.

Sometimes the color of the sky reminds me of album cover from Hotel California, which is a better indication of the "packaged image" of SoCal. Image is everything right? And that's the type of natural beauty they were trying to sell. Sure, California has tons of beaches but not everyone has instant access to the tiny strip of land running alongside the ocean. But everyone has access to the sky, which is what overwhelms you. The sheer size of it all is a wondrous marvel. God's canvas. It reminds me of those gigantic Hudson River School paintings (places that eventually became national parks) from the Met museum in NYC.

I often get quizzed about what I live in Los Angeles, a city I clearly loathe and a place where I'm somewhat of a prisoner because I have not driven a car since a near-fatal wreck 22 months ago. I moved out of Las Vegas and to Los Angeles initially because I grew sick of Sin City and did not trust myself in a town with 24/7 temptations. That's how bad Vegas is... so fucking miserable and horrible that I'd subject myself to live in the plasticine streets of Los Angeles. I traded dumb-ass hicks and degen gamblers for vapid wanna-be important people. At least there's more artist types living in L.A. At least I can feel the ebbs and flows of artistic energy surrounding me. As much as I hated my noisy neighbors, I admired their artistic pursuits. When I lived in Vegas, most of my neighbors were junkies and vampires or wage slaves working for the mega-casino-corporations, which meant I never heard a violin or someone singing. Zero artistic inspiration. I was on my own. I felt lost in Vegas. It was a depressing feeling, so I jumped at the opportunity to move in with my girlfriend, who was living in Los Angeles at the time. I was a 45-minute flight from Vegas and only a 4-hour drive through bat country. It was the best of both worlds. I was close enough to Vegas without having to live there.

When friends asked me why the hell I'm living in L.A., my first answer is... "I love my girlfriend and this is where she has to be for her TV production job." My second answer is... "the rent is super cheap in the Slums of Beverly Hills and significantly cheaper than NYC." My third answer is something a friend once said... "If you want to be taken seriously as a writer, you have to live in Los Angeles." And my fourth answer... "The fucking sky, man. Fucking magnificent sunrises and sunsets."