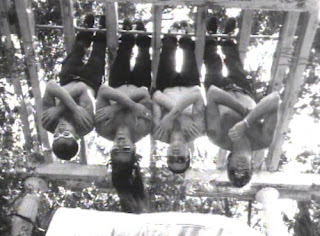 I finished Scar Tissue otherwise known as Anthony Keidis' memoir about leading a dual life as a junkie/addict and being the lead singer of the Red Hot Chili Peppers. Once I picked it up, I could not put the book down.

A couple of years ago, I was approached to ghost-write an autobiography of a well-known poker pro... but with one caveat... I could not write about his drug use and womanizing. I turned them down. I want to write books that I want to read, which means I want to read about crazy stories about infidelity and drug-fueled benders. Very few of us ever get a chance to sleep on pile of cash and be surrounded by beautiful women, so we have to read memoirs in order to vicariously live through those stars.

I declined my opportunity to ghost-write a sanitized book about the genius of a specific poker pro. Last I heard, he hired and fired three or four writers since then and the book is still unfinished.

Anyway... I'm not a huge Red Hot Chili Peppers fan, but I respect them as a band because of their longevity and perseverance to keep going despite overdoses, personal addictions, and several line-up changes. A couple of years ago, a friend recommended the book because I had recently moved to Los Angeles. I never picked it up until this past week because I needed to read it for a potential work project. I found a used copy for a couple of bucks.

Scar Tissue is Keidis' 450-page autobiography, which I proudly devoured inside of a 30 hour period. It arrived in the afternoon and I read a third the first night, the second third the next morning, and I polished off the final third later that night.

I enjoyed reading about what L.A. was like in the 1980s, especially the old rock clubs that had become shitty punk clubs. Keidis attended public grammar school across the street from the same Catholic school that both Nicky and her sister went to (along with those Hilton Sisters way before they got famous for being party girls). Keidis and Flea went to Fairfax high school and they used to dine and ditch at Canter's Deli. In his 20s, Keidis dated Ione Skye (before she got her breakthrough role as Diane on Say Anything) and they shared an apartment about 15 blocks from where Nicky and I live now.

For most of his life Keidis was a drug addict after getting introduced to marijuana and Quaaludes by his father, a struggling actor who turned to dealing drugs to pay for their rent in West Hollywood (at a time when WeHo was a total dump and they were surrounded by trannie hookers). His old man was well known in the club scene in the 1970s and bouncers let lil Keidis tag along like a mascot. He was able to go the Rainbow Room anytime until he got 86'd because of Flea. Keidis took some of his high school buddies to the Rainbow and they pounded pitchers but Flea couldn't handle his booze and puked everywhere.

Keidis dropped out of UCLA because he developed a cocaine and heroin problem. He was shooting both drugs and spent every single dollar on his addiction, something he'd struggle with over the next few decades. It seemed as though Keidis had two distinct periods of his life -- on the sauce and sober. It's during those sober moments when the Chili Peppers created some of their best material and sounded sharp during live shows.

Scar Tissue gave some nifty background on the punk and post-punk music scene in L.A. before hair bands ruled the airwaves and dominated MTV. If your a Red Hot Chili Peppers fan, the books sheds insight in the different incarnations of the band. The original drummer, Jack Irons1, went to school with Flea and Keidis and he played with the Chili Peppers mostly at the beginning (except a short stint in 85-86 when Cliff Martinez was the drummer) before he quit after the OD of founding member and lead guitarist Hillel Slovak (also another school friend of Flea and Keidis). Chad Smith replaced Irons in late 1988 and has been with the band ever since. Smith was a heavy metal drummer with "hair band" hair which was not the type of music genre (punk-funk) that appealed to Flea/Keidis. Smith nailed the audition but they said he could only be in the band if he shaved his head and got rid of the cheesy frizzy locks. Smith wanted to be in the band, but politely told them to fuck off. They respected that and let him keep his hair.

It seemed as though the lead guitar player for the Chili Peppers was always in flux. After Hillel died, the band was crushed. The drummer left, which meant that Flea and Keidis had two choices: break up or find two new musicians (drummer and guitar). They decided to honor Hillel by continuing to play. They hired Chad Smith on drums and then added John Frusciante on guitar. Frusciante was a music savant and still a teenager when he joined the band. He was a Chili Peppers super-fan and had gone to many of their local gigs. He had the talent and ambition and was a perfect fit.

Rick Rubin moved the band into Houdini's old mansion in the Hollywood Hills. It was haunted, which freaked Chad Smith out and he reused to sleep there. Everyone else lived in the mansion and supposedly they didn't leave for several months while recording Blood Sugar Sex Magik.

Flea's brother-in-law shot a documentary Funky Monks about the recording process. It's a great glimpse into the Chili peppers world circa 1991...


The Chili Peppers blew up because Blood Sugar Sex Magik became a mega hit. The Peppers arrived at the perfect time too because the L.A.-savvy band understood the leverage and power of music videos. Their initial videos were completely different than what you saw on MTV. The music was loud and funky but enough of an edge that you got some punk cred.

The overnight success of the band freaked out Frusciante. He quit at the height of their popularity. He'd spend the next few years shooting heroin as his house turned into something you'd see on Hoarders. Frusciante almost died because he set his house on fire after nodding out. Six or so years after he quit, Frusciante returned to the band right after Keidis got clean again. Everything aligned for those sessions during their comeback album Californication (1999).

During Frusciante's hiatus from the band, Dave Navarro (Jane's Addiction) stepped in as the lead guitar player. He was talented but definitely did not sound like either Frusciante or Hillel. The Chili Peppers only released one album during Navarro era -- One Hot Minute (1995) -- and it was awful compared to Mother's Milk (1989) and Blood Sugar Sex Magik (1991). You really can't blame Navarro mainly because Keidis was back on the sauce and ensconced in one of the darkest eras of his life.

In high school, I liked this girl (I went to an all-boys Jesuit school and she attended a nearby all-girls Catholic high school) who was into the Red Hot Chili Peppers. She made me cassette copies of Freakey Styley (1985) and Mother's Milk (1989). One of our first "dates" was a special punk show in Midtown that featured The Dead Milkmen2, a band that I fucking loved. It seemed like the perfect night... we could get in without IDs because it was a 16 and over show that featured each of our favorite bands. I don't recall much of my first Chili Peppers' show other than the fact I left black and blue and was mesmerized by a speedy rendition of Jimi Hendrix's Fire, which they played in what seemed like 90 seconds. 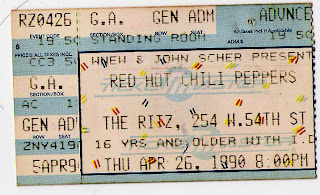 Sometimes you get introduced to a band because it's what other people like and then you find out that you like them too and don't have to fake it3. Luckily that happened to me. The relationship with the Catholic school girl lasted a couple of weeks, but for several years I had an affinity for the early Chili Peppers. They put out ten albums total and with the exception of Blood Sugar Sex Magik, their best stuff all happened in the 1980s when they were young, crazy, energetic, wild, and druggies without becoming full-time junkies. The post-rehab bloated version of the Chili Peppers is not for me.

The book is interesting even if you're not a fan of the Chili Peppers. If you don't like punk/funk or hate to read stories about people shooting up behind dumpsters or hearing about deviant sex with groupies, then don't bother reading the book.

The drug stories are not bragging, on the contrary, they are cautionary tales. At his worst, Keidis and his punk girlfriend didn't have a car (which is insane for native Angelenos) and they made daily treks from their apartment in WeHo and to Downtown (several miles) to score heroin. Many nights they used up all their money and didn't have bus fare, so they were forced to walk. Miles and miles. One of the funnier stories in the book happened the first time the Chili Peppers officially met Nirvana backstage. Courtney Love was there and she ran up to Keidis and said "You don't remember me?" Love used to live in L.A. during her days as a stripper and she used to see Keidis and his girlfriend Kim during their junkie hitchhiking days wandering around on the streets and she'd often give them lifts back to WeHo. Keidis didn't remember her because he was so fucked up.

Those are the little gems that add to Scar Tissue. It's really a multi-purpose book: a memoir, a book about addiction and recovery, a book about the Chili peppers, and a book about L.A.'s music scene in the 1980s.


1. Drummer Jack Irons often gets credit for helping form Pearl Jam. He knew a surfer dude (Eddie Vedder) in San Diego who was in a Chili Peppers cover band. When Jeff and Stone formed a new band called Mookie Blaylock, they were in search of a singer. Irons suggested they give Vedder a shot. The rest is history.

2. I was obsessed with The Dead Milkmen in high school, particularly their song "Debbie Gibson Is Pregnant With My Two-Headed Love Child."

3. It's refreshing to genuinely like a band someone turned you onto. Nothing was worse for me then pretending to like Jack Johnson because my girlfriend at the time loved him, but I suspected she knew I was full of shit when I'd start singing Jack Johnson lyrics in a Bob Dylan voice, or read random articles from the New York Times to the tune of Johnson's "Banana Pancakes."