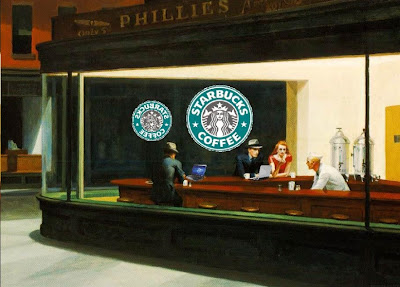 I found a rare empty seat at the Starbucks a couple of blocks away. Although I live on the wrong side of the demarcation line by a mere block, the Starbucks is on the right side of the tracks and considered Beverly Hills territory.

I sat down opened up a book. It took a mere 90 seconds before the fake-tanned shit-stain at the adjacent table put me on mega-tilt by talking loudly on the phone. I got a quick reminder why I avoided Starbucks at that time of the day (specifically 2pm). The conceited clientele. Wow, talk about a miserable and insufferable bunch of fucktards.

The non-white nannies employed in Beverly Hills take care of bourgeois babies with a pretentious names like Bella and Jayden. The nannies hog up aisle space pushing around gigantic top-of-the-line strollers (the size of Mini-Coopers). They're often spotted flipping through US Weekly while talking on their antiquated cellphones, presumably complaining about their slave-wage job and venting to another bored nanny.

The emaciated MAWs, clad in yoga-pants two-sizes too small or some other work-out attire, have immaculate make-up on their faces. They have not eaten more than 200 calories a day since 2002 and at least three of them tried out to be a Lakers Girl. The not-so-bright MAWs send the cashier on mega-tilt while rattling off their order in a condescending manner. The MAWs make a simple order of a "skinny sugar-free vanilla latte" more complicated that it should be. They take turns going to the bathroom to throw up. Oh, and they never fucking tip.

The suits don't really wear suits and most of them don't even have a tie or suit jacket with them because it's 82 degrees outside and only shyster lawyers or the head coach of the Lakers actually wear a suit and tie in this town. The consortium of independent business types are incessantly yapping away on their phones, mostly trying to show off in a weak-ass attempt to impress the model-types. Nine out of ten of these suits are struggling real estate dickwads (a high percentage of which are still digging themselves out of debt post-housing crash). Oh, and the other token suit is a wanna-be Ari Gold who hogs up all of the power outlets and trying to play super agent while desperately trying to sign the kid who played McLovin from Super Bad.

The screenwriters are the easiest to spot because they're the only ones not talking. They're all unshaven, mostly smell like weed and/or cigarettes, and wearing either a NY Yankees hat or an over-sized t-shirt featuring some sort of comic book brand. The writers diligently peck away on weathered MacBooks while re-working the third act denouement in their knock-off Fitfty Shades scripts.

Now, I have to remind you that this breakdown only happens before 2pm, because once it gets closer to 3pm, all of the high school and middle school kids invade Starbucks. When school lets out, the Starbucks becomes a zoo and the noise level quickly rises to annoying and uncomfortable levels. The nannies with strollers leave and they're replaced by a new batch of nannies who are tasked with buying blended Ice Mochas for the spoiled kids in their care. The suits react by talking louder and louder. The writers snarl, pack up their shit and abruptly leave.
by Pauly at 5/11/2013 05:55:00 PM