Editor's Note: I published the following entry to my poli-blog This Side of the Truth. Check it out.

In case you weren't paying attention, and by the lackluster TV ratings, most of America hasn't... the Democratic National Convention started on Monday. It was highlighted by an appearance by none other than Bill Clinton. I fuckin' love Bubba. For eight years he took hits from every side and came out "bulletproof." I was attentively listening to Bubba address the crowd while playing cards at my Monday night poker game. The DNC struggles to hold my attention. I feel like an eight year-old with ADD. After four minutes I get antsy and want to change the channel. Are the Democrats that boring? Yeah, when you actually have to say something aside from "Don't vote for the other guy!" and you don't have much of a platform aside from "We're not Bush!"... then there's not much to say. 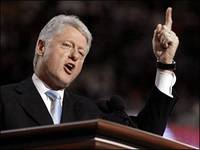 What's up with Hillary these days? I have this sneaky feeling she's going to vote for Bush, so that both John Kerry's and John Edwards' political careers come to a bitter end. She got only one thing on her mind... 2008. And she better start worrying. After an impressive stint at the podium from Barack Obama (Illinois), I'm starting to think he'll have a better shot of being on a ticket in 2008 than Hillary. He might even be our first Black President... well second if you count Bill Clinton. He can bring more newcomers and swing voters into the party a lot better than Hillary can. I expect the old broad to be pushed aside pretty soon. Her 15 minutes of fame is hitting the last few minutes.

Barack Obama... candidate for US Senate in Illinois

Without a doubt Obama was the highlight of Tuesday after America got their first real glimpse into the future star of the Democratic party. I dig the guy. He gave an excellent interview on Meet the Press this past Sunday. He's multiracial. He's well educated (Columbia, Harvard Law). He has grassroots experience. And he even has his own blog. Hillary ain't down with the hipster vote, just yet. But shit, if listening to an iPod while riding the L train to Williamsburg is going to get her votes, she'll fuckin' do it.

John Edwards spoke on Wednesday, and it was sad because he wasn't even the best speaker to date. He faired well and stuck to the script, but Rev. Al Sharpton was the MVP of the day after getting the crowd fired up for the first time all week. For fuck's sake it's sad when the most invigorating speaker at your convention is Al Sharpton.

I noticed that Ben Affleck has the hots for the other Kerry daughter, Vanessa. Jeez. Benessa. What's wrong with that possibility? Gwyneth > J. Lo > Vanessa Kerry? Are you kidding me? I think he wants to marry a rich chick that won't give a shit if he's dropping $250,000 playing poker at the Bellagio in Vegas. Rumors floating around the poker community suggest that J. Lo was not fond of the numerous hours he had logged at the poker tables in LA and in Vegas. Enter the daughter of a billionaire. So, what I want to know is Matt Damon going to starting banging Jenna Bush next?

The Good Doctor returned recently with a new article called Don't You Dare Cancel Football. If you didn't know, Hunter S. Thompson was the first writer who inspired me to become a writer. He blazed his way on the campaign trail with the boys in 1972, and I wish I could have gotten a chance to follow in his foot steps and cover an entire Presidential campaign. Here's a bit of his latest piece where he sounds off on gambling on politics:

So the time has come to get busy on what we call "the summer book" in the business of gambling on presidential elections. And right now the London/Vegas numbers are about 51-49 percent for Bush, if only because he is the filthy-rich incumbent and the son of a global oil-industry magnate.

That is big in the politics business; but this year, it will not be enough to make up for all the wretched, disastrous failures of the Bush administration. Betting on George Bush to win this coming election would be like betting the Denver Broncos to win the Super Bowl.

My own whim at the moment says that John Kerry will win big in November, and that the Colts will finally win the Super Bowl. Why not? This is the year of the monkey, and George Bush will be lucky to get out of Washington without being put on trial for treason.

I have to disagree with the Good Doctor here. Bush will win big... not Kerry. And he'll drop off the face of the Earth and end up ditching the Botox injections. He'll grow a hippie beard like Al Gore, start listening to Phish bootlegs and put people to sleep with his long-winded speeches.
by Pauly at 7/28/2004 11:25:00 PM