The Tao of Angela Chase and Jalen Rose 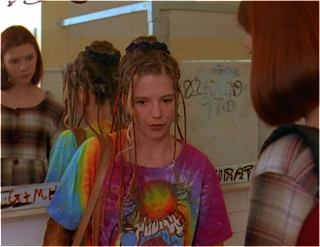 In college, I never thought I'd live to be 30. Not that I had a death wish, but I lived hard in my 20s and didn't think beyond the next six months, or the next six days. Most of the time, I wasn't even focused on the next six hours. You can say that I truly lived in the moment, which is why I had some of the craziest times in my life during those tumultuous periods in my roaring 20s.

As the years pile on and the hair starts to thin, then moments like those halcyon days seem like distant memories, or even a dream. Nicky and I were talking the other day about how films like Reality Bites and Singles were made when I was in college and how Friends hit the airwaves when I was a 20-something living in NYC. I can look at those bits of pop culture like they were opening up an old year book. I watch the music documentary Hype! (about the grunge era) every three or four months just to remind myself that even I was cool once when I was a longhair living in Seattle and sleeping on a mattress on the floor, and working a few jobs just to have money so I can buy booze, drugs, and concert tickets.


I saw an episode of My So-Called Life on TV the other night and it was the episode when Angela's square father scored tickets to the Grateful Dead (this was just before Jerry Garcia died in 1995) and he wanted to give it to Angela and her friends, because he had seen the Grateful Dead when he was 15 and it was one of the top 7 experiences in his life. I always understood what he meant because I saw my first Grateful Dead show at MSG in when I was 15! I didn't quite understand the scene being surrounded by older hippies, but it was an eye-opener and I never would have traveled on the road less taken if I didn't welcome those types of new experiences.

When Nicky and I watched that Grateful Dead episode of My So-Called Life, we cracked jokes about Angela eventually going on to work for the CIA in Homeland. I think it's much funnier if that actual character on Homeland was Angela Chase and that one day while she's chasing down Brody trying to blow up the Pentagon, she gets sidetracked because Jordan Catalono's band is in town and she has to go stalk him for a few hours.

Anyway, I had just graduated college when My So-Called Life came out and I was conflicted over my arousal of Emo-Angela. She was a high school jail bait, but I was fresh out of college so it wasn't too perverted.  It's now 2013 and I realize that the father in the show is a few years older than me and I should identify with him now more so than ever, except I don't have kids, so I really cannot relate other than the fact we're just middle-aged males who had amazing cosmic experiences with the Grateful Dead when we were 15 years old.

I don't want to live until I'm 90, or 80 for that matter and sitting in my own shit and severely ridden with dementia and have to have a Jamaican nurse sponge bath my balls. I lived hard in my 20s and 30s purposely to trim those horrid years. I think it was Dennis Leary (stealing a bit from Bill Hicks) about the reason he chain-smoked was to trim all those shitty years at the end of your life. Who wants those "golden years" anyway, especially with the fucked-up state of the medical industry and the empty promise of social security? But if you're senile, does it even matter if you cannot remember who you are and what you've done? The only positive aspect of Alzheimer's disease is if you've had a shitty life, then it's awesome to wake up every day and forget about that misery. Sure, you are in a constant state of panic because you have no fucking clue what's going on, but you don't feel disappointed about a life of shortcomings... like the promotion you never got, or the book deal that fell apart in the final stages, or your first failed marriage, or why all of your kids hate you.

When I finally made it to 30, I was leery about trying to get to 40 and somehow survived two car wrecks, including one serious one that I have no clue how I faded mortality. Every few months I think I did die and that I'm just haunting Nicky, my brother, and friends. Every day I wake up grateful for life because I can do the things I had not yet accomplished and get back on track to do the things I always wanted to do but never had the time to do when I got sidetracked with "real life" and a job in the poker industry. It's weird how one short-term assignment in Vegas lasting seven weeks in 2005 ended up becoming a whirlwind, international adventure that lasted seven years, before I finally decided to get off that crazy ride and take time off to reflect on those experiences and savor those accomplishments.  I guess you can say... when confronted with death, I finally stopped to smell the roses.

In my life 2.0 (approaching it's second anniversary), I have not driven a car in almost 600 days, but using the "life as a driver" metaphor, I don't exactly keep my foot off the gas. I'm not going to coast through life 2.0. If anything I feel there are times I'm pushing it even harder than I did before. Pedal to the floor. Balls to the wall.

The book Don't Sweat the Small Stuff hit the shelves in the late 90s and became a best seller. Some of it is basic philosophy, why most of it is essentially "stop giving a fuck about what other people think 9about you)." Sure, if there's anything that can mellow out people stressed out about petty things, then I'm all for that. Yet on some level, I felt the book was encouraging people to shine on situations and take the high road with a non-confrontational attitude. Some of that book coaxed lazy people into being more lazy and passive by ignoring assclowns and cunt-rags, which in turn allows those horrible people to continue to do horrible things. It's easier to ignore someone than to call them out on it. But let's face it... no one is willing to change until they get called out on it. Bullies will continue to bully you until you fight back. That's basic schoolyard survival 101. Want to stop someone from bullying you? Make them bleed.

The virtual world of the internet gives people a safe haven to be a dick. You can act like a jerkoff because no one will kick you in the junk, which is what would happen in real life if you were acting like a dickhead. Hence, the rise of the troll happened because there was no way to make them accountable for their actions in real life. But the best way to take away their power is to ignore them. Ever think why trolls become who they are? Because trolls are swimming in their own toxicity and they're ignored in real life, so they take out their frustrations anonymously on the internet. Fight fire with fire.

I've always had a "fuck it" attitude and a "live and let live" policy. At the same time, I'm no longer wasting my time on stupid shit. I've written a significant amount about shedding toxic/fake/superficial relationships, so much so I should write a self-help book. I sincerely think that if everyone got rid of that one family member or co-worker or so-called friend, then their life would be 350% better. The first time I really took this to heart was back in 2007, when Shane Nickerson wrote a post about the 30 keys to a happy life. One of them that stuck with me was... "Cut out people who bum you out."

It's hard not to hold grudges, but letting those go is the healthiest thing you can do. Grudges make you toxic. Sometimes the worst thing to accept is that the most toxic relationship you have is with yourself. The truth hurts and no one wants to realize that you have to cut out people who bum you out the most, but what if one of those bums are... you.

Yeah, holding grudges against yourself is super emo and nothing can be worse than self-loathing about why you're a self-loather. That's why you have to grab yourself by the balls (or by the tits if you don't have balls) and let yourself go. Once you shed your own toxicity, then you can start triaging the rest of the casualties your life. The U.S. government hides it nuclear waste in mountains or finds some third world country to pollute. You can try to hide your toxicity in the mountainous regions of your mind, but at some point in the future, all of that nuclear waste will seep into the ground water and pollute everything else. Don't create toxic waste. Don't pollute others with it. Don't store it deep inside your mind.

In a recent podcast by Jalen Rose and David Jacoby on Grantland, Jalen told a story about how he had a voicemail message asking the callers if they fall into a mathematical equation. "Are you here to add, subtract, multiply, or divide?"

Who thought that Jalen Fucking Rose was a true philosopher and understood people so well? Then again, when you go from a poor kid in the ghettos of Detroit and all of a sudden become a multimillion dollar athlete, you see the changes in the people around you. "When you get successful, you don't change," said Jalen. "But everyone around you changes. That's when conflicts occur."

Money makes people do crazy things. Jalen pegged people's intentions into those four categories. He had plenty of people trying to sponge off him and they were subtracting. He had people wanting to do fun stuff, and they added. The folks who wanted to do business deals with Jalen were multiplying. The last category was the most interesting. The people who wanted to divide were negatively people, or gossip hounds, and overall toxic friendships. Their entire modus operandi was to divide people and continue to cause frisson between individuals or groups.

In Jalen's world, you don't want to be a mooch or a divider. You want to add to the fun parts of life, or collaborate on something that could be beneficial to the core group (financially or socially).

At the end of the day, which one are you? Someone who adds, subtracts, multiplies, or divides?